Authenticity and Truth in the #MeToo Era

You'll never know for sure what's in someone else's heart. But forgiveness can be as much about what we owe ourselves as what someone else deserves. 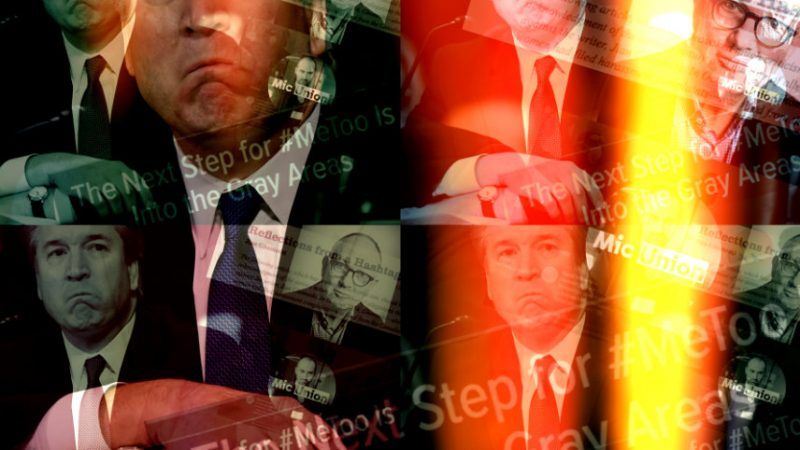 Supreme Court nominee Brett Kavanaugh has been accused of sexual misconduct ranging from flashing to attempted rape. Some of the accusations were the subject of widely televised testimony in the Senate last week. Conventional wisdom now holds that it was Kavanaugh's personal performance during this testimony—not the believable but unprovable allegations of his first accuser, Christine Blasey Ford—that tanked the judge's credibility among the persuadable.

Those who have been swayed against Kavanaugh cite his vague and sometimes implausible answers about his high school and college life outside of the alleged assaults. They argue—in tweets, essays, explainers—that his shiftiness should serve as a mark against him, even if it's not necessarily evidence that he's guilty of sexual violence. That he may not have lied outright, but his evasive and emotional performance was still potentially disqualifying.

Whatever more serious things Kavanaugh may or may not be guilty of, his antics inspired suspicion that the perfectionist public persona was but an exquisitely constructed mask. Kavanaugh's credibility crisis isn't about belief (or lack thereof) in any particular set of facts but a perceived absence of authenticity in the nominee overall.

What exactly is authenticity? For some time, it's been a powerful buzzword. Social media marketers, millennial whisperers, politicians, and restaurants all touted it. We were told that authenticity was what hot demographics were craving and missing—in their lives, their processed meats, their travel experiences, their "news brands." It was the key to selling yourself as an "influencer." It was the key to winning elections.

But authenticity is a fuzzy concept. Hillary Clinton has always suffered from a lack of perceived authenticity, even among people who would also describe her as honest. Meanwhile, President Donald Trump is often credited with an abundance of authenticity—a man who calls it like he sees it—even among those who admit that he's not always 100 percent truthful. Instagram stars can have authenticity even while shilling and staging and posing. So too for celebrities whose stage-managed endeavors strike the right notes.

Authenticity isn't related so much to universal truths as loyalty to your inner truth—an honesty about who you are and where you're coming from. Being authentic only implies being worthy of belief that you are indeed authentic.

The Anatomy of Gray Areas

Authenticity—or a lack of it—lurks in many recent "gray area" discussions around sex and relationships. Take this recent piece, published by the feminist site Jezebel, about a former editor at the millennial progressive publication Mic.

The editor, Jack Smith IV, had built a high-profile career exposing right-wing "fascists" and championing social justice causes. But the article alleges that in private, Smith was far from the feminist-minded good guy he had built his public brand on. Shortly after the article came out, Mic placed Smith on temporary paid leave; he was fired a few weeks later.

The author of the Jezebel piece, Julianne Escobedo Shepherd, lays out a litany of Smith's alleged abuses against women he dated or hooked up with, including telling one woman he wouldn't have sex with her unless she wore specific eye makeup and berating another for hours because she said she was slightly younger than she was. For the most part, it's the kind of stuff that falls into the category of caddish, lame, or unsavory behavior without being criminal—the so-called gray areas.

Only two of the article's many allegations about Smith include claims of non-consensual acts. One woman accuses him of foregoing a condom without her permission during (otherwise consensual) sex. She also says that during the sex, Smith "wrapped his bicep around my neck and restricted my breathing," ignoring her when she asked what he was doing. In neither instance, however, did she tell him to stop, according to this article. Their relationship continued "for several months."

One of the charges lobbed against Smith is that he had sex with a woman after she explicitly consented to it, told him to get a condom, and told him to be rougher. She alleges that she only did those things because she was feeling insecure and guilty. This is presented not as a story about women struggling with sexual assertiveness but as a failing on Smith's part.

Throughout the piece, Shepherd pivots between positioning it as a big-picture story about sex and power and a particularized case against Smith. Ultimately, both frames feel incomplete. What can we really take away here, other than that Smith seems like a drag to date? The author shies away from providing a coherent model of consent and good sexual etiquette. "Manipulative behavior and sexual coercion of the type Smith is accused is notoriously difficult to define," she writes.

Ultimately, Smith's real sins seem to be less about specific boundaries crossed than about how his alleged treatment of women doesn't match the feminist airs he put on in public. It's an alleged authenticity deficit that doomed him.

At least some jerks have the honor to be authentic about who they are. Perversely, these types are generally better positioned to weather exposure of bad behavior. Meanwhile, the hypocrisy of sneakier jerks adds fuel for the flaming pitchforks.

The Wisdom of Villains

Another recent authenticity-crisis casualty was Ian Buruma, editor until last month of The New York Review of Books. This time, it wasn't Buruma's own authenticity that was called into question; it was an article he published by the former Canadian radio host Jian Ghomeshi.

In 2014, Ghomeshi was fired from his job and declared a pariah in the media after nearly two dozen women accused him of not respecting boundaries during sexual encounters. A court indicted, then acquitted, him on charges in six of these cases. He settled with one accuser out of court.

Buruma said he accepted the Ghomeshi essay because he was interested in hearing from someone on the far side of public disgrace. But it failed to include some key facts and was widely seen as an inauthentic attempt at rehabilitation that The New York Review of Books should not have published.

In post-publication interviews, Buruma posited that we need neither moral purity nor authenticity from someone to learn from them. Buruma told Slate he was interested in what it was like being "at the top of the world…and then finding your life ruined and being a public villain and pilloried. This seemed like a story that was worth hearing—not necessarily as a defense of what he may have done." Critics retorted that no form of the essay would have been acceptable.

Personally, I agree the piece left much to be desired. But I also think Buruma was on to something. There can be value in the wisdom of villains.

Around five years ago, a person who helped get me through one of the roughest periods of my life was concurrently going through his own Jack Smith IV–style fall from Male Feminist hotshot to disgraced creep. Unlike Smith (who has been basically missing online since the Jezebel story came out), this man couldn't shut up about it, chronicling his job losses, marital breakdown, and mental-health decline in an alarmingly public and realtime fashion.

I never suffered any delusions about his moral culpability—most of the things causing crowd consternation came from his own past writing. He had been given a pass for past transgressions by confessing them and claiming to be redeemed. But this redeemed self was at best an idealized vision he tried and failed to live up to, at worst a calculated deception designed to optimize his online brand and predatory potential. The feminist internet in which I lurked and worked then was in a tizzy over which it was, how he pulled off the con, and who had enabled him.

I reached out directly. I wanted to know something beyond the tweets. I wanted to understand, or at least glean more data for my analysis about how someone could so loudly preach one thing and live another. I was curious, supremely bored, and going through a career, relationship, and all-around rough patch. I was feeling down. Then depressed. Then worse.

For a brief but intense time, we struck up a strange long-distance friendship. What started as an amused bid to ascertain his authenticity became something darker, weirder, more desperate. He slipped in and out of the hospital, headlines, and social media mobs. I imbibed him as a much needed distraction, puzzle, mentor, monster, and cautionary tale.

I never did make much headway on getting to any truth about him. But that had ceased being the real point. I had needed help and (though I didn't consciously think of it like this then) seized upon him because I supposed he had both experience and no room to judge.

In the five years since I watched along online as he lost almost everything, I've watched him build a new life, one that revolves around his kids, therapy, working at a grocery store, adoring his new girlfriend, staying out of the spotlight, and staying humble. Is this the work of a master sociopath, or a once-again redeemed man?

We all like to think we can tell the bullshitters from the genuine believers and repenters. We use these wispy calculations to get to what's often considered the crux of the redemption issue: Have they earned it? Do they really deserve another chance? Certainly, no one is owed an opportunity to plead their comeback case. Yet "platforming" them isn't really the problem so much as failing to put what they have to say in proper context.

I want editors, curators, and gatekeepers who are better and smarter than the con men. But also ones open to the possibility that sometimes, the con men can still teach us about ourselves.

There's much talk lately about who deserves a second chance and how to tell when they do. Some folks almost everyone agrees do not deserve it—your Harvey Weinsteins and Bill Cosbys. Those who commit violent or myriad crimes. Whether Brett Kavanaugh falls into this category remains an open question.

But what about Jack Smith IV? Aziz Ansari? Louis C.K.? Al Franken? Avital Ronell? These "gray area" perpetrators present more room for debate. Here, authenticity becomes central, perhaps even more so than the truth of the specific accusations. Is their repentance really sincere? How do we square the now with the then?

Not even those specifically trained to tell truth from lies—judges, police, etc.—do much better than anyone else at it. What hope, honestly, do the rest of us have? Outside the cases where someone is caught in the act of contradicting his own redemption narrative, it's an unfalsifiable proposition.

You can drive yourself crazy trying to know for sure what's in someone else's heart. You'll still fail. Luckily, forgiveness can be as much about what we owe ourselves as what someone else deserves.

Forgiving someone—friends, lovers, public figures, internet strangers—doesn't mean you need to hang out with them or support their work. It's a means of letting go of the corrosiveness of harboring hatred. Relinquishing the idea that there are tell-tale gives about the state of someone's soul if you just watch closely enough.

Accountability and authenticity are important, but they're not everything. And whether we're talking about personal growth or social change, focusing too much on parsing particular motives and taking down individual enemies can get in the way.

A more productive moral imperative is getting at the underlying systems that allow bad actors in your own world or the world at large to thrive. But this is hard to come by in a culture intent on making people pay in perpetuity for their interpersonal failings. Right now, the media are too eager to draw lines in permanent marker around both villains and victims, while the rules for each category are scribbled in disappearing ink.