Temperamental centrism and case-by-case decision-making, on Brett Kavanaugh and other issues, irritates nearly everyone-and is necessary. 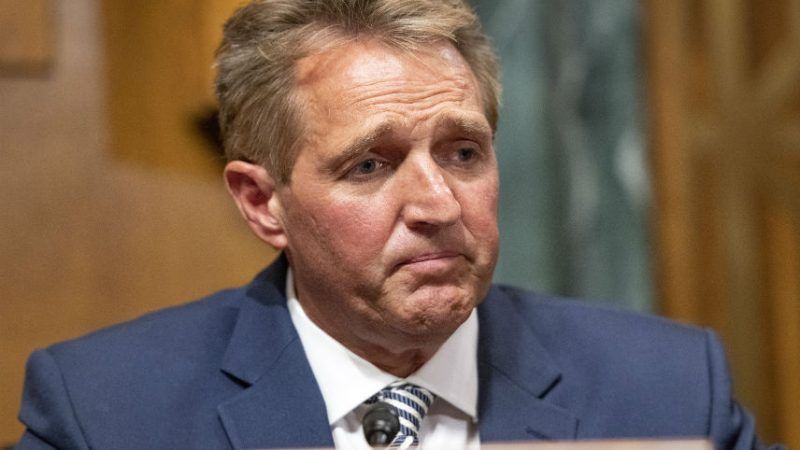 It wasn't just elevator-activists Ana Maria Archila and Maria Gallagher who were furious at Jeff Flake Friday morning, after the soon-to-retire Republican senator from Arizona began arguably the craziest day of his tumultuous past two years by announcing that he intended to vote "yes" to confirm embattled Supreme Court nominee Brett Kavanaugh.

"I wish I could say I am surprised by Jeff Flake," Washington lifer Norman Ornstein tweeted. "Sadly, I am not. Party wins again….He failed the moral test." In blue-checkmark land Flake was a "coward," a "poisonous jellyfish that looks harmless because it has no spine yet still manages to sting you." The clickservative right, meanwhile, rallied temporarily to one of its least favorite senators. "I have plenty of disagreements with @JeffFlake but I am so proud that he is taking a stand and voting yes on Brett Kavanaugh," wrote Candace Owens. "Stay strong!"

As we know, Flake did not stay strong, at least by #MAGA measurements. Instead he played Hamlet, dramatically delaying a Senate Judiciary Committee vote (during which Twitter lit up with cracks like, "Would any serious writer even dare invent a character called Senator Flake who can't seem to make his mind up whether to back his own side?"), before finally announcing his initially confusing deal to send Kavanaugh's confirmation to a full Senate vote in exchange for spending up to one additional week on an FBI investigation into existing allegations into Judge Kavanaugh's alleged sexual assault as a youth.

Now, as Flake prepares for a joint 60 Minutes interview Sunday with his friend and compromise partner Sen. Chris Coons (D-Del.), most partisans on both sides have retreated to their usual position: Hating Jeff Flake. He's an "out of touch narcissist," said Fox News Channel host Laura Ingraham. Countered Linda Stasi in the New York Daily News, "While it looks like Sen. Jeff Flake found a backbone, the truth is, he did exactly what every Republican did so successfully during the entire ugly, disgraceful hearing of Supreme Court nominee Brett Kavanaugh—he tried to appear both empathetic and strong while acting every inch the coward."

There is no place more despised in American politics right now than the center. Not the ideological center, necessarily, but the temperamental center. That space inhabited by people who recoil instinctively from bloody-knuckled partisanship and the collectivist demonization it requires, who lament the erosion of democratic norms and the delegitimization of mediating institutions. At a moment of intense polarization, when the time for choosing was yesterday, who has the patience for such scoldy fence-sitters?

You can find a lot of libertarians in this unhappy camp, averse as they usually are to the tribal political hysterics of the day. Flake is among the most libertarian members of the Senate; in the House, arguably the most temperamentally centrist member is the one who prefers describing himself with the (as-yet lower-case) l-word: Rep. Justin Amash (R-Mich.). Amash's Twitter feed these days is filled with such cheery observations as, "Political discourse today is driven almost entirely by tribalism and bias and very little by principles and truth. We've come to a sad and dangerous place. Liberty cannot survive without virtue."

But you can find a lot of anti-libertarian people in the temperamental center as well. Bill Kristol. John Kasich. Benjamin Wittes. The late John McCain, and the D.C. establishment that mourned him (and its own receding power) for a week last month. There is a whole cadre of anti-Trump conservatives who have not yet come to grips with the way their support for war, surveillance, spending, bailouts, and wink-nudge populism helped discredit their precious establishment in the first place.

Jeff Flake is coming from a more consistently principled position. In 2006, when many of today's noisy #NeverTrumpers were in the Bush administration governing poorly and doubling the national debt, Flake, then a congressman, was keeping it real with Reason's Katherine Mangu-Ward: "You look at any measure of spending—overall spending, mandatory, discretionary, non-defense discretionary, non-homeland security spending—whichever way you slice it, the record looks pretty bad."

Pox-on-both-houses centrism, even with some libertarian flavoring, does not always lead to wisdom. Setting your own coordinates by the position of the other two poles is reactive, unsteady, a recipe for squishiness. (This is one of many reasons why, even though there are many of libertarians who can be found in the temperamental center, there are a lot of other, more anarchistic libertarians who positively hate that place and the people associated with it.)

As I recounted in a column last December, "Flake moved to confirm as attorney general Jeff Sessions and, before that, Loretta Lynch. Both are abysmal on civil asset forfeiture, a form of government theft the senator has long decried. He voted in favor of the authorization for use of military force in Iraq, though he later turned against the war. He advocated missile strikes on Syria in September 2013 and again when President Trump lobbed some in April 2017." His hands are not spotless.

But after a week as ugly as the one America just experienced, there is value in having a sensitive soul near the levers of power. "The U.S. Senate as an institution—we're coming apart at the seams," Flake told The Atlantic's McKay Coppins. "There's no currency, no market for reaching across the aisle. It just makes it so difficult."

Just these last couple of days—the hearing itself, the aftermath of the hearing, watching pundits talk about it on cable TV, seeing the protesters outside, encountering them in the hall. I told Chris [Coons], "Our country's coming apart on this—and it can't." And he felt the same.

Cue a million cynics playing their tiny violins, and 10 million partisans finding holes in the Flake-brokered settlement. And yet.

The Republican position, until Flake intervened, was the one articulated forcefully by Sen. Lindsay Graham (R-S.C.) on Thursday: Democrats sat on the confidential allegation by Christine Blasey Ford until the last minute, deployed it cynically (and in violation of Ford's desire for confidentially) only as a last-gasp measure, then used the resulting media storm to delay, delay, and delay some more. "If you vote no," Graham snarled at his Republican colleagues, "you're legitimizing the most despicable thing I have seen in my time in politics."

This was both persuasive argument and ominous warning. It is damn near impossible to view the two-party divide in America right now and imagine it getting anything but much worse. Might, not right, is the rule of the day. Inconvenient individuals will be like cockroaches on a steamroller. Meanwhile—not a small point, this—a lifetime seat on the Supreme Court hangs in the balance less than 24 hours after searing testimony that made the accuser look more credible and the accused somewhat less so, while also underlining that corroborating evidence was practically non-existent (in part because the committee inexplicably ruled out subpoenaing alleged witness Mark Judge).

So what to do?

Commentators in the temperamental center—Timothy P. Carney, Megan McArdle, Ross Douthat—proposed variations on the same theme: Just investigate a bit longer, clear up some of the more soluble disparities, and schedule a prompt vote. The non-grandstanding Democrats on the committee (basically Klobuchar and Coons) articulated a similar bargain.

But it took a haunted-looking Flake, reportedly operating on zero sleep, normally handsome face puffed up with five extra pounds of frown, to make that reasonable and de-escalatory framework a reality. The libertarian wing of the temperamental center delivered a result that at least temporarily forestalled the worst of American smash-mouth politics.

The resulting FBI investigation is already being circumscribed and contested. The chances of votes being significantly changed look preliminarily small (Flake himself has said that he hopes to vote yes). It's always a safe bet that each new week of American politics will be worse than the last.

Which means only one thing: Sooner rather than later, voters can get back to hating Jeff Flake. And wishing there were more like him.