Debate: Libertarians Should Be Vegetarians

Do animals have rights that humans must respect?

Michael Huemer and Daniel D'Amico | From the October 2018 issue 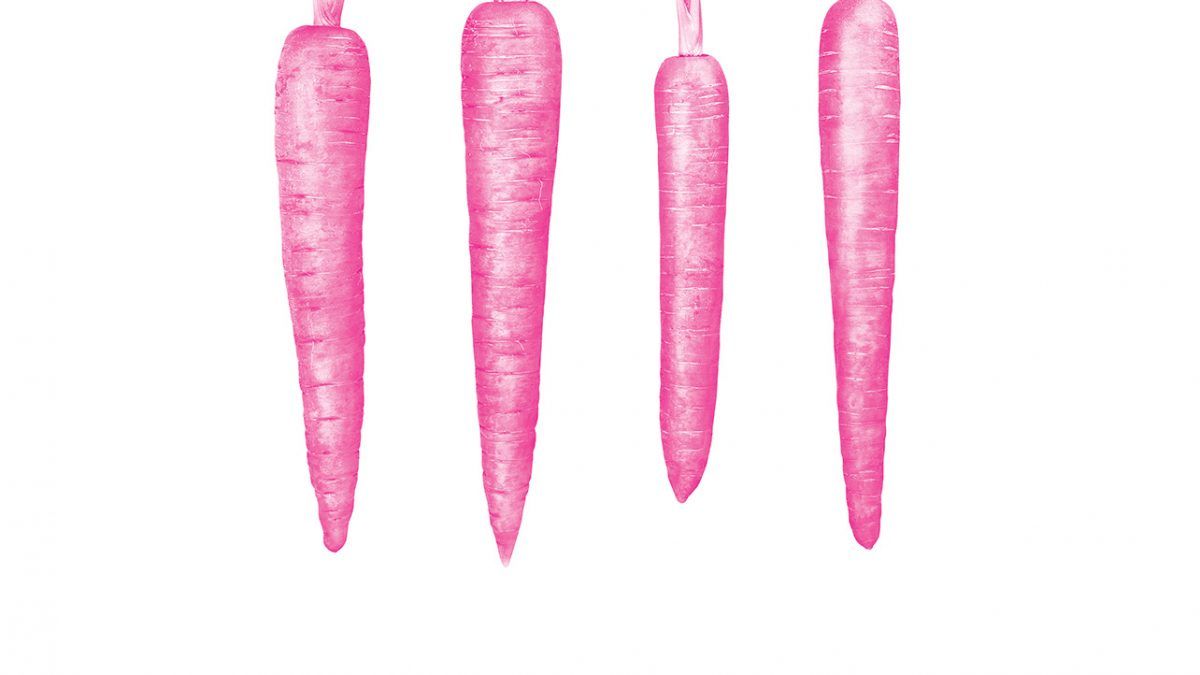 AFFIRMATIVE:
I'm a Vegetarian and You Should Be, Too

Worldwide each year, human beings torture and kill approximately 56 billion animals for our gastronomic pleasure. Two years of factory farming slaughters more animals than the total number of human beings who have ever existed on the earth.

I believe meat consumption is, in almost all actual cases, morally wrong. My basic reasoning is simple and obvious: (1) pain and suffering in itself is generally bad; (2) it is wrong to cause an enormous amount of bad for the sake of relatively minor benefits for oneself; (3) human meat consumption causes enormous pain and suffering for the sake of relatively minor benefits for us; therefore, (4) human meat consumption is, on the face of it, wrong. This strikes me as about as difficult as the case against torturing babies.

Why do I say only that it's wrong in "almost" all cases? Well, there are exceptions. If you must eat meat to survive, that will typically outweigh the prima facie wrongness of eating meat. I will not try to catalog all the possible reasons sufficient to justify meat consumption. In the overwhelming majority of actual cases, meat eaters do not have any reasons that could plausibly be claimed to justify the pain and suffering caused by their practice.

The moral premises of the argument are (1) and (2) above. I believe them for the same reason that I believe it is wrong to attack people, wrong to steal, right to keep promises, and so on: These things seem obvious on their face. Usually, a reasonable starting point is simple propositions that seem obvious on their face, provided we have no specific grounds for doubting them. If we can't assume (1) and (2), then I don't know why we should assume any moral proposition is true. I'm not asking you to accept some grand philosophical theory. I'm just asking you to agree that we shouldn't cause enormous pain and suffering for trivial reasons.

The most common objection meat eaters give when confronted with this sort of argument is that because animals lack intelligence (or the faculty of reason, or moral agency, or something similar), they also lack rights, or their interests do not matter.

I don't know what the basis for rights is, and—almost certainly—neither do you. There are many theories of rights in the ethics literature that have about the same level of vague plausibility but have different implications for who has and doesn't have rights. I accept rights because the idea seems to account for such things as why one may not kill a healthy patient in order to distribute his organs to five other patients who need transplants, why one may not frame an innocent person in order to prevent riots, and so on. But that doesn't tell me whether and which animals might have them.

Whatever the situation may be as regards "rights," however, and whether or not there even are such things, I do know that one should not cause vast pain and suffering for trivial reasons. Nothing about human intelligence explains why it would be acceptable to do that. Being capable of carrying out complex deductions, or grasping abstract objects, or regulating one's behavior according to normative beliefs, does not somehow change that underlying truth.

That is the core point; everything else is a distraction.

Yet while few people explicitly favor animal cruelty, few are prepared to change their own diets. One reason is that most people don't take time to reflect on moral principles. Another is that most fall prey to "status quo bias," which causes us to instinctively reject any radical criticism of current practices. Status quo bias is why many refuse to take seriously the arguments I make on such topics as vegetarianism, open borders, government regulation, and anarchism.

One might hope that libertarians would be more receptive to vegetarianism, since we tend to reflect on moral principles in a way free from status quo bias. Unfortunately, we libertarians are subject to other biases. Most of us have some discomfort with the political left, and animal welfare is seen as a "left-wing" cause. In addition, we tend to be relatively low in empathy even for our fellow human beings, and empathy for other species is more difficult than empathy for one's own.

Despite these stumbling blocks, libertarians should choose vegetarianism. Almost all meat comes from factory farms. No one who looks at the practices of such farms disagrees that they are extremely inhumane. They would be uncontroversially labelled "torture" if any person were subjected to them.

In view of the vast numbers of animals involved, this could be the greatest problem in the world today even if human welfare is thousands of times more important than animal welfare. Yet whether or not it is literally the worst, it is hard to see how factory farming could fail to be an extremely serious problem. Those of us who are disposed to act from moral principle should take a stand here and stop going along with the status quo.

NEGATIVE:
Don't Prioritize the Well-Being of Animals Over Humans

Adhering to religious dietary customs is totally legitimate, perhaps even admirable, behavior. Thus, when I say "vegetarians," I don't mean Catholics during Lent, Jews avoiding pork, Muslims keeping to halal, and so on. I'm instead referring to that newly popular category of secular killjoys who avoid meat because of their moral beliefs about animal rights. I include all forms of non-meat eating under this broad umbrella term. For my purposes, if you only eat fish, you're a vegetarian. If you're a vegan who also abstains from eggs and dairy, you're a vegetarian.

Vegetarians prioritize the well-being of animals over people, and there is nothing moral about that. How many baby seals would you club to death to save the life of a human child? Presume, for argument's sake, a lifeboat scenario where this is a real trade-off. I think the right answer is "all of them."

Most people don't want to club baby seals, and many would find it deeply unpleasant. But even they would likely concede that a human child is more valuable. In my mind, this calculus doesn't change if it's the first seal, the hundredth, or the thousandth. If you clubbed 99 seals only to then say, "That's my limit—I can't in good conscience do any more," from my perspective, a human baby is dead because of you. The point is simply that human well-being is vastly more important than animal well-being, and the vast majority of adults express this truism in their daily behaviors when they eat meat.

Here's where these debates get weird. Vegetarians will proclaim, "But that's how society used to think about slavery." Yes, but animals are not humans. Many species are intelligent, feel pain, and exhibit complex ranges of emotions, but these are not sufficient criteria for establishing or enforcing animal rights.

Humans can hold other people accountable for damage or harm done to animals they own, which is to say that animals can "borrow" human rights. But animals do not have the capacity to possess rights themselves. That is why the slavery analogy breaks down. Even the most oppressed slave was capable of living in human society as a moral and political equal. Pigs, chickens, and cows cannot do that, because nonhuman animals are incapable of learning, abiding by, and being held accountable to human laws. Rights are more than just the outgrowth of moral populism.

The abolitionists were acting on moral concerns, but their activism was reinforced by the practical reality that slaves were human beings with full potential to contribute as free members of society. Economic growth increased after enslaved people were freed. Emancipation improved the well-being not only of the former slaves but of humanity as a whole, which has subsequently enjoyed the benefits that spill over from generalized material progress. That's why political equality across race and gender lines has thankfully endured, reaching far beyond the realms inhabited by moral activists.

In contrast, to liberate livestock from agriculture would not just impose a loss of human welfare—it would all but devastate the populations of domesticated species, which rely on humans for their survival and certainly cannot contribute to society on their own. If factory farming is analogous to slavery, to advocate for vegetarianism is to advocate for genocide.

OK, but shouldn't people at least choose products that involve less suffering? In fact, prices are remarkable conduits of information. When producers utilize a certain method of bringing goods to market, it is because they've concluded that, given consumer preferences, there is no better use for the resources at their disposal. Conscientious consumer movements proclaim to know better, yet real people continue to show via their dollars that they highly value access to meat.

Technological developments are great, but there's no free lunch. Lab-grown meat, like traditional meat, relies upon a complex division of labor: Miners must still extract materials to make the needed tools, truck drivers must still make the alternative deliveries, etc. And importantly, your decision to buy fake meat, or none at all, does virtually nothing to reduce animal suffering. When vegetarians act collectively as part of a consumer movement, they shift demand for traditional meat inward (in economist's parlance) thus reducing the price for others. Poor people probably appreciate this, as it affords them the opportunity to buy more of it.

Even if animal welfare is less important than human welfare, you might think, factory farming is really icky. My response is: Compared to what? What's literally inhumane (in the sense of "not done by humans") is eating animals alive—a practice most other carnivorous animals engage in, and which nearly all species of prey are subjected to in their natural habitats.

Factory farms aren't designed to maximize suffering. They, like all production chains, are emergent outcomes that look to maximize productivity within the constraints of prices, technological capacities, and consumer wishes. Might some aspects of the process be unpleasant to view from a privileged vantage? Of course, but producers are better informed and better incentivized to know how the system can be improved upon than are vegetarian activists.

Michael Huemer is a professor of philosophy at the University of Colorado and the author of five books, including The Problem of Political Authority (Palgrave Macmillan).