Will Republicans Pay a Political Price for Trump's Trade War?

The GOP's willingness to follow Trump down an anti-trade cul-de-sac risks alienating voters who could be crucial on the margins of close races. 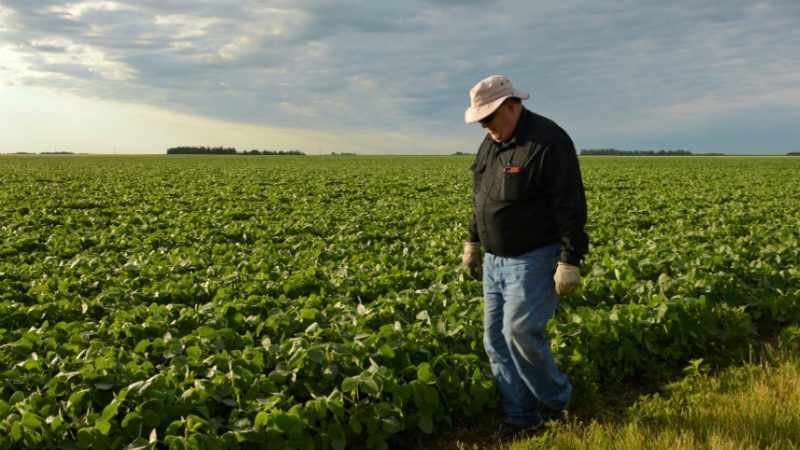 China is canceling contracts to buy soybeans from North Dakota farmers, costing the state "hundreds of millions of dollars worth of business," says Charles Linderman, standing knee deep in a field of soy plants and looking directly at the camera.

The ad, launched last week by Sen. Heidi Heitkamp, takes direct aim at comments made by her Republican challenger, Rep. Kevin Cramer. Linderman accuses Cramer of "attacking farmers" who complain about the costs of the trade war. All politics are local, and North Dakota's status as one of the nation's leading producers of soybeans means that the consequences of Trump's trade war with China will be litigated more intensely in this Senate race than in many others happening this fall.

Still, there is a national angle hinted at in the Heitkamp ad too. Should voters continue to trust Republicans, the ad seems to ask, with so much control over the economy?

It's a fair question, since Republicans in Congress largely have been happy to turn a blind eye to the ill-advised—and potentially illegal—protectionist measures pouring out of the White House this year, even as the costs of the trade war have started piling up. Farmers have been particularly hard hit, but new rounds of tariffs announced last week by the U.S. and China will spread the pain around by hiking prices on a wide range of consumer goods.

History suggests that raising taxes is a surefire way to find your party out of favor with the electorate, and tariffs are taxes on imported goods, so it seems like voters will eventually get around to blaming Republicans for the trade war. But how soon will that happen?

In places like North Dakota, where the soybean harvest will come before the midterm elections, Republicans face a greater risk that the trade war's economic pain will lead to voters delivering political pain. But the newest round of tariffs seems carefully—some might say cynically—calculated to hit hardest after the midterms and after the holiday shopping season. The 10 percent import taxes taking effect Monday will transform into 25 percent tariffs on January 1 of next year.

Even if the consequences are not yet being felt, the tariffs have created a political opportunity for Democrats in crucial Senate races. Politico reports that Democrats are pressing the trade issue in Arizona, Florida, Indiana, Missouri, Montana, and Nebraska—a set of states that are likely to determine control of the chamber.

In those states, Democrats may find fertile ground for a pro-trade message from voters who have become disenchanted with Trump-style protectionism, as well as those who never supported it in the first place.

Indeed, Republicans may be confusing conservative support for President Donald Trump with support for his administration's policies. Trump used his celebrity and culture-war issues to win over conservatives, but that's hardly the same as convincing voters that autarky is preferable to trade. Polls show that most Americans do not believe tariffs will improve the economy.

And while Republicans are more likely to be skeptical of the North American Free Trade Agreement (NAFTA), which Trump has threatened to tear up even as he tries to renegotiate it, voters generally believe it has been beneficial to the country.

On the more basic question of whether international trade is good or bad, a recent Morning Consult poll of Ohio voters found a nearly two-to-one edge in favor of trade.

The GOP's willingness to follow Trump down an anti-trade cul-de-sac risks alienating voters who could be crucial on the margins of close races. It's an unforced political error. Democrats were unlikely to pivot to trade issues in key Senate races like those in North Dakota or Indiana if the Republican hadn't created that opening.

In short, a farmer like Linderman would not be starring in an campaign ad if Trump hadn't ignited the trade war.

What have Republicans gained in exchange for creating this new political vulnerabilty? Chinese officials pulled out of scheduled trade talks this week after the new tariffs went into effect, the promised renegotiation of NAFTA is far from finished, and the White House has already had to promise a $12 billion bailout for farmers hurt by the trade war. In other words: nothing.

If the economic consequences of tariffs won't get Republicans to reconsider their support for Trump, perhaps the political consequences will.