Gorsuch's Record Was More 'Liberal' Than Kennedy's This Term

Of course, Gorsuch had his share of clashes with the liberal bloc too.

Damon Root | From the October 2018 issue 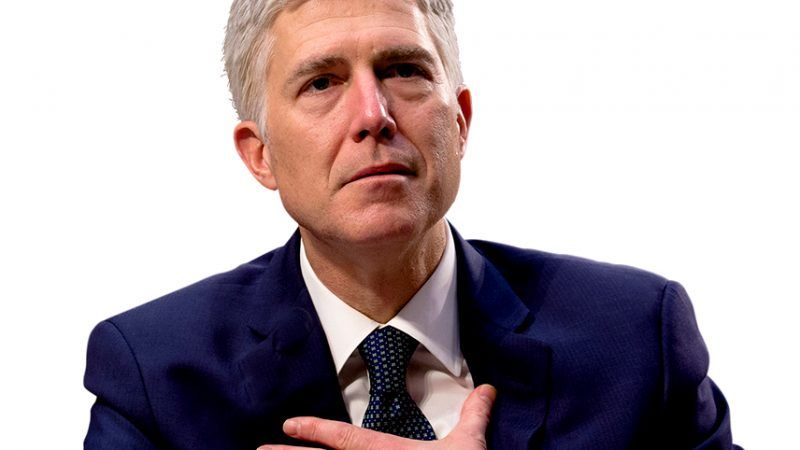 Kennedy did not join the Court's liberal bloc in a single 5–4 decision in the entire 2017–2018 sitting. That's unusual. In previous terms, Kennedy's fifth vote decided such contentious issues as gay marriage and abortion.

Gorsuch, on the other hand, did side with the liberal bloc in Sessions v. Dimaya, which struck down a provision of the Immigration and Nationality Act dealing with the power of the federal government to deport any alien, including a lawful permanent resident, convicted of an "aggravated felony." Justice Elena Kagan wrote for the majority, joined by Justices Ruth Bader Ginsburg, Stephen Breyer, and Sonia Sotomayor. Gorsuch, who concurred in part and joined in the judgment, provided the tie-breaking fifth vote.

Thanks to Dimaya, it is now more difficult for the federal government to deport certain aliens under federal immigration law.

Gorsuch's views also look more liberal than Kennedy's when you consider their respective approaches in Carpenter v. United States, the blockbuster case in which the Court held that a warrantless government search of cellphone location data violated the Fourth Amendment.

Technically, Kennedy and Gorsuch both dissented from the Court's 5–4 judgment. But the content of their opinions was entirely different.

Kennedy thought the Court should have let the warrantless search stand. "Individuals have no Fourth Amendment interests in business records which are possessed, owned, and controlled by a third party," Kennedy wrote, joined by Justices Clarence Thomas and Samuel Alito. Cellphone records "are no different from the many other kinds of business records the Government has a lawful right to obtain by compulsory process."

Gorsuch, by contrast, dissented because he favors "a more traditional Fourth Amendment approach" that asks "if a house, paper or effect was yours under law." Cellphone records, he observed, "could qualify as [your] papers" for Fourth Amendment purposes.

But because that argument was not raised by the litigants, Gorsuch felt he had no choice but to advance his position via dissent. He then used his opinion to invite future litigants to make arguments grounded in the amendment's "original understanding," a development that could prove very unfriendly to the wishes of law enforcement.

Of course, Gorsuch had his share of clashes with the liberal bloc too.

Consider Epic Systems Corporation v. Lewis. Here's how Gorsuch summarized the case: "Should employees and employers be allowed to agree that any disputes between them will resolve through one-on-one arbitration? Or should employees always be permitted to bring their claims in class or collective actions, no matter what they agreed with their employers?" Gorsuch's 5–4 opinion held that employees and employers have the legal right to make contracts that include one-on-one arbitration. He was joined by Chief Justice John Roberts and Justices Kennedy, Thomas, and Alito.

Writing in dissent, Justice Ruth Bader Ginsburg argued that the best reading of applicable federal law was that "employees must have the capacity to act collectively in order to match their employers' clout in setting terms and conditions of employment."

Upping the rhetorical ante, Ginsburg then accused Gorsuch of seeking to resurrect the Supreme Court's "Lochner-era contractual 'liberty' decisions." She was referring to Lochner v. New York, a 1905 ruling that invalidated a state economic regulation on the grounds that it served no legitimate public health or safety purpose. For a jurist like Ginsburg, Lochner is a dirty word; she even favorably cited the late conservative legal thinker Robert Bork, who attacked Lochner as "the symbol, indeed the quintessence of judicial usurpation of power."

Gorsuch responded directly to this critique, writing that "instead of overriding Congress's policy judgments, today's decision seeks to honor them. This much the dissent surely knows. Shortly after invoking the specter of Lochner, it turns around and criticizes the Court for trying too hard to abide the Arbitration Act's 'liberal federal policy favoring arbitration agreements.'"

As for Ginsburg playing the Bork card against him, Gorsuch responded in kind, citing the liberal legal thinker Laurence Tribe, who wrote that "'Lochnerizing' has become so much an epithet that the very use of the label may obscure attempts at understanding." In judicial circles, that's what you call a sick burn.