There Is Nothing 'Illegitimate' About the Brett Kavanaugh Nomination 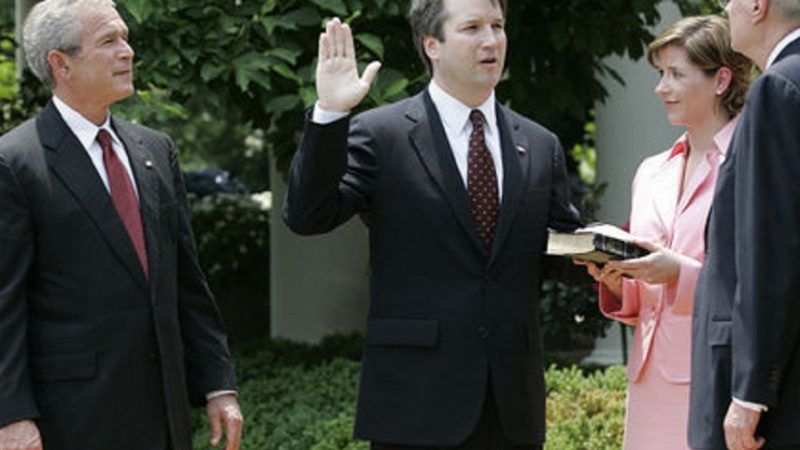 Perhaps one day a court will find that Donald Trump conspired with his personal lawyer Michael Cohen to pay nondisclosure agreements meant to silence his mistresses. Perhaps one day the House will impeach Trump for breaking those campaign finance laws, and then maybe the Senate will also remove him from office.

Those are the mechanisms that have been provided by the Constitution to thwart a president from appointing justices to the Supreme Court. I'm afraid there's no clause in the document that empowers angsty liberal pundits and politicians to question the legitimacy of duly confirmed justices.

But much like their ideal Supreme Court, Democrats have set about fabricating brand-new extraconstitutional standards that happen to always align with their partisan aims. Their latest concocted stipulation states that anyone nominated by a president under suspicion of criminality becomes "illegitimate."

Democratic Sens. Mazie Hirono and Ed Markey canceled meetings this week with prospective Supreme Court justice Brett Kavanaugh. Markey said the nominee is "illegitimate" because the president was "all but named as a co-conspirator" by Cohen when Cohen was pleading guilty to breaking a campaign finance law. A similar sentiment was repeated by many Democrats and liberal pundits. The Supreme Court itself, contends The New York Times' Paul Krugman, would become "fundamentally illegitimate" with Kavanaugh on board.

Much of this, of course, is typical Trump-era hyperbole. None of these senators was going to vote for Kavanaugh anyway, and none of these pundits is going accept the validity of a Supreme Court that adheres to the Constitution as written. Yet it's still worth noting the vacuousness of their arguments.

For one thing, Kavanaugh is not Trump. His nomination will be considered by senators, ostensibly on the merits of his career and legal positions. His nomination has nothing to do with either Trump's short-lived campaign manager Paul Manafort, whose crimes aren't even related to the 2016 election, or Cohen. Even if Trump were impeached, Kavanaugh would be the kind of judge that Mike Pence would nominate—and, for that matter, Jeb Bush or any other conservative. That is the real problem for Democrats.

Trump's nominees for SCOTUS, in fact, have been about the most traditional and predictable aspects of his presidency. And because those picks have shown a fealty to law, their nominations should be a boon for the institutions that Democrats are pretending to protect.

Then again, the idea that mere suspicion of criminality is enough to stop a president from engaging in his constitutional duty is a completely new one, designed, like most things these days, only for Trump.

The Whitewater investigation went on for six years. Did that mean that any court with Stephen Breyer, nominated after an independent investigation was launched, became "fundamentally illegitimate"? I mean, that investigation ended up convicting 15 friends and allies of the Clintons' for over 40 crimes, including felonies such as fraud, bribery, and embezzlement. Talk about a "cloud of suspicion." Clinton himself was impeached, not on campaign finance charges but on obstruction of justice and perjury. His wife was under investigation throughout most of her 2016 campaign, and not one serious person claimed that her SCOTUS nominees would be "illegitimate."

Does this standard mean that all of Richard Nixon's justices are retroactively illegitimate, as well? Or that the Clean Water Act and Clean Air Act and Environmental Protection Agency are also now illegitimate? Does it mean anyone who cops a plea with prosecutors to save himself some prison time can name a politician as a co-conspirator, ending that elected official's ability to engage in his constitutional duty?

Of course, if the Senate doesn't want to take up the Kavanaugh nomination, that's its prerogative. There is nothing in the Constitution that demands senators consider the president's choices—despite the feigned fury over Senate Majority Leader Mitch McConnell's refusal to move on the Merrick Garland vote. That, too, was a new standard Democrats concocted. There is, however, a real threat to order when a major party is convincing its constituents that our institutions—elections, courts, and so on—are no longer legitimate because it hasn't gotten its way in the political arena.

The fact is that even if special counsel Robert Mueller were to come back with a recording of Trump and Vlad Putin strategizing on how to hack the Democratic National Committee's servers, the only way to stop the president from nominating justices would be to elect people who want to impeach and remove him—not by creating a make-believe constitutional order.

The other day, liberals got a big kick out of pointing out the "irony" of Republicans at the president's West Virginia rally chanting "lock her up!" on the very same day that his former campaign manager and personal lawyer were assured prison time. I imagine that those chanting see another irony in the fact that Democrats skirt justice while Republicans are asked to play by new rules Democrats invent as they go along.