Trump Is No Match for the First Amendment

Far from undermining freedom of the press, the president's fulminations prove its durability. 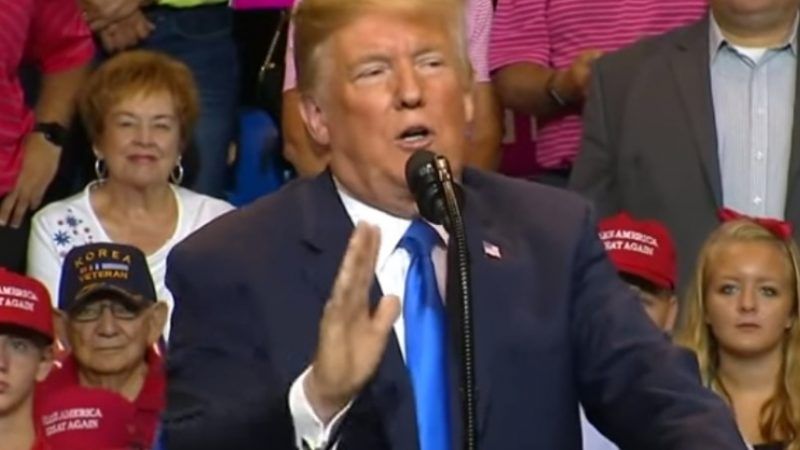 When 400 or so news outlets ran editorials chastising Donald Trump for his anti-press demagoguery last week, they made an important point about freedom of speech in America: Journalists may be mad at the president, but they are not afraid him, which is no small accomplishment in a world where reporters who offend powerful people can end up behind bars or below ground.

Americans owe their freedom of expression to the quasi-magical powers of words written more than two centuries ago. Combined with an independent judiciary, those words continue to provide robust protection for people who annoy the government.

The First Amendment is the reason Trump's recommendation that purveyors of "fake news" lose their broadcast licenses was repudiated by the man he chose to head the Federal Communications Commission. "The FCC under my leadership will stand for the First Amendment," FCC Chairman Ajit Pai declared, "and under the law the FCC does not have the authority to revoke a license of a broadcast station based on the content of a particular newscast."

The First Amendment is the reason Trump's suggestion that flag burners should be jailed or stripped of their citizenship was a non-starter. The Supreme Court, in decisions joined by Antonin Scalia, the late justice whom Trump has described as the model for his own nominees, has twice ruled that flag burning is a constitutionally protected form of expression.

The First Amendment (combined with a federalist system that puts states in charge of writing defamation standards) is the reason Trump's plan to "open up those libel laws," which he views as insufficiently protective of his reputation, went nowhere. The Supreme Court has said the Constitution requires public figures like Trump to prove "actual malice" (knowing or reckless publication of verifiably false statements) if they want to recover damages for defamation.

The First Amendment is also the reason Trump's description of "the fake news media" as "the enemy of the people," although poisonous to civil and honest debate, has not curtailed freedom of the press. To the contrary, it inspired a unanimous Senate resolution "reaffirming the vital and indispensable role the free press serves" and condemning "efforts to systematically undermine the credibility of the press."

Reporters Without Borders moved the United States down four notches in its World Press Freedom Index between 2016 and 2018, mainly because of Trump's open hostility toward the people who cover him. But far from undermining freedom of the press, the president's fulminations have proven its durability.

As a journalist, I am hard pressed to name another country where I would have more freedom to speak my mind. And I'm not just thinking about countries where critics of the government are routinely arrested or murdered.

Consider the U.K., which appears five spots above the U.S. in the 2018 World Press Freedom Index. Although freedom of expression is supposed to be protected by British common law and statute, there are several broad exceptions that would never pass constitutional muster in the United States.

This month, for instance, Mark Meechan, a Scottish YouTube personality known as Count Dankula, lost an appeal of his conviction under a British law that makes it a crime to send a "grossly offensive" message via "a public electronic communications network." In the offending video, titled "M8 Yer Dugs A Nazi," Meechan shows his girlfriend's adorable pug watching a speech by Adolf Hitler, lifting his right front paw in response to "sieg heil," and reacting with seeming enthusiasm when asked if he wants to "gas the Jews."

Whether or not you think Meechan's video is funny, the principle at stake should be clear. As the British comedian Ricky Gervais observed on Twitter, "If you don't believe in a person's right to say things that you might find 'grossly offensive', then you don't believe in Freedom of Speech."

The president of the United States does not seem to believe in freedom of speech. Luckily for us, his beliefs are irrelevant.