Dear Democrats and Republicans, Please Keep Tearing Down Your Government

Respect for the overall government is waning. Good. 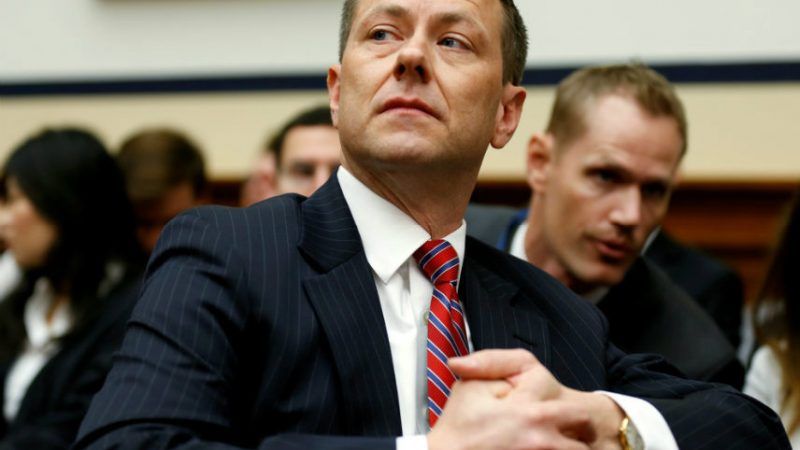 Anybody expecting respect for the overall government to survive current leadership unscathed is dreaming. And as somebody who considers government little more than a dangerous weapon in the hands of competing tribes of control freaks, all I can say is: More, please.

As I write, the GoFundMe campaign "dedicated to covering Pete's hefty–and growing–legal costs and his lost income" is well over $400,000, after initially seeking to raise $150,000 for disgraced former FBI agent Peter Strzok. That's quite a haul for a guy about whom an Inspector General's report (PDF) fretted, "we were concerned about text messages exchanged by FBI Deputy Assistant Director Peter Strzok and Lisa Page, Special Counsel to the Deputy Director, that potentially indicated or created the appearance that investigative decisions were impacted by bias or improper considerations."

After the report, Page resigned and Strzok was recommended for a demotion and a 60-day suspension. Instead, FBI Deputy Director David L. Bowdich ordered his firing amidst much Twitter-based cheerleading from President Trump. The enhanced punishment, opponents of the administration charge, was every bit as politicized as Strzok's texts.

"The firing further unravels the line between partisan politics and the Federal Bureau of Investigation's proper role as a nonpartisan criminal justice investigative arm," insists Harvard law professor Noah Feldman, who sheds no tears for Strzok himself.

It's little surprise, then, that Pew Research finds that Democrats approve of the FBI, which has been investigating the conduct of Trump and company when not sharing ill-considered text messages, while Republicans have lost their taste for the agency. Seventy-seven percent of Democrats and Democratic-leaning voters "view the agency favorably, compared with 76% early last year," a recent survey found. But "the share of Republicans and Republican-leaning independents with a positive view of the bureau has fallen 16 percentage points" from 65 percent to 49 percent.

Separately, Trump has been banging the immigration-control drums at a time when his own administration's Border Patrol data shows apprehensions of illegal immigrants along the Southwest border at their lowest in years. You have to go back to the 1970s to find fewer people scooped up trying to illegally enter the country. So why make a fuss now?

Probably because "[i]t will play well with his anti-immigrant base," as University of Arizona Professor Elizabeth Oglesby put it in April, "especially in an election year."

Immigration saber-rattling, including the separation of families by Immigration and Customs Enforcement (ICE), polls well with Trump's fans, but also provokes strong reactions from Trump opponents. That has them demanding not just policy changes and the abolition of ICE (a sensible goal with which many Reason writers agree), but also engaging in more heated responses, like doxing ICE personnel, soliciting assassination attempts, and promoting violent resistance.

It's no shocker that this, too, represents a partisan divide. "Nearly eight-in-ten conservative Republicans (77%) view ICE favorably," says Pew, while a "large majority of liberal Democrats (82%) view ICE unfavorably."

I've written before about the use of laws as partisan weapons. That's become increasingly easy in a country in which lifestyle and political preference increasingly correlate, and people have been sorting themselves accordingly.

"The separation here seeps into the micro level, down to the particular neighborhoods, schools, churches, restaurants and clubs that tend to attract one brand of partisan and repel the other," The Washington Post noted in 2016. That means laws can be used to punish political opponents by targeting their specific preferences, while leaving your own side relatively unscathed.

Agencies, too, can be used as partisan weapons, as we saw under the Obama administration when the Internal Revenue Service (IRS) was wielded as a bludgeon against conservative organizations with little consequence. Of course, the IRS has a long history of such abuse. "My father," Elliott Roosevelt said of former President Franklin Delano Roosevelt, "may have been the originator of the concept of employing the IRS as a weapon of political retribution." Now that abuse has spread to other areas of government.

But there are consequences to weaponizing law and government. "Now everyone, no matter what their political leanings, will wonder if they too are a political target by an out-of-control agency protected by the Justice Department," Investors Business Daily warned in 2015.

Just three years later, Americans support or vilify a growing number of government agencies depending on their partisan affiliations. Laws have become weapons, and agencies are seen as allies or enemies. That has serious consequences for public perception of the overall government within which those agencies operate. Just 18 percent of Americans "say they trust the federal government to do what is right just about always or most of the time," Pew polling found this year.

There's no reason to believe that trust will rise or fear decline when people rightfully assume that a government bureau or department in the hands of political opponents will be used to reward friends and punish enemies.

Those of us wary of big, intrusive government have warned for years that the mainstream political tribes, left and right, Democrat and Republican, were creating a monster. That monster, with its surveillance, arbitrary and sometimes secretive enforcement mechanisms, impersonal bureaucracy, and intolerance of scrutiny, was dangerous, we warned. It would eventually strangle us all or force us to illegal resistance.

Team Red and Team Blue seem to have taken our warnings as "how-to" advice. Now they're gleefully proving every one of our warnings correct as they turn the monster they built against one another. For those of us who cautioned that this day would come, all we can do now is sit back and enjoy the show as those who created the problem now slash away at the legitimacy of their own government.