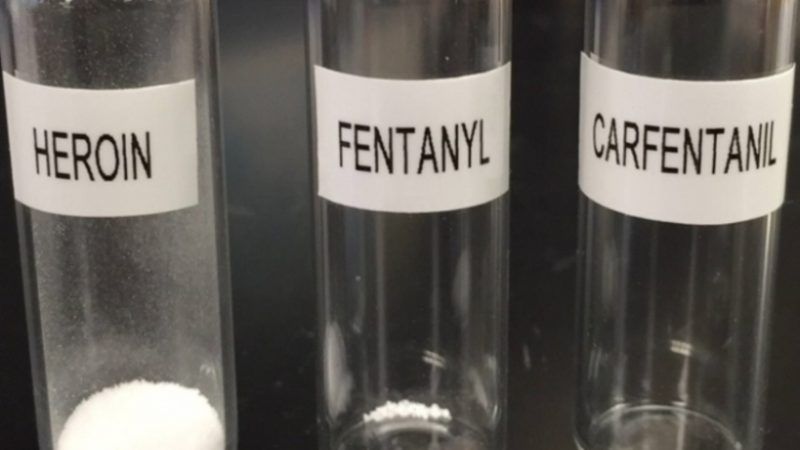 The CDC's latest estimates of opioid-related fatalities in 2017 show that the war on drugs continues to drive people toward deadlier substances. Based on preliminary estimates, the total number of deaths involving opioids (the blue line below) rose by 8.5 percent last year, from about 45,000 to about 49,000. Yet deaths involving heroin (gray line) and prescription analgesics (yellow) fell by 4 percent and 2 percent, respectively. The increase was due entirely to a 37 percent jump in deaths involving synthetic opioids other than methadone (orange), a category that nowadays consists mainly of illicit fentanyl and fentanyl analogs. That increase follows even bigger jumps of more than 70 percent in 2015 and more than 100 percent in 2016.

"The death toll reflects two major factors," writes New York Times health reporter Margot Sanger-Katz. "A growing number of Americans are using opioids, and those drugs are becoming more deadly. Experts who are closely monitoring the epidemic say the second factor most likely explains the bulk of the increased number of overdoses last year." That much seems clear, since in recent years opioid-related deaths have been rising much faster than the number of opioid users.

Between 2010 and 2016, for example, the number of heroin deaths increased roughly eight times as fast as the number of heroin users. To put it another way, heroin was eight times deadlier in 2016 than it was in 2010. The proliferation of fentanyl-fortified heroin is the most obvious explanation. The most recent numbers suggest that such mixtures have been eclipsed by "heroin" that consists entirely of fentanyl (which is much more potent than heroin) or its analogs (which are even more potent).

"Unlike heroin, which is derived from poppy plants," Sanger-Katz notes, "fentanyl can be manufactured in a laboratory, and it is often easier to transport because it is more concentrated." Not only has the crackdown on pain pills driven opioid users toward black-market substitutes that are more lethal because their potency is unpredictable, but the crackdown on heroin has pushed traffickers toward fentanyl, which is easier to make and smuggle, thereby magnifying the uncertainty that can lead to fatal dosing errors. Fentanyl analogs such as carfentanil, which is something like 5,000 times as potent as heroin, further reduce the amount that must be manufactured and smuggled for a given number of doses.

"Unexpected combinations of those drugs can overwhelm even experienced drug users," Sanger-Katz writes. "In some places, the type of synthetic drugs mixed into heroin changes often, increasing the risk for users. While the opioid epidemic was originally concentrated in rural, white populations, the death toll is becoming more widespread. The penetration of fentanyl into more heroin markets may explain recent increases in overdose deaths among older, urban black Americans; those who used heroin before the recent changes to the drug supply might be unprepared for the strength of the new mixtures."

The lethal effects of the government's anti-opioid efforts were entirely predictable and by now should be obvious to anyone who is paying attention. Which apparently does not include the legislators crafting a response. Congress is "debating a variety of bills to fight the epidemic," Sanger-Katz notes. "Many of the measures, which have passed the House but have not reached the Senate floor, are focused on reducing medical prescriptions of opioids."