The government's definition of "prompt" is a little different from everyone else's, especially when it comes to asset forfeiture. 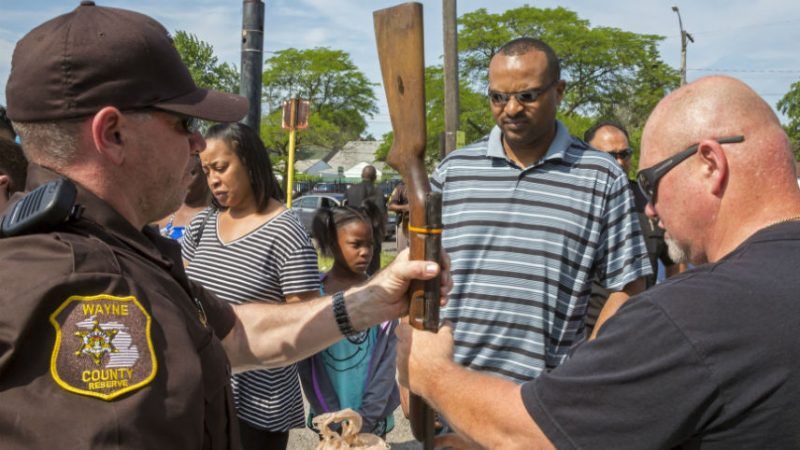 Under Michigan law, Stephen Nichols was supposed to get a "prompt" court hearing to challenge the forfeiture of his car, which police in the town of Lincoln Park seized in 2015 because he was driving it without valid insurance. It's been three years since then, and Nichols still hasn't had his day in court.

Last month Nichols and two other plaintiffs filed a federal class-action lawsuit, first reported by The Detroit News, alleging that Wayne County police and prosecutors seize residents' property and force them to wait months, sometimes years, for a hearing. The suit argues the delays violate the 14th Amendment right to due process.

In addition, Wayne County prosecutors offer to settle cases out of court for $900, leaving owners to choose between getting their vehicle back quickly, even if they believe they were innocent, or shelling out even more money for a lawyer and waiting months to get their means of transportation back.

"[Nichols] still hasn't had any hearing," Shaun Godwin, attorney for the plaintiffs says. "The law says prosecutors have to bring a case promptly, but it's just been in limbo for three years."

The two other named plaintiffs in the lawsuit, Adam and Ryan Chappell, are a father and son, respectively. According to the suit, the younger Chappell was borrowing his dad's car one day in July 2016 when Wayne County sheriff's deputies saw him pull into a medical marijuana dispensary in Detroit. The cops pulled him over as he left and seized the car. No marijuana was recovered from the car, and no criminal charges were filed in the case, according to the lawsuit.

Chappell's car was one of hundreds impounded by the Wayne County Sheriff's Office for visiting a medical marijuana dispensary.

According to state reports, Wayne County law enforcement received $473,256 in Medical Marihuana Operation and Oversight Grants in fiscal year 2016 and $483,132 in 2017.

Chappell was then handed a notice that the Wayne County Prosecutor's Office intended to forfeit his car, unless he paid a $900 out-of-court settlement fee or filed a claim to contest the seizure within 20 days, along with a $250 bond. (The bond requirement has since been eliminated by the Michigan state legislature.)

The settlement offer is standard in forfeiture cases under Operation Push-Off.

"Our common practice is to offer to the claimant three choices: 1) contest, 2) redeem, or 3) relinquish (forfeit) their interest," a spokesperson for the Wayne County Prosecutor's Office wrote in an email. "We leave the ultimate decision to the claimant. A redemption is a settlement short of going to trial since we are in the civil arena."

William Maze, a Detroit attorney who handles asset forfeiture cases, says Nichols' three-year wait for a hearing is an outlier. Most cases, he says, only take three to four months, but more problematic are the suspicionless seizures of cars made by police and out-of-court settlements offered by the prosecutor's office.

"The bigger issue with Wayne County forfeiture is—for drugs, prostitution and drag racing—they're seizing the vehicles on sometimes the flimsiest of evidence or no evidence at all, just the mere allegation that someone went to a drug house or dispensary," Maze says. "They don't find anything in the car or on the person, but they take the vehicle and offer to settle with the owner for $900. They set the number at $900 because they know it's low enough that the person can't afford to hire an attorney to fight it for that."

The Chappells decided to fight. The Wayne County Prosecutor's Office waited 72 days to file a forfeiture complaint against Chappell's car under the Michigan Controlled Substances Act. It was not until February 2017, roughly seven months later, that a judge dismissed the complaint and ordered the police to return Chappell's car.

When Chappell finally got it back, the suit says, he "discovered that the driver's side window of the vehicle had been left down, the battery was dead, the tires were flat, that damage to the exhaust and transmissions systems had been caused and marks left on the undercarriage of the vehicle consistent with the vehicle having been lifted by a fork lift."

Under civil asset forfeiture laws, police can seize property—cars, cash, even houses—suspected of being connected to criminal activity, even if the owner is not charged with or convicted of a crime.

Law enforcement groups say asset forfeiture is a vital tool to disrupt drug trafficking and other organized crime by cutting off the flow of illicit proceeds. But civil liberties groups say the lack of due process protections for property owners and the perverse profit incentive created by asset forfeiture lead police to target everyday citizens instead of cartel kingpins.

As Reason reported, nearly 1,000 people in Michigan had property seized and forfeited last year without ever being charged with a crime.

The Michigan legislature is considering a bill that would require police and prosecutors to obtain a conviction before they could seize property. The bill is similar to legislation that in recent years essentially abolished civil asset forfeiture in Nebraska and New Mexico. Most U.S. states have passed some form of asset forfeiture reform in the last five years or so based on bipartisan civil liberties concerns.

Settlement agreements like the ones in Wayne County are not unusual, but civil liberties advocates and even some state lawmakers have said they essentially amount to a shakedown. Before Albuquerque ended its asset forfeiture program, it would force owners, even innocent owners, to pay $850 to recover their cars. In Albuquerque resident Arlene Harjo's case, the city offered to return her car for $4,000 after her son was arrested for drunk driving. In Mississippi, a Reason investigation showed prosecutors would often settle with defendants, agreeing to charge them with lesser crimes in exchange for keeping their car. The IRS had a nasty habit of seizing small-business owners' bank accounts under obscure anti-money laundering laws, and then offering to drop criminal prosecution in exchange for a large chunk of the money.

The Wayne County Prosecutor's declined to comment on the lawsuit. The Wayne County Corporation County, which represents county agencies, did not immediately respond to a request for comment.