The SCOTUS nominee takes a dim view of the Fourth and Fifth Amendments. 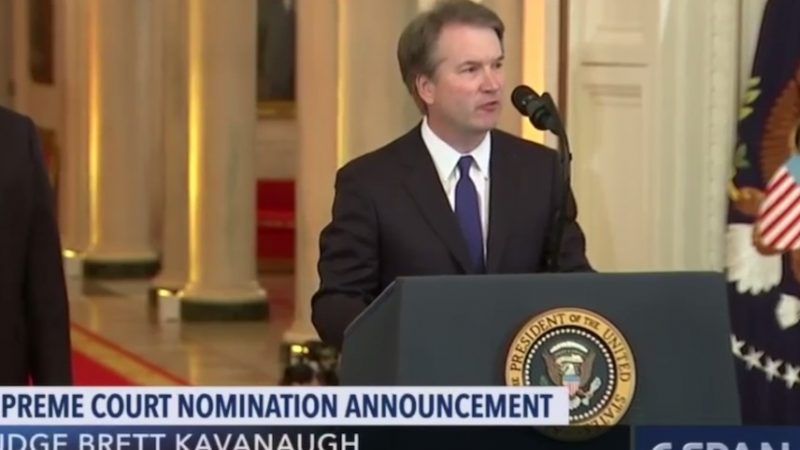 The history of liberty in America features an endless battle over the rights of individuals versus the powers of police. The Constitution was written with the intent of protecting citizens and controlling cops. But that's not quite in keeping with the preferences of Brett Kavanaugh.

Donald Trump's Supreme Court nominee made his views clear in a lecture paying tribute to the late Chief Justice William Rehnquist, delivered last year. What Rehnquist saw as one of his biggest achievements, Kavanaugh noted, was freeing law enforcement from the annoying restrictions placed on it in the 1960s and '70s. And Kavanaugh was there to second the motion.

Modern Americans take for granted that when police interrogate a suspect, they must first provide a "Miranda warning," noting his or her right to remain silent and get a lawyer. Otherwise, any confession will be thrown out of court. Most people are also familiar with the stipulation that if police conduct an illegal search, they may not use any evidence it yields.

But these simple rules didn't exist a few decades ago. Police routinely conducted searches without warrants in order to find evidence and win convictions. They also abused suspects in custody to get them to confess.

Things got better only when the Supreme Court acted to give real meaning to constitutional rights that had long been ignored. Rehnquist, however, never made peace with these decisions—and neither, apparently, has Kavanaugh.

The exclusionary rule forbids the use of evidence seized in an illegal raid. But Rehnquist thought it "was beyond the four corners of the Fourth Amendment's text and imposed tremendous costs on society," said Kavanaugh approvingly. "He believed that freeing obviously guilty violent criminals was not a proper remedy" and was not "required by the Constitution." Rehnquist had the same objection to the Miranda warning rule, which sometimes means letting a criminal go unpunished.

But the true obstacle to abusive cops is not these Supreme Court decisions. The true obstacle is the Constitution—which prohibits the government from carrying out "unreasonable searches and seizures" (the Fourth Amendment) or compelling a suspect "to be a witness against himself" (the Fifth). The remedies Rehnquist abhorred come into play only when cops have trampled on constitutional rights.

The case of Ernesto Miranda shows what happens without such rules. Police handcuffed him, took him to an interrogation room, and made him stand while they grilled him for four hours—spurning his request for a lawyer and keeping his lawyer, who had come to the station, from speaking with him.

In a crucial 1966 ruling, the Supreme Court said his treatment warranted throwing out his conviction. Rehnquist made clear that he would rather put up with such abuses than have the courts establish meaningful protections—and under him, the Court weakened those safeguards.

Another decision he didn't like involved Dollree Mapp, whose home was invaded by police, over her objection, without a search warrant and who was convicted of possessing sexually explicit material. The court overturned her conviction, establishing the rule barring evidence from unconstitutional searches.

When the court issued its decision, wrote University of Michigan law professor Yale Kamisar, several police superintendents "reacted to the adoption of the exclusionary rule as if the guarantees against unreasonable search and seizure had just been written."

The guarantees, of course, had been around since 1791. But many law enforcement agents had seen no reason to let them be a burden. If police had been scrupulously respecting those rights, the Supreme Court's requirement would not have affected them. Cops also routinely ignored the Fifth Amendment ban on forced testimony, using intimidation and physical abuse to extract confessions from both the innocent and the guilty.

The court had a choice in each instance: Devise a way to induce law enforcement agencies to abide by constitutional guarantees or let those guarantees be empty verbiage. We know which one Kavanaugh prefers.

Do these decisions sometimes benefit crooks? Yes. But as New York University law professor Stephen Schulhofer has written, the Framers understood that. The purpose of the Fourth Amendment "is to put some useful evidence out of reach and to make law enforcement more difficult," he writes. Ditto for the Fifth Amendment.

These requirements are now settled law, and police have adapted. But Kavanaugh betrays a yearning to return to the days when they didn't have to pay so much attention to the rights of those they detain. In that retro world, bad cops win. Good cops lose.