Defense attorney slams the attempt to prosecute for being part of the protest, which raised First Amendment concerns, for being a "waste of time and a waste of taxpayers' resources." 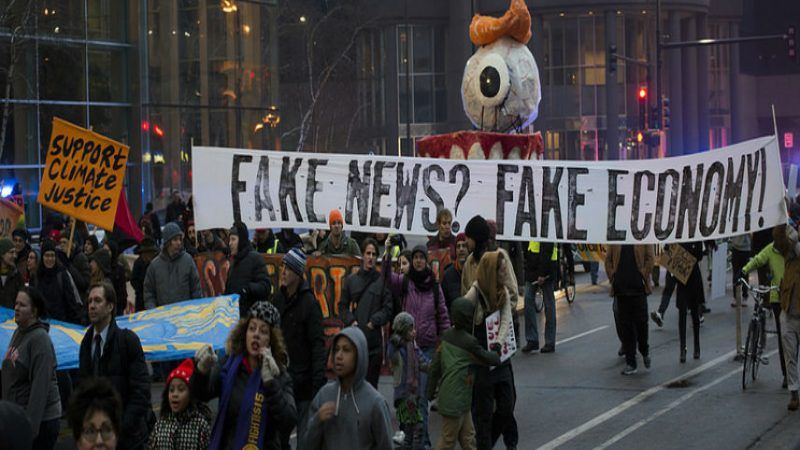 (Fibonacci Blue on Foter.com / CC BY)

Criminal charges against the 39 remaining Inauguration Day protesters still being prosecuted were all dropped today by federal prosecutors, as reported today in The Washington Post.

Originally 234 people alleged to be part of a protest called "DisruptJ20" were arrested on that day, 21 of whom later pleaded guilty.

A protest organizer, Lacy MacAuley, noted to the Post that in situations like this, justice delayed is in a real sense justice denied, since the defendants have had their lives disrupted merely waiting over a year enough under criminal charges. "How do you plan for your job and family and personal life when you are facing decades in prison?" MacAuley said.

Two sets of the arrested that day went to trial previously and were not convicted; jurors never felt the government had proven these specific people committed any specific criminal act.

Mark Goldstone, who represented two of the defendants, told the Post that the government "overreached in terms of their legal theory…that a person is responsible criminally for any destruction and violence incurred by someone in the same vicinity because of the clothes they wore — and because of that, a person is facing seven years in jail because of someone else's actions — that absolutely preposterous." The failed attempt to prosecute was then "a waste of time and a waste of taxpayers' resources."

C.J. Ciaramella reported on an earlier wave of failures to convict on what has been known as the "J20" arrests, which many found infringed on First Amendment rights of speech and assembly. Many of the arrestees, as the jurors in previous cases noted, had no provable connection to any actual property destruction that occurred during the D.C. Inauguration Day protests. The government tried to argue that merely being at the protest—that is, exercising their First Amendment rights—marked the arrested as members of a criminal conspiracy to aid the rioters. The Justice Department's investigation on these crimes including trying to access organizers' Facebook accounts and IP addresses for visitors to a protest website.

Ciaramella quoted an ACLU attorney at the time of those earlier acquittals saying the failure to convict on these arrests "reaffirms two central constitutional principles of our democracy: first, that dissent is not a crime, and second, that our justice system does not permit guilt by association."