Why the Hell Isn't Larry Sharpe Being Polled in New York?

At least one-quarter of New Yorkers would tell you that they won't vote Democrat or Republican, if only pollsters would ask them. 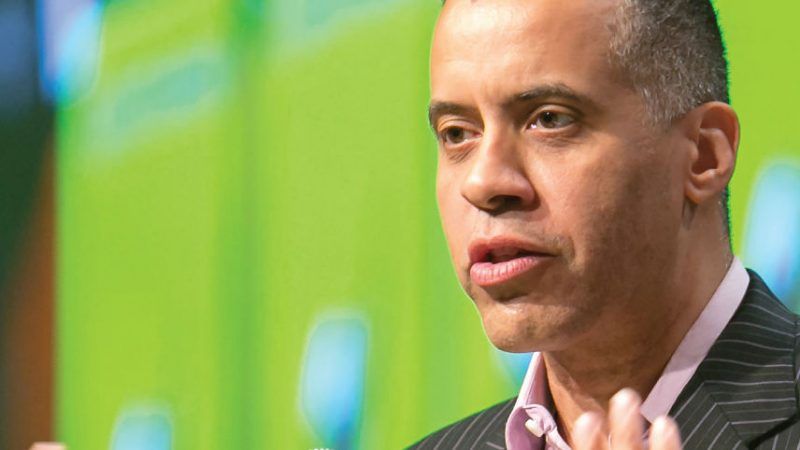 New York politics, you may have heard, can be passionate and unpredictable. Democratic Socialists topple senior House incumbents, TV personalities escalator into and out of our lives, and a kind of low-level pressure of resentment constantly builds in the vicinity of the unloved machine politicians who reliably misgovern the place. At a time when Trumpism and the resistance to it are rubbing emotions raw, this mix of a frustrated populace and an entrenched political class is inherently volatile, as Rep. Joe Crowley (D–N.Y.) can certainly testify.

So why the hell aren't third-party candidates being polled for New York governor?

Former Sex in the City co-star Cynthia Nixon, for example, is running an in-your-face, headline-generating progressive challenge to incumbent Democratic Gov. Andrew Cuomo. Nixon is currently gathering petitions to compete in the Sept. 13 Democratic primary, but is already guaranteed a spot on the November general election ballot due to her nomination in mid-April by the Working Families Party (New York has six minor parties with automatic ballot access; the Libertarian Party is on track to gather the necessary signatures to get Larry Sharpe on there as well).

And yet when Siena College Research Institute conducted a general-election gubernatorial poll June 4-7, the choices were: Republican, Democrat, "wouldn't vote," "someone else," and "don't know/no opinion." Nixon's name only appeared as a Democratic alternative to Cuomo, and neither Sharpe nor Green Party nominee Howie Hawkins—who received 4.8 percent of the vote in 2014—were anywhere to be found. With the exception of gauging the comparative strengths of Cuomo and Nixon as Democratic nominees, how is this even a remotely useful poll?

Quinnipiac at least included Nixon as a third-party candidate in an April 26-May 1 survey—in which she pulled a close third place with 20 percent, behind GOP nominee Marc Molinaro's 23 percent, and Cuomo's 40 (this compares to a 57-26 percent split when it's just Cuomo vs. Molinaro). But even there, no Hawkins, and nothing about Sharpe, who was the second-biggest fundraiser in the race as of January 2018, and is a rising star in the country's third-largest political party capable of generating Politico headlines like "A New York rarity: A serious Libertarian candidate."

What happens when you put all five leading candidates in the same poll? Sharpe commissioned Gravis Marketing to find out June 4-7, and the polling firm came up with this:

This is no doubt a smaller overall number than the energetic Sharpe would like to see, though there are reasons for optimism in the cross-tabs. But even with the caveat that third-party candidates historically get oversold in pre-election polls (a factor you can and should adjust for), the important thing here is that Sharpe, Nixon, and Hawkins—and possibly former Syracuse mayor Stephanie Miner, a decently powerful Democrat who just threw her hat in the ring as an independent—should be in any poll that claims to tell us something useful about the New York gubernatorial race. With three serious left-of-center contenders going after an unlovable legacy Democrat, this race in a heavily blue state could get weird in a hurry.

As FiveThirtyEight number-cruncher Nate Silver said in the spring of 2016 about listing Libertarian presidential nominee Gary Johnson in polls, "Some pollsters don't like to include third-party candidates because, for a variety of reasons, polls sometimes overstate their numbers. But it's not a pollster's job, in my view, to take that choice away from the voter when they'll have it on the ballot. They can always ask the question both ways, too—with Johnson and without." (FiveThirtyEight's final forecast for Johnson was 4.8 percent; he ended up with 3.3.)

Over at Newsgrowl, Steve Goodale recently asked polling companies why they weren't including Sharpe and Hawkins. The results were pretty interesting.

Siena College Research Institute spokesperson Steven Greenberg gave Goodale a particularly unsatisfying answer: "We only did head-to-head, Democrat vs. Republican, matchups as the rest of the ballot is still in flux." This despite Hawkins and Nixon already being on the ballot, and the near-certainty that Sharpe will get there.

Greenberg did send us a copy of a poll from the 2014 race that included Hawkins, and pointed out that, "not atypical for a minor party candidate in pre-election polling—he polled at nearly twice what he wound up receiving at the ballot box."

Again, per Nate Silver, the traditional third-party fade is not a sufficient reason to ignore that many voters will in fact vote for smaller-party candidates. Gravis has a combined 24.3 percent going to non-traditional candidates even without including Stephanie Miner. Chop those results by a third and you still have a sizable chunk of the electorate. By not including candidates who stand to have measurable impact, "pollsters are putting their thumb on the scale," FiveThirtyEight's Harry Enten has argued. It's free and misleading publicity for the front-runners.

Marist, which has yet field a general-election poll, told Goodale that the general custom is to "include ballot status candidates," a category that won't kick in for Sharpe until he collects enough signatures. But even then: "In instances when we poll with a media partner, candidate inclusion is determined at the discretion of the media partner." As Goodale notes:

In practice, their media partners tend to prefer sticking with just Democrats and Republicans.

For example, in this March 2014 Marist Poll of the New York gubernatorial general election only Democrats and Republicans are mentioned. This is despite the fact that in March 2014 the Green Party had guaranteed ballot access for the general election. At the time of this poll, Hawkins had been a declared candidate for two months, and was a shoo-in for the official nomination at the party convention in May.

But Marist had media partners (NBC 4 New York and the Wall Street Journal) and was forced (presumably kicking and screaming) to drop any mention of Hawkins by name from the poll. Respondents were not even given an option for "other"—the only choices were Democrat Andrew Cuomo, several possible Republican candidates (Rob Astorino, Carl Paladino, or Donald Trump—yes, that's right), or undecided.

Anthony Fisher wrote about the media-partner dodge in June 2016. I ranted a bit that cycle about the distorting effects of not including Gary Johnson and even Evan McMullin. And Nick Gillespie recently sat down with Larry Sharpe: