Rustem Kazazi was victimized by desperadoes from a gang called "Customs and Border Patrol," but thanks to the Institute for Justice he's fighting back. 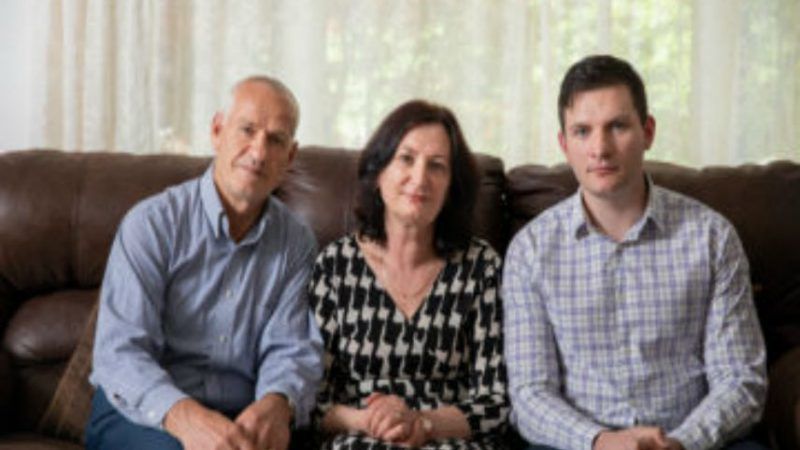 Rustem Kazazi, an American citizen, was just trying to get on a plane to return to his native Albania last October, from Cleveland Hopkins International Airport. He was initially flying to Newark where he'd catch a connection to Albania.

He hoped while in Albania for a few months to do some repair work on a home he still owned there, and possibly to look for another home for his family in his old age. Given facts about the Albanian banking and finance system and the advantages of cash there, he chose to turn his life savings into U.S. dollars and bring them with him to cover expenses related to the above house needs and his long stay rather than deal with bank transfers or anything of the sort.

At an American airport, he was the victim of desperadoes who took everything he had.

Kazazi ran his carry-on luggage through the x-ray machine, like we all must. In that luggage was his life savings in cash, $58,100. There was zero attempt to be clandestine or smuggle-y about it. It was divided into three labeled and marked stacks of $100 bills, all in one envelope with $58,100 written on the outside.

TSA agents noticed the money. Hard not to, I guess. They called Customs and Border Patrol (CBP) on Kazazi, who took him off to a private room to grill him, as well as strip him naked for a search for, what? money he did not label openly in his carry-on luggage?

While his English is poor and he couldn't quite understand the agents, they refused him either an interpreter or to summon family for help.

They kept his money, without telling him why, then tried to get him to just get on his flight without it. The receipt they handed him made no reference to the specific amount they'd confiscated. When he refused initially to just go on with his day as if he hadn't just suffered a horrible crime, they escorted him out of the airport. He contacted his wife in shock and she assured him it must all be some mistake and encouraged him to go forward with his travel plans.

In December CBP finally formally informed him via a "Notice of Seizure" that they'd taken $57,330 from him, $770 less than he insists was actually taken. The Kazazis filed all the officially required forms and notices to proceed with trying to get their money back before the legal deadline (after some complications involving confusing deadlines provided by CBP, and including the $770 the CBP seemed to deny it had even stolen). CBP agents tried to finagle the Kazazis into withdrawing their demand for federal court action, but failed.

Kazazi and his family today filed a formal motion for return of property under Rule 41(G) against U.S. Customs and Border Patrol and some of its authorities and agents hoping to get his stolen life savings back. The motion was filed with the assistance of consistent civil-forfeiture-justice fighters from the Institute for Justice, and the preceding details were gleaned from it.

The money is hard-earned. Kazazi, now 64 years old, and his family had the (at the time apparent) good fortune to win a visa to enter the U.S. from the State Department in 2005, and has been a citizen since 2010. His wife Lejla has lately been teaching English to immigrants, while Kazazi has worked a series of jobs including busboy, custodian, and parking lot attendant. (He'd been a police officer in Albania himself.)

Customs has chosen to assert that Kazazi's money is criminal for a grab bag of reasons that don't necessarily go together and for which they have no proof: "involved in a smuggling/drug trafficking/money laundering operation" or you know, something bad that means they can steal it.

Was Mr. Kazazi guilty of smuggling, drug trafficking, or money laundering? Money can't commit a crime by itself, one might think, but requires a human accomplice. Lacking any evidence whatever for any such crime on Kazazi's part, he's accused or convicted of none of them. Thanks to the sinister legal magic of "civil asset forfeiture," the feds can just steal the money without proving any crime at all on the owners part.

Except even that evil power, which shouldn't exist at all, has its procedural limits thanks to the Civil Asset Forfeiture Reform Act of 2000, as Kazazi's lawyers argue. According to that law, Customs in order to keep the stolen loot must officially initiate either civil forfeiture or criminal proceedings within 90 days of the complainant demanding an official federal court procedure regarding the property. That deadline, the motion says, expired back in April, but CBP haven't returned the money. The feds should have no legal recourse but to do that, promptly. But they haven't, hence the motion filed today.

The Washington Post reported on Kazazi's plight today, and received a statement from CBP asserting

"pursuant to an administrative search of Mr. Kazazi and his bags, TSA agents discovered artfully concealed U.S. currency. Mr. Kazazi provided inconsistent statements regarding the currency, had no verifiable source of income and possessed evidence of structuring activity," that is, making cash withdrawals of less than $10,000 to avoid reporting requirements.

[Wesley] Hottot [one of Kazazi's lawyers] denies that Rustem Kazazi was trying to conceal the cash — he had wrapped it in paper, labeled it and sent it through the scanner in his carry-on bag. The "inconsistent statements" were a result of Kazazi's poor English language comprehension, Hottot said.

Hottot also noted that the structuring allegation was not included in the seizure notice. "They've never mentioned structuring before," he said. "I think what were really seeing here is some creative Monday-morning quarterbacking by CBP, trying to justify the unjustified."

As IJ noted in a press release on Kazazi's plight, despite the government's invented and contradictory claims of criminality:

the Kazazis saved up their money from jobs they held lawfully in America, and they have 13 years of tax documents and bank statements to prove it. Moreover, the government has never pointed to any evidence of wrongdoing.

"This family's case, like so many others, shows why civil forfeiture must end," explained IJ attorney Johanna Talcott. "The Kazazis did nothing wrong and were never charged with a crime, but the government still won't return their money all these months later. This kind of abuse is far too common because civil forfeiture is an inherently abusive process that will always have disastrous effects on innocent people. Enough is enough."

CBP also nattered about laws requiring international travelers with sums greater than $10,000 to report them. Kazazi, his lawyers told the Post, knew about those laws and intended to file his legally required forms prior to getting on the Newark flight in which he actually would be leaving the U.S.

He never got the chance. Let's hope the courts do the right, and legal, thing, demand CBP obey the law and return the stolen money, and give Kazazi a chance to obey the laws regarding disclosure of funds leaving the country by letting him leave the country with his funds.