With or Without Legalization, Sports Betting is Here to Stay 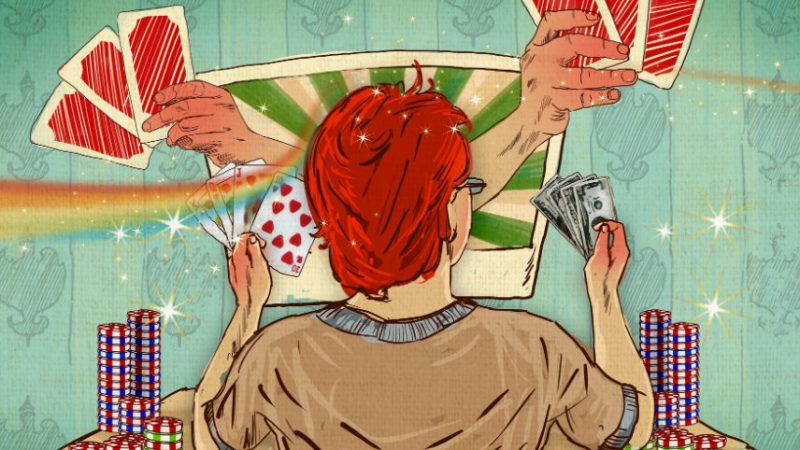 The U.S. Supreme Court has ruled that a federal law forcing most states to ban sports betting is unconstitutional. The decision didn't, strictly speaking, legalize sports betting—it just got the federal government out of the states' various ways so they could decide policy on their own terms.

It's still not clear that they'll get to do that, given that Lord High Scold Orrin Hatch, in his role as a senator from Utah and co-author of the legislation that was just kneecapped, plans to introduce a new bill intended to "to help protect honesty and principle in the athletic arena" and, not incidentally, choke off sports-related games of chance.

While it should go without saying, I'll say it anyway: that's a stupid idea. The federal law and related state and local statutes have never eradicated the thrills and risks of games of chance; they've only made them illegal, and driven a thriving industry and its customers underground.

In the ruling, Justice Samuel Alito wrote for the majority: "As the Tenth Amendment confirms, all legislative power not conferred on Congress by the Constitution is reserved for the States. Absent from the list of conferred powers is the power to issue direct orders to the governments of the States." And the Professional and Amateur Sports Protections Act (PASPA) of 1992's "provision prohibiting state authorization of sports gambling schemes violates the anticommandeering rule."

That's a sound win for the Constitution and for state autonomy, if not quite for individual rights. The ultimate legality of sports gambling now rests on the hands of state legislators who may or may not have more respect for freedom of choice and the simple reality of the world around them than their federal counterparts. Whatever they decide, though, gambling will continue with or without official approval, just as it has for…well…forever.

My grandfather, Salvatore "Chips" Tuccille was a professional gambler, as my father detailed in his memoir, Heretic. One of my father's earliest memories was of the paddy wagon passing by on East Tremont Avenue in the Bronx, and his "father, petty gambler and carouser now known throughout the neighborhood as Chips, staring bug-eyed at neighborhood gawkers through the iron bars in back…The cops had raided the waterfront and hauled in Chips and his fellow riffraff, hustlers and suckers alike."

But neither that bust nor another really deterred him; his biggest scores came later, on the troop ships to and from Europe during World War II. And my grandfather was no outlier, as illegal gambling goes.

PASPA "restricts all but a handful of states from legalizing sports gambling," Eric Meer wrote in 2011 in the UNLV Gaming Law Journal. "This has allowed a thriving shadow economy of mob-associated bookies and offshore websites to operate with virtual impunity." Meer documents the history of federal efforts to restrict gambling, concluding that "Congress can try to prohibit or discourage sports gambling, but underground bookmakers will continue to serve the public's demand."

Just how popular is sports gambling, even with Orrin Hatch and his buddies putting on their frowny faces at every mention of the activity? "Estimates of the scope of illegal sports betting in the United States range anywhere from $80 billion to $380 billion annually," concluded a 1999 report commissioned by Congress, "making sports betting the most widespread and popular form of gambling in America."

Yeah, that was almost 20 years ago, before widespread broadband Internet provided easy access to off-shore operations. I wouldn't bet on the industry having shrunk since then.

March Madness alone accounts for about $12.5 billion annually in illegal betting, Bloomberg guesstimated in 2015. But Jay L. Zagorsky, an economist at Ohio State University, sniffs at such figures. He thinks the total illegal sports betting industry "only" accounts for about $67 billion in business every year.

On occasion, the U.S. has flexed its muscles against gambling operations based overseas, such as with the 2006 arrest of the unfortunate David Carruthers, CEO of BetonSports, while he was changing planes in Dallas during a flight between London and Costa Rica. Carruthers was arrested in transit because the U.S. had no jurisdiction over him where he and his company were based and operating perfectly legally under different laws than the sort favored by Hatch.

That the arrest was more for public-relations purposes than for actual effect is clear from Meer's subsequent paper documenting PASPA's failure and from the Bloomberg and Zagorsky estimates of the money changing hands in defiance of the law. Perhaps such grandstanding deterred a few aboveboard companies from offering betting services online to American customers, but that left the industry open to the upscale heirs of the likes of my grandfather.

"A more direct affront to state sovereignty is not easy to imagine," Justice Alito continued his scathing critique of PASPA on his way to driving a judicial spike through its heart. He could have added, though it wasn't his writ to do so, that it was an equal blow to the right of individuals to make their own choices, and to sheer common sense, since a long history tells us that banning markets for popular goods and services just drives them underground.

"Hopefully, Congress or the federal courts will recognize that PASPA (1) has failed to accomplish what it set out to do, (2) continues to support a thriving shadow economy of mob-associated bookies and offshore websites, (3) unfairly restricts the sovereignty and economic freedom of the states, and (4) makes detecting possible athlete and referee bribery more difficult," Meer concluded in his 2011 article. "PASPA is a bad bet that is no longer worth gambling on."

Honestly, PASPA was always a sucker's bet. Unfortunately, politicians represent a ready supply of suckers for just such legislative scams.