Trump Talks a Good Game to the NRA. His Policies Tell a Different Story.

When it comes to the Second Amendment, the president is all talk. 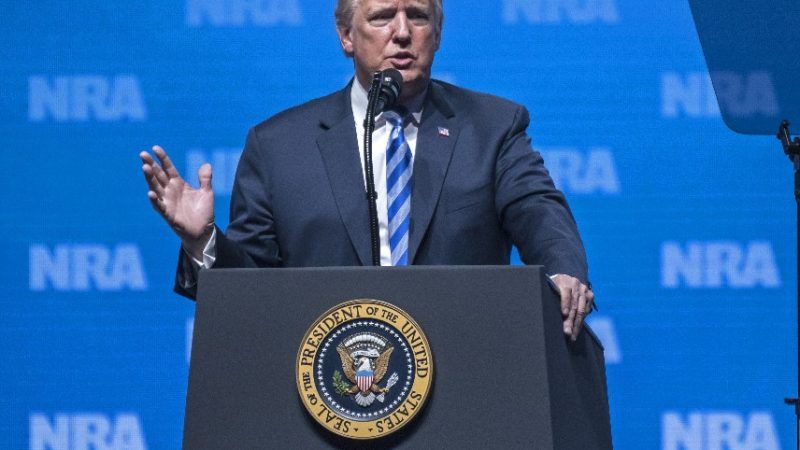 President Donald Trump called on his audience at a National Rifle Association convention today to get out and vote in the November election, warning that "your Second Amendment rights are under siege."

He's right on that point. Anti-gun types, habitually Democrats, have become bolder than any time in recent memory when proposing everything from mandatory confiscation of certain types of rifles to the outright repeal of the Second Amendment. In states like California, it seems like new anti-gun laws are being proposed with a frequency and enthusiasm previously reserved only for tax increases and Tesla subsidies.

But what Trump didn't mention is that his own administration is doing its part to whittle away at Americans' Second Amendment rights. With the exception of Trump's judicial appointments—they appear to typically be sound on gun rights—this is, sadly, not a White House that has proven itself to be a reliable champion of American gun owners.

It's true that the president has, as recently as today, broadly endorsed the right to self defense. The "people in this hall have never taken our freedom for granted," Trump told the NRA audience in Dallas, saying they recognized the "sacred rights given to us by God including the right to self-defense."

Trump added that in London, guns are so restricted that knives have emerged as the deadly weapon of choice. And he referenced recent attacks on pedestrians by vehicle-driving killers. By the logic of anti-gun campaigners, he said, "we are going to have to outlaw immediately all van and trucks, which are now the new form of death for maniac terrorists," before concluding with a promise to "always protect your Second Amendment."

Alas, the laws and regulations that have extruded themselves from Washington, D.C., over the last year fall short of this lofty rhetoric. (At times, so have Trump's own remarks.)

There was the Republican embrace of the so-called Fix NICS Act, dealing with background checks, despite Gun Owners of America pointing out that the federal database in question "contains the names of 257,000 law-abiding veterans who have lost their constitutional rights." Fix NICS ended up glued onto a must-pass spending bill—rarely a recipe for sober policymaking—that Trump signed into law in March despite complaining that "nobody read it" and the final draft was "only hours old."

Then there was the unilateral decision by Trump in February to ban "bump stock" devices by executive fiat. That was despite his criticisms of his predecessor for doing just that, despite the Obama administration concluding they were legal, and despite the lack of clear statutory authority to do anything about them. That should be left to Congress. But, as Reason's Jacob Sullum wrote, Trump felt the need to "do something" about gun violence without alienating the NRA.

On the positive side, Congress and the Trump administration did nix a bad anti-gun rule coughed up by the Social Security Administration under President Obama. The rule had raised enough questions about due process that even the ACLU, a group not known for its affection for the Second Amendment, opposed it. (See Reason's February 2017 article by Brian Doherty.)

The more pressing issue for tens of millions of gun owners remains the lack of a broad federal preemption law. Such a law could protect Americans' constitutional right to carry firearms, to purchase the semi-automatic rifles of their choice (especially ones that may be painted black), and to buy ammunition and standard capacity magazines.

Federal preemption would not create new rights. It would instead recognize and underline Americans' rights to self-defense that already exist—and properly understood, existed long before the Bill of Rights was drafted.

Today, Americans face the no-win choice between jail time or having a firearm to defend their lives and those of their families. Time after time, we see news reports of Americans arrested and prosecuted in states like New Jersey, New York, and California for even unknowing violations of gun bans.

Passing strong carry reciprocity statutes to protect and advance this right is perhaps the most important next step in restoring the Second Amendment to its proper place among its peers in the Bill of Rights. Indeed, the right to bear arms does not stop at any state border, city, or county line.

But Trump has not championed reciprocity. Nor did he mention it today. That silence measures the distance between pro-gun political rhetoric and actual pro-gun policies.