We restrict trade to punish our enemies. Why would we do the same to ourselves?

Katherine Mangu-Ward | From the June 2018 issue 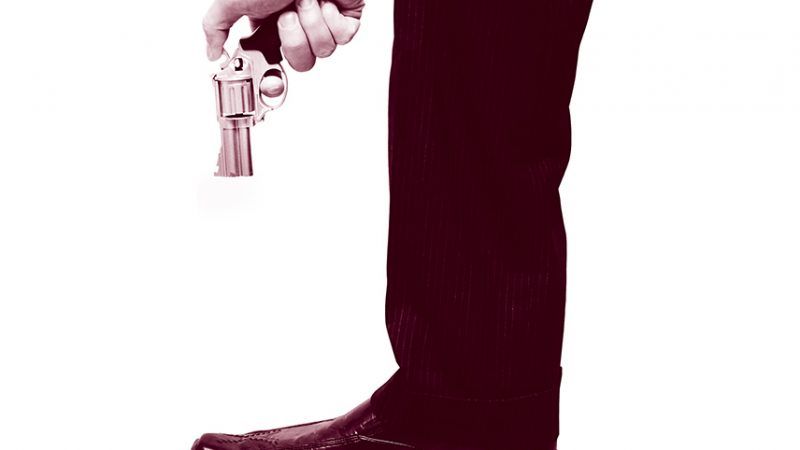 Sometimes, when the leaders of a foreign country do something very naughty, the other nations of the world get together and punish them. Assuming bombing isn't on the menu, a popular way to administer a political spanking is to dramatically curtail the export of certain goods to the troublemakers. The thinking is that if you want your enemies to suffer, you should deny them the incredible gains in productivity and prosperity made possible by comparative advantage and division of labor operating on the global scale.

In other words, the penalty for behavior beyond the political pale—such as the development of a new nuclear arsenal, the use of chemical weapons, genocide, or widespread nationalization of industry—is to be cut off from trade. Slowing or eliminating the flow of cheap foreign raw materials, manufacturing equipment, and finished goods makes it harder and more expensive for a country's domestic industries to function.

In Cuba, for example, the U.S. sought for decades to inspire homegrown rebellion against pro-Soviet Communism by artificially imposing a shortage of basic supplies and creature comforts. The same is true in Iran, where the U.S., along with other nations, has imposed various sanctions since the revolution in 1979—alternately holding out the possible future lifting of those restrictions as a carrot in negotiations over the country's nuclear program, and wielding tougher injunctions as a stick. In Venezuela, when a belligerent authoritarian socialist took power, the world moved swiftly to limit commercial intercourse with that nation.

This strategy goes all the way back to Thomas Jefferson, who presided over the Embargo of 1807, which prohibited U.S. ships from trading in foreign ports in an effort to punish the British and French for their bad habit of grabbing Americans off civilian vessels and impressing them into Europe's understaffed wartime navies.

How odd, then, that protectionists seek to create the same conditions at home—artificial scarcity or elevated prices for certain imported goods—as a way to stimulate the domestic economy and punish our economic enemies. President Donald Trump and his anti-trade allies in the administration and on Capitol Hill are using the very same weapon they have been brandishing at Iran and Cuba to shoot ourselves in the foot when it comes to China.

Trump kicked off our current trade war in early 2018 by imposing tariffs on washing machines and solar panels. While the sanctions were aimed at China, they wound up hitting other suppliers of those products as well—along with U.S. consumers.

In March, Trump announced massive new tariffs on foreign steel and aluminum. Though the sanctions were initially intended to apply across the board, the president's rhetoric made clear the target was Beijing. The choice of steel and aluminum allowed the administration a flimsy national security justification as cover for its actions—America needs tanks, after all, and cheap Chinese steel might out-compete American industry to the point that our ability to manufacture war materiel could be fatally undermined!—and consequently a defense for why the move wasn't processed through the World Trade Organization (WTO).

The WTO, already pushed to the brink by constant Chinese flouting of the rules, may well have sustained a mortal blow when America's tariffs were announced. Trump's decision prompted a flurry of direct lobbying by other countries for exemptions—obtained, at least temporarily, by Canada and Mexico, with hints of others to come—rather than calls for the international body to arbitrate, as it has done in past conflicts over trade rules. The WTO is a deeply flawed body, but a decline in its influence is not likely to increase the flows of goods across borders—a major engine of wealth creation in the decades since its creation.

"We're on the verge of a painful and stupid trade war, and that's bad," Sen. Ben Sasse (R–Neb.) said in a statement following the announcement. He was right. China responded to the steel and aluminum tariffs with taxes of their own on American soybeans, chemicals, and tech. That, in turn, prompted the Trump administration to release a list of 1,300 additional Chinese products that would be subject to increased levies—an eclectic grab bag that included everything from textiles to human blood, from pasta-making machinery to grenade launchers.

As Reason columnist Veronique de Rugy pointed out in The New York Times in April, Beijing does routinely violate trade agreements—by subsidizing steel production, for example. "It's true that those subsidies artificially lower the price of steel imported by America and might hurt some American steel mills and workers," she wrote. "But this effect is the same as it would be if Chinese steel makers had a genuine efficiency advantage over our producers." In either case, cheaper steel is a boon to everyone other than the rival steel producers.

"When you're already $500 billion down, you can't lose!" the president has tweeted. But the $375 billion goods deficit with China—which forms a major part of America's $800 billion overall trade deficit—is not a sign that something is wrong. It's simply an indication that imports currently offer a combination of price and quality that Americans prefer.

The theory, of course, is that if Americans discover foreign goods have become more expensive, they will switch to those items' now-cheaper domestically produced counterparts, supporting homegrown industry. In fact, prices go up across the board (since, in the absence of price competition from abroad, American manufacturers have no incentive not to keep their prices high), and American consumers are forced to settle for fewer or lower quality versions of basic household goods.

Another argument offered by supporters of trade sanctions is that they will reduce our economic dependence on Chinese holders of U.S. public debt. And the fact that Americans buy goods made abroad with U.S. dollars does enable foreigners to buy American Treasury bonds and the like. At the beginning of 2018, China held $1.17 trillion, or about 11 percent of the total. (By contrast, nearly 60 percent was held by Americans.) But the fact that China has U.S dollars is not to blame for the national debt—that sin rests firmly with America's government, which spends more money than it takes in.

Quite often, of course, economic sanctions backfire when used as an instrument of foreign policy, causing the targeted country's restive populace to blame oppressive outsiders for their economic woes, rather than their own government's intransigence. This has arguably been the case in Cuba, Iran, and Venezuela at different points in time. Even Jefferson ultimately backed off of his embargo when it resulted in a lot of deprivation for American consumers, a loss of lucrative foreign trade routes for American merchants, and not much trouble at all for his European bugaboos.

But when it comes to self-imposed trade restrictions, that backlash is a feature, not a bug: It's Beijing's fault, the logic goes, that the U.S. has been forced to heavily tax imports. If only the Chinese would play fair, this wouldn't be necessary. Yet that thinking is just as backward as blaming America for the failings of Venezuelan socialism or Iranian theocracy.

Next year, when your washing machine starts making a weird kathump kathump sound on the spin cycle and you find yourself balking at the cost of a replacement, don't blame China. Blame Trump.