The Deep-State Liars of the #Resistance 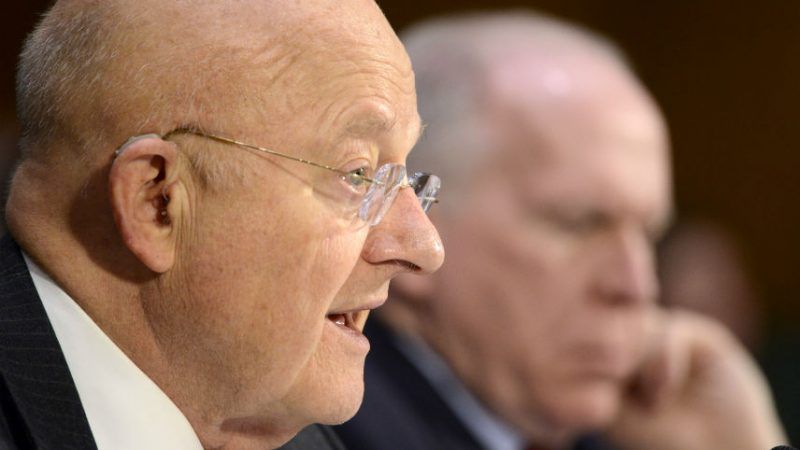 During his half-century spent defending Americans' civil liberties, here's what has changed, according to lawyer Alan Dershowitz: "Now conservatives have become civil libertarians, and liberals have become strong supporters of law enforcement, the Justice Department and the FBI," the professor and pundit said after dining with President Trump on Tuesday night.

That snorting sound you hear? That's a thousand libertarians shooting coffee through their noses at the notion that the GOP is newly sympathetic to issues of law enforcement overreach and intrusive investigative tools. Republicans had an opportunity as recently as three months ago to rein in warrantless snooping under the Foreign Intelligence Surveillance Act. What did they do? They voted overwhelmingly to reauthorize the practice for another six years: 191-45 among GOP members in the House, 43-7 in the Senate.

It's unfortunate how wrong Dershowitz is about the Republican Party. But what's also depressing is that he may be right about the Democrats. In their efforts to oust a potentially lawless president, they are exalting a rogue's gallery of surveillance-state officials who have abused their power.

Take James Clapper. The man who oversaw a vast surveillance apparatus as director of national intelligence under President Obama is now the toast of left-leaning media outlets including Salon, the Guardian and the Huffington Post for questioning Trump's "fitness to be in office," saying that Watergate "pales" in comparison to the current crisis, and quipping that Russian President Vladimir Putin treats Trump "like an asset."

California Democrat Rep. Adam B. Schiff tweeted his Clapper endorsement last year: "James Clapper is a patriot who served his country for 50 years & knows dangerous bluster when he sees it. So yes, he's an authority on DJT." But as Schiff certainly knows through his work on the House intelligence committee, Clapper straight-up lied to Congress and the American people in March 2013 when asked by Sen. Ron Wyden (D-Ore.) whether the National Security Agency collects "any type of data at all" on millions of Americans. "No sir. Not wittingly," Clapper replied.

Three months later, after the revelations of phone logs and email data collected by the NSA made front pages, Clapper characterized his lame answer as the "least untruthful" way he felt he could respond. If Trump and his B-movie gang of hangers-on are eventually to be tripped up on a series of lying and obstruction-style charges, surely there are better character witnesses for the prosecution than a perjurer.

It's difficult these days to get the latest #resistance news without encountering some of Clapper's partners in government malfeasance. One of MSNBC's latest contributor hires, for example, is former Obama-administration CIA Director John Brennan. Like former FBI director James B. Comey (coming soon to a bookstore near you!) Brennan is one of the more melodramatic voices on Twitter, delivering stern lectures to a presidential interloper who dares impugn our noble intelligence state.

"When the full extent of your venality, moral turpitude, and political corruption becomes known," Brennan tweeted at Trump last month in a characteristic effort, "you will take your rightful place as a disgraced demagogue in the dustbin of history. You may scapegoat Andy McCabe, but you will not destroy America. … America will triumph over you."

(McCabe, the FBI deputy director who got fired the day before his planned retirement, raised a quarter-million dollars for a legal defense fund within six hours, helped out by retweets from the likes of MSNBC host Rachel Maddow.)

Brennan's moral compass has not always been so prominently displayed. During his tenure as CIA director, the agency got caught spying on the Senate Intelligence Committee's computers. When confronted by then-Chairwoman Dianne Feinstein (D-Calif.) about it, Brennan used the same how-dare-they tone he now reserves for the president: "Nothing could be further from the truth," he said at first. "We wouldn't do that. I mean, that's just beyond the scope of reason."

By uncritically cheering on such flawed actors, the Trump opposition is sending a clear if unwitting message to future abusers of power: To rehabilitate your image, simply oppose the president with enough flowery adjectives. I predict we will hear more such performances — complete with applause from progressives — during the upcoming book tours of Comey and former CIA Director Michael Hayden.

To the extent that these former officials have direct knowledge of matters relevant to the Trump/Russia investigation — and Comey, at least, certainly does — we need to hear from them. But if in these fraught political times we're taking our moral cues from a gang of former intelligence officials, then our problems run deeper than — and will outlast — the current resident of 1600 Pennsylvania Ave.