Handing Out Pamphlets Is Not a Crime

A Michigan jury tampering case strikes at the heart of the First Amendment. 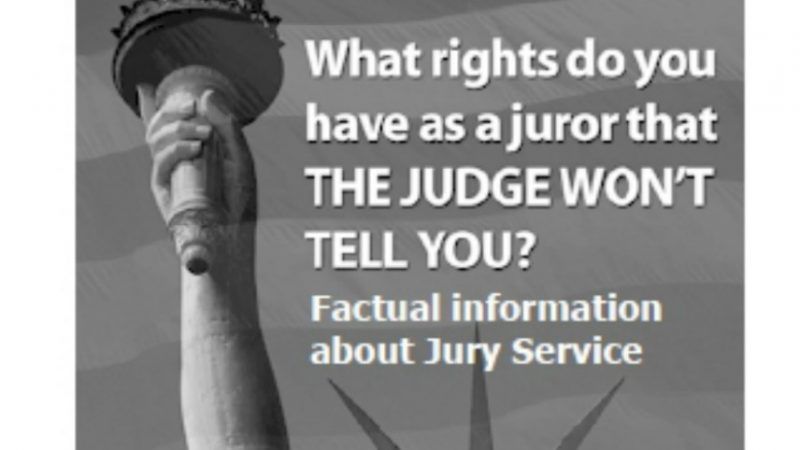 Brian Thiede, the prosecuting attorney for Mecosta County, Michigan, wants to put Keith Wood in jail for handing out pamphlets. Yet Thiede says the pamphlets are perfectly legal, and so is handing them out.

The solution to this riddle lies in Thiede's interpretation of Michigan's jury tampering statute, which he says turns constitutionally protected speech into a crime. If the Michigan Court of Appeals agrees, it will be giving officials like Thiede a versatile tool to censor and punish people who offend them.

The pamphlet at the center of this case, which Wood obtained from the Fully Informed Jury Association (FIJA) and distributed in front of the Mecosta County Courthouse on November 24, 2015, argues that jurors can and should judge the law as well as the facts, which may lead them to acquit a technically guilty defendant in the interest of justice. That principle, known as jury nullification, is venerable but controversial, especially among judges and prosecutors.

The FIJA pamphlet "just says ignore the law, ignore the facts, do what your conscience wants," Thiede declared at a preliminary hearing. "I'm thinking, 'Oh my goodness, we could have the jury who thinks that jihad is righteous, and if the San Bernardino shooters had not been killed, they'd say, 'Let's acquit.'"

Thiede believes FIJA is advocating lawlessness. "The jury's violation of their oath is illegal, even though we don't have a remedy for it," he said while opposing Wood's motion to dismiss. "The pamphlet was set up to instruct and encourage the jury to go in one direction and one direction only—to favor the defendant." Arguing against Wood's appeal, Thiede likewise complains that "the content of the pamphlet was clearly anti-government."

Wood concedes he took an interest in Yoder's case and knew it was scheduled for trial that day. But he says he expected the case to end with a plea bargain (which it did) and picked that day because he thought the courthouse would be busy.

Wood was convicted of violating a state law that says "a person who willfully attempts to influence the decision of a juror in any case by argument or persuasion, other than as part of the proceedings in open court in the trial of the case, is guilty of a misdemeanor." Yet Wood did not discuss the Yoder trial with anyone at the courthouse, and none of the people who received a FIJA pamphlet from him was a juror in that case or any other, since no jurors were selected that day and Yoder ended up pleading guilty.

"Wood was charged with tampering with a jury that did not exist," says his attorney, David Kallman. "There is no such crime in Michigan."

The Cato Institute, in a brief it filed last week on Wood's behalf, argues that his conviction "strikes at the core of the First Amendment." It notes that he was "convicted for engaging in classic political advocacy (peacefully distributing pamphlets) in the quintessential public forum (the sidewalk in front of a courthouse) on a matter of public concern more ancient than Magna Carta, and at the heart of Anglo-Saxon law (the rights, duties, and independence of citizen jurors)."

If the jury tampering law is understood to cover Wood's leafleting, the American Civil Liberties Union of Michigan warns in another brief filed last week, "it would criminalize a vast amount of protected speech." That might include, for example, holding rallies or passing out literature in support of tort reform, women's rights, or drug decriminalization, depending on whether those causes were arguably related to a pending case.

Thiede, in other words, may be inadvertently strengthening the case for jury nullification.