Rand Paul Reads the Omnibus Spending Bill (Because Someone Has To) 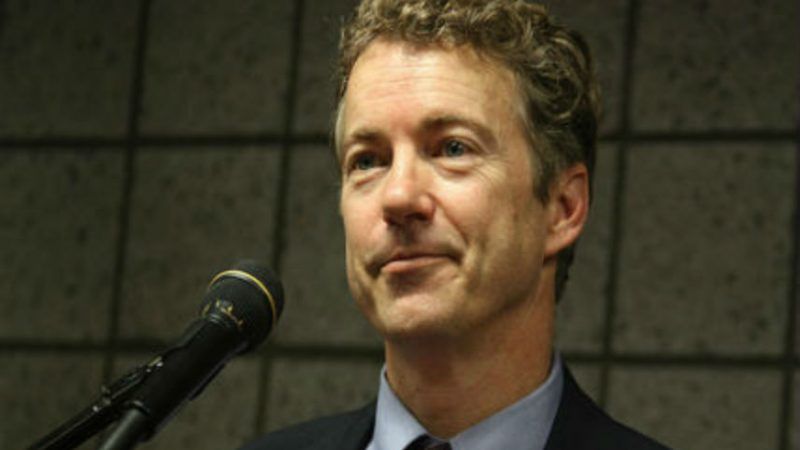 Sen. Rand Paul (R-Ky.), who might be thinking of holding up the Senate's vote on the insane and mysterious omnibus spending bill, is publicly conducting some basic due diligence for a legislator: demonstrating that, unlike pretty much all his colleagues in House or Senate, he's actually trying to read the monstrous thing before voting. (Paul notes it took over two hours for his office printer to even print the thing.)

He's giving the American people some insights, good and bad, in real time via his twitter feed.

I found a kernel of hope: "no funds in this act will be used to support or justify torture."

no funds will be spent to prevent any state's medical marijuana initiatives.

Some things Paul wonders if require this level of public (i.e. you and me) funding:

Here are a few more highlights:

And more of that:

on page 355. NSA prohibited from targeting US persons with FISA 702 program.

sounds good —but — privacy advocates fear that NSA still does back-door targeting of US persons.

Courageous Senator Wyden has asked how many US persons caught up in supposedly foreign data base.

Paul wonders about the integrity of the often-ignored War Powers Act:

Page 348 of terrible, rotten, no-good budget busting bill, a nugget that I wish we obeyed

sec. 8103: none of the funds may be used in contravention of the War Powers Act

And sheds light on our foreign policy apparatus' weird definition of "permanent":

eyes getting tired but really someone should read this beast.

Page 392 sec 9007: no $ shall be spent "for the permanent stationing of US forces in Afghanistan"

Wonder what they meant by permanent? Some might argue that after 16 years we approaching the definition of permanent.

Insight into how revenue no matter how high never seems to make overall debt shrink:

Page 430 of "crumni-bus:" Good news. The government is going to "earn" $350 million by selling oil from Strategic Petroleum Reserve.

Bad news is the $ won't go to reduce the $21 trillion debt. The $ will be instead be spent elsewhere by the Federal government.

Paul is continuing to put himself through this hell for the American people in real time on his twitter feed.