Live Debate 3/19 in NYC: Is There a Rape Culture on College Campuses?

On Monday, March 19 in New York, Cathy Young and Michael Kimmel will debate whether campuses are unsafe for women. Buy tickets today or watch live! 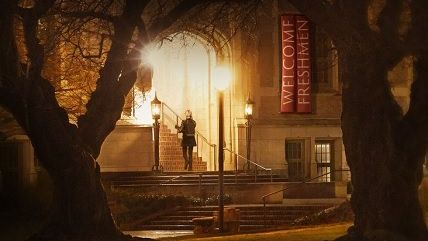 "There is a rape culture on college campuses that creates an unsafe environment for female students."

That's the resolution that will be debated at the next Reason-Soho Forum debate, which takes place in New York City on Monday, March 19.

Co-founded and moderated by Gene Epstein, the Soho Forum is "a monthly debate series that features topics of special interest to libertarians, and the series aims to enhance social and professional ties within the NYC libertarian community."

Reason is proud to partner with the Soho Forum, to livestream each debate as it happens, and to publish the debates both as videos and as episodes of the Reason Podcast; go here for our archive.

The Soho Forum is an Oxford-style debate, which means that the audience votes before and after the proceedings. The participant who moves the most people to his or her side is declared the winner.

Details on the event:

Michael Kimmel is the SUNY Distinguished Professor of Sociology and Gender Studies at Stony Brook University. Among his many books are Manhood in America; Angry White Men; The Politics of Manhood; The Gendered Society; and the best seller, Guyland: The Perilous World Where Boys Become Men. With funding from the MacArthur Foundation, he founded the Center for the Study of Men and Masculinities at Stony Brook in 2013.

Cathy Young is a contributing editor at Reason magazine, a weekly columnist at Newsday, and a regular contributor to the Jewish Daily Forward and The Weekly Standard. She's the author of two books: Growing Up in Moscow: Memories of a Soviet Girlhood (1989) and Ceasefire: Why Women and Men Must Join Forces to Achieve True Equality (1999). A frequent speaker on college campuses, Young has also been a regular participant in the "Battle of Ideas," a unique annual weekend-long event in London that brings together speakers of diverse perspectives for dozens of panels on various issues.

Tickets cost between $10 and $18 and must be purchased in advance.

The most recent Reason-Soho Forum debate asked whether sex-offender registries should be abolished.

More info on that here.