Your Right to Free Speech, Like My Right to Self-Defense, Isn't Open to Debate

Rallying to call for restrictive laws is a whole lot easier than getting people to submit to them. 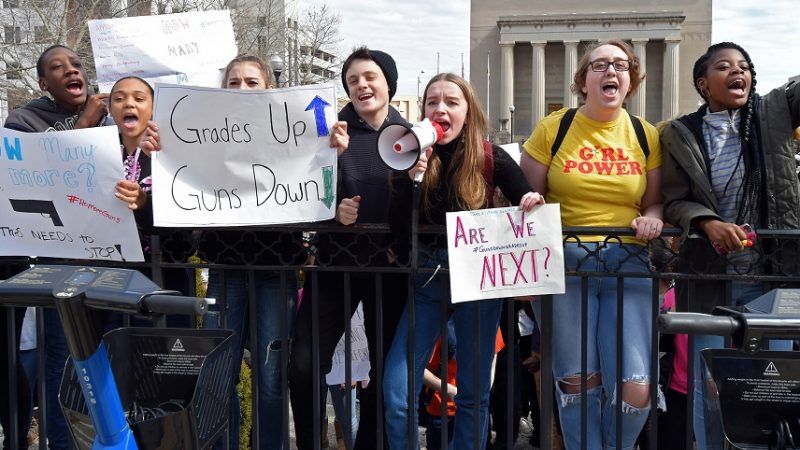 Today, some students, teachers, and other Americans who share their views are walking out of classes across the country to call for limits on the right of free assembly. Wait, strike that. They're walking out of classes to call for further restrictions on protections against unreasonable search and seizure. Nope, that's not it either. Wait, I have it: they're protesting for greater regulation of self-defense rights. Yup, there we go.

Of course, they're exercising their free speech rights in the process, and that's as it should be (although at least some of the kids have been conscripted into exercising somebody else's free speech rights by school officials who expect that their charges will adhere to officially endorsed positions). After all, the exercise of individual rights shouldn't be subject to popular opinion or debate.

Why shouldn't the exercise of individual rights be subject to popular opinion or debate? Well, that's a philosophical question. From my perspective, as well as that of many libertarians and classical liberals, individuals are sovereign beings free to do as they please so long as they don't cause each other actual harm. To the limited extent that government has any legitimacy, it can act only to prevent people from injuring one another—"the only purpose for which power can be rightfully exercised over any member of a civilised community, against his will, is to prevent harm to others," as John Stuart Mill put it. The potential for injuring one another in the exercise of our liberty isn't enough to justify government action since that's inherent in just being alive and the having the ability to contemplate mischief.

That's not to say that everybody is bound to share my concept of what makes government legitimate or illegitimate. But these are the principles that guide me and other people who roughly share my point of view. We really don't consider our rights open to discussion. We don't consider anybody's rights open to discussion—not even when they're exercising some rights to call for limiting others.

Where this lands us is that even if today's protesters get their way and legislators vote to impose restrictions on gun ownership and self-defense, that doesn't mean that those of us who value those rights will change our conduct. Statutes aren't like the law of gravity—we get to choose whether we're going to abide by them, or else actively oppose them and sabotage their enforcement. The laws will mostly be obeyed by people who agree with them and disobeyed by people who are either specifically committed to self-defense rights or who more broadly believe that their liberty isn't open to challenge. I've argued elsewhere, only slightly jokingly, that tighter gun laws will leave libertarians better-armed than everybody else—because we're not very likely to pay them much attention.

The track record on disobeying such laws is very clear. Residents of Connecticut and New York defied requirements that they register their so-called "assault weapons." Gun owners in Colorado ignored mandates that they pass all their person-to-person sales through the background check system. Even the French and Germans flip the bird to laws that gun-haters can only dream of imposing in the United States, owning millions of illegal firearms that supporters of restrictions wish they didn't have.

Exercising your liberty in total contradiction to restrictive laws is a good thing, by the way. Nothing limits the power of the state like the outer boundaries of people's willingness to do what they're told. Even the military recognizes this, instructing officers not to give orders that won't be obeyed. People's unwillingness to submit is what made Prohibition fail, and it's what hobbled the similar ban on marijuana. Even taxes are dependent on people's willingness to pay, since there's always the option to work and do business off the books. "[T]he level of tax is one of the major drivers of shadow economic activity," Philip Booth of the Institute of Economic Affairs wrote in 2013. "If governments keep tax rates low, the shadow economy is likely to be smaller."

Not that every tax dodger, dope-smoker, and moonshine-sipper is explicitly referencing John Stuart Mill's harm principle when they scoff at government actions they find intrusive and oppressive. Most folks aren't especially interested in philosophy. But the constituents of political systems everywhere seem to instinctively place limits on what they're willing to tolerate from the powers-that-be. That's how we end up with surveys reporting that, even among people who are supposedly thrilled to be taxed to the hilt, "80 percent of all Danes interviewed for the 2010 study either had or would have engaged in the black market economy," and the World Health Organization found that "[t]he United States leads the world in rates of experimenting with marijuana and cocaine despite strict drug laws." That last datum is a big part of the reason marijuana laws are loosening, as the country gives up on restrictions that many Americans defy.

I don't begrudge today's protesters their right to voice their opinions, even as they call for restrictions on my own rights. Their rights to free speech and free assembly are, after all, among the rights that aren't subject to popular opinion or debate. I even wish them good weather and a pleasant experience.

But they need to be aware that, just as I would never try to impose limits on their liberty, I and people like me will never submit to the restrictions that they demand.

Enjoy the exercise of your rights.