Rand Paul: 'A Tariff Is Simply a Tax'

Senator tells Reason "most of the businesses in Kentucky are quite worried about a trade war." But will a weak Congress confront Trump? 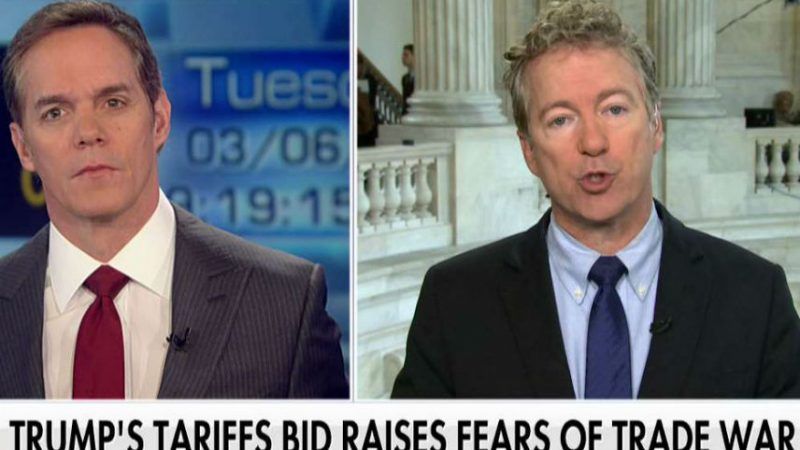 President Donald Trump's impetuous move last week to announce a steel and aluminum tariff has provoked stronger-than-usual opposition from Capitol Hill Republicans. But will they—and can they—do anything about it?

I put that question today to the most reliably libertarian-leaning member of the United States Senate, Kentucky's Rand Paul, at the end of an interview about his latest attempt to get a floor vote on auditing the Federal Reserve (on which stay tuned to this space). Here's what Paul said:

"Well, I think it's important to remind everybody that a tariff is simply a tax, and that the people who pay it are American consumers. And so in a time when we just have been sort of slapping ourselves on the back at having passed over a trillion-dollar tax cut—that's the right direction, you know, returning people's money to themselves back to its rightful owners—but I think it's going the wrong direction to put taxes on consumers for buying imported goods, and really in the end probably will hurt more Americans than it actually will help.

"I think for every 60 businesses that purchase steel there's one business that makes steel in America, so there's really a lot of people who are going to suffer from rising prices for steel, aluminum, etc. Just in Kentucky we export 20 billion dollars worth of goods and services, including agriculture, every year, and I can tell you that most of the businesses in Kentucky are quite worried about a trade war."

Paul, a longtime critic of congressional abdication on everything from declaring war to passing budgets, is appropriately pessimistic about his colleagues being able to prevent Trump from having his allegedly winnable trade war.

"[F]rom previous Congresses, the trade deals give the president too much power to reverse the deals," he said. "So this is true of almost every single thing we do—any time we pass things we're afraid to actually set it in stone, so we give the president so many waivers to get out of all kinds of international agreements.

"And so he probably has the power, and we have to take that power away….We'll see. If the results of this were bad enough, I think Congress could act; the other possibility is that if the results are bad from this maybe Trump reverses direction."

Stay tuned for more from Paul on auditing the Fed. In the meantime, the latest from John Stossel: