After the Gun Ban

Looking back a few years after hypothetical new restrictions on semiautomatic weapons in private hands, we see a country grown more divided, but no less armed. 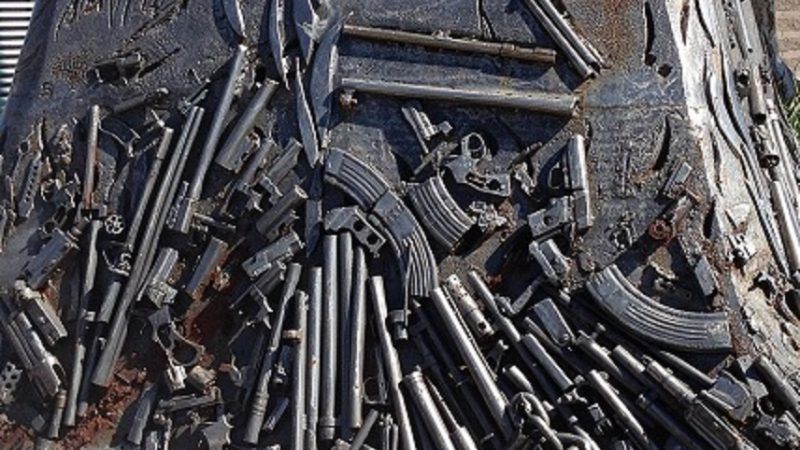 Can Americans overcome hurdles to changing this country's gun culture and the laws regulating firearms? There may be a path to accomplishing just that—but it's unlikely that anybody would like the results. Let's look back from a possible future…

The strategy that gun controllers finally settled on was to shift the culture to make firearms ownership socially unacceptable. Then, legal changes would be possible.

"I think we have to cleanse our culture of this false idea that guns are cool," gun opponents wrote. "Guns are not cool. Cool kids don't use guns." Others agreed, and they all pointed to an earlier example of demonizing a previously popular product. "Guns should be the new cigarettes," they insisted.

Perhaps sounding a bit of a cautionary note, cigarette smoking was actually on the rise among college students who rolled their eyes at the gross old TV ads. One risk of cultural programming is that people may change the channel. But the plan to shift the culture was adopted, and it worked—sort of.

That's "sort of" because, while anti-gun messages were a big hit with some media platforms, they were immediately countered by vigorous counter-efforts through opposing channels by pro-gun groups. That was something that never happened during the battles over tobacco. American culture—and media, with it–was far more fragmented than it had been in the days of unchallenged anti-smoking ads.

So the anti-gun message found an audience among those who were already predisposed to listen. These were people whose politics were generally left of center, and who followed media outlets to match. The result was declining gun ownership among those who were already wary of the practice. Before the anti-gun campaign, researchers found that "44% of Republicans and independents who lean to the Republican Party say they own a gun, only 20% of Democrats and Democratic leaners say the same," but now the number of left-leaning gun owners started to fall even further.

Pollsters who had found that many gun "owners associate the right to own guns with their own personal sense of freedom" were unsurprised to see them openly stockpiling weapons and ammunition in response to the cultural battle. It quickly became clear that the partisan arms gap was growing in a politically fragmented country. Conservatives and, especially, libertarians (who almost universally valued liberty over laws that threatened that liberty) owned weapons at far higher rates, and increasing, than their opponents

But the cultural onslaught, ably assisted by the stumbling GOP and its internal civil war, had enough impact at the margins to affect elections. Democrats seized the White House and majorities in both houses of Congress and promised major changes to come—including on guns.

Warned by experts that yet another "assault weapons" ban made no sense because "as a matter of functionality, these guns are just like other rifles. They're more powerful than some handguns and rifles, and less powerful than others," they decided to go a step further. Encouraged by Supreme Court turnover and the resulting opportunity to redefine the Second Amendment out of existence, Congress banned all semiautomatic firearms in private hands, with compensation promised in return.

Many lawmakers later admitted that they never realized that semiautomatics made up maybe half of the 310 million guns estimated by the Congressional Research Service to be in private hands as of 2009. Just as important, they'd never understood that, outside of a very few jurisdictions with some sort of registration on the books, the government really didn't know who owned what guns. Even in those jurisdictions, compliance had been spotty—15 percent compliance with assault weapon registration in Connecticut, and 5 percent in New York. Many owners had openly refused to abide by registration laws out of fear of precisely what had come to pass: compensated confiscation.

A few million guns were surrendered, and victory weakly proclaimed—to much cheering in some media circles, and jeering elsewhere in the fractured country. The largely unplanned-for cost of compensating the owners of those few million guns sparked a new round of jeers. The surrendered guns came overwhelmingly from the jurisdictions with registration, and from people sympathetic to the law.

Congress summoned its energy one more time and passed ammunition restrictions. From now on, you could only purchase ammunition for weapons registered in your name.

Gun sales surged again, now for bolt- and lever-action rifles chambered in rounds traditionally used in semiautomatic rifles, and revolvers that similarly accepted traditionally semiautomatic calibers. It escaped nobody's notice that ammunition purchased for a legal weapon could also be used in guns that never made it to the registration lists.

Enjoying similar surges in popularity were ammunition reloading supplies, purchased by people who wanted to stay entirely clear of registration lists. A new generation of 3D printers and CNC machines also saw booming sales as enthusiasts flocked to arsenal-in-a-box solutions that let them manufacture almost anything they wanted at home. The simplest CNC machines converted 50 percent lowers into finished firearm receivers—that was down from 80 percent, but likely to go no further after engineers scolded legislators that they were coming close to criminalizing blocks of metal.

Enforcement of the new laws proved to be exceedingly uneven, with many state and local law enforcement agencies—especially those serving gun-friendly constituencies—explicitly opting out. "It is well established that the federal government cannot force state officials to implement federal laws," legal experts reminded angry gun control advocates. That left the most enthusiastic enforcement in areas where support for the law and compliance was already strongest.

New restrictions on semiautomatic firearms had been driven by concerns over mass shootings, but it remained almost impossible to tell if the law had any effect on crime. The U.S. remained average to above-average in the frequency and impact of what had always been unusual crimes. "Though rampage shootings are rare in occurrence, the disproportionate amount of coverage they receive in the media leads the public to believe that they occur at a much more regular frequency than they do," scholars noted before the law changed. Such incidents remained rare—and frustratingly horrifying—after the new laws passed. Few actual experts had held out much hope anyway. As one gun skeptic commented after researching various proposed policies, "the case for the policies I'd lobbied for crumbled when I examined the evidence… I can't endorse policies whose only selling point is that gun owners hate them."

What increased in frequency, though, were confrontations between law-enforcement officers seeking to enforce the new laws and citizens on the receiving end of raids. Like earlier drug-enforcement efforts, the new gun laws were implemented with violent, no-knock raids–especially in minority communities that had relatively little political clout with which to resist. Grisly headlines spoke of the death of innocent people killed when police hit the wrong address, and of officers killed when targets shot back. Juries in some areas showed a growing tendency to give defendants a pass when they'd broken the locally unpopular laws—and even when they fired on police. Local law enforcement became even more inclined to let the feds enforce their own laws—if they were up to the job.

With guns now a more explicitly partisan issue than ever, left-of-center media have taken to painting gun-friendly areas as practically in a state of insurrection. Opposing gun-friendly media return the favor by encouraging resistance to what are seen as police state tactics and by sharing tips on doing just that.

An especially troubling development is that political violence appears to be on the rise in a country where the seams are beyond frayed and where members of opposing political factions "despise each other, and to a degree that political scientists and pollsters say has gotten significantly worse over the last 50 years." A line appears to have been crossed in the minds of many Americans, and what were opponents are now enemies.

New elections loom, but nobody expects them to resolve much of anything.