The attorney general does not seem to understand how the drive to minimize opioid use hurts innocent people. 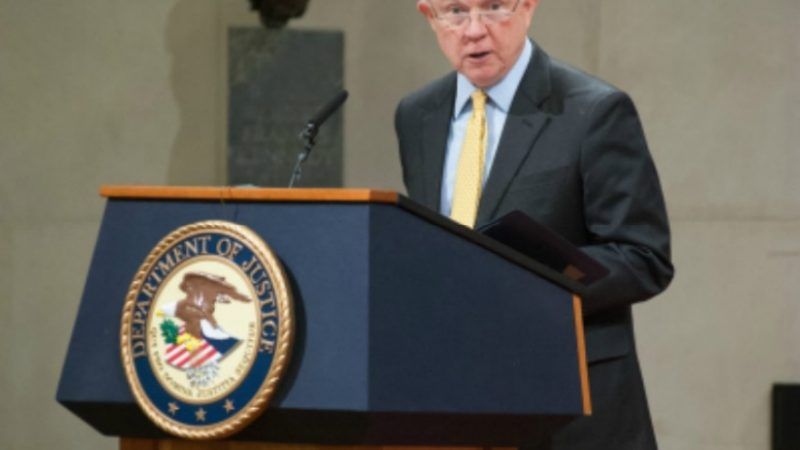 When Attorney General Jeff Sessions advised people in pain to "take some aspirin" and "tough it out" during a speech in Tampa last week, the federal prosecutors in his audience laughed. Mitzie Katzen, who has suffered from complex regional pain syndrome since she was a teenager, had a different reaction.

"I was just floored," Katzen says. "I could not believe what I was reading, and I thought that has to be somebody who has never experienced really severe pain for any length of time." Katzen's perspective on Sessions' remarks illuminates the depravity of a policy that sacrifices the interests of patients like her in the name of fighting the "opioid epidemic."

Saying "this country prescribes too many opioids," Sessions cited the stoic example set by White House Chief of Staff John Kelly, a former Marine general who refused to take pain medication while recovering from hand surgery. Although "it did hurt," Sessions said, "you can get through these things."

It's not clear why people would choose to suffer postsurgical pain that could be easily relieved by an opioid analgesic, especially since the risks associated with medical use of such drugs are minimal. A large study reported last month in The BMJ found that just 1 percent of people who took prescription analgesics after surgery showed signs of "opioid misuse." The risk of a fatal overdose among people who take opioids for pain is even lower—something like 0.02 percent annually, judging from 2015 study reported in the journal Pain Medicine.

The attorney general's medical advice is not just senseless but cruel, especially if it is applied to chronic pain patients like Katzen. A 55-year-old mother of three who lives in Fort Worth, Texas, Katzen began experiencing nerve pain after a bout of Rocky Mountain spotted fever when she was 15. The pain became disabling after she caught mononucleosis while working as a child life specialist at a hospital in New Mexico, spreading from her torso to her legs, knees, feet, and face.

Katzen currently takes methadone and oxycodone, occasionally supplemented by injections of Demerol (meperidine) when the pain gets really bad. "Without medication, I really can't function," she says. "It's hard to move my arms. It's hard to walk."

Katzen knows that because a doctor who disapproved of the drugs she was taking once cut her dosage in half, leaving her essentially bedridden. That is the sort of indignity that an indiscriminate drive to reduce opioid use inflicts on people with severe chronic pain, who are often treated like drug-seeking criminals instead of patients.

Thanks to an arbitrary cap that took effect at the beginning of this year, Katzen's insurer is now covering just a fraction of the pain medication she takes. She worries that regulatory pressure will discourage doctors like hers from prescribing opioids, that "they'll decide it's just too great a risk."

That fear is well-founded. "There are many pain clinics flooded with patients who have been treated previously by their primary care physician," says Jianguo Cheng, president-elect of the American Academy of Pain Medicine. He says these refugees include patients who "have been functional" and "responding well" to opioids for "many years." Some have been driven to suicide.

If Sessions talked to people like her, Katzen says, maybe he could "see what it looks like to live with pain all the time." Then he might understand how the conviction that "this country prescribes too many opioids" can lead to policies that hurt innocent people.

"I'm very afraid of what's happening in our country," Katzen says. "I'm concerned that I will not have a functional life any longer if I'm not allowed to have what treats my pain."