Silk Road's Founder Is in Jail for Life, but the Dark Web Only Grows 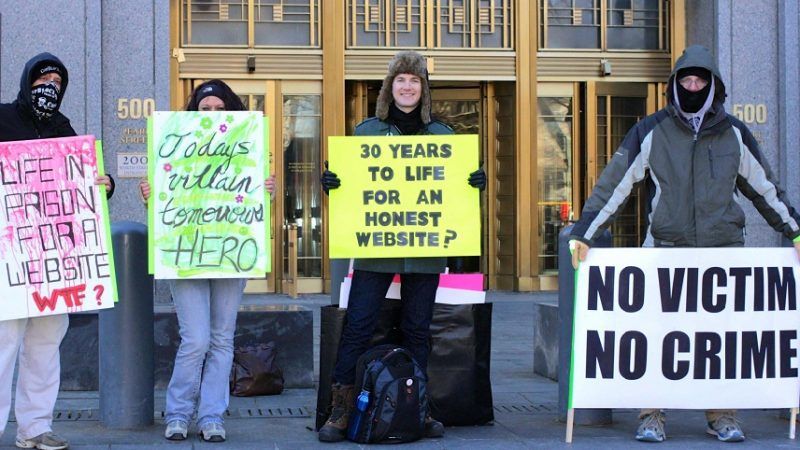 Then he became a libertarian, and he decided, "I want to use economic theory as a means to abolish the use of coercion."

He viewed laws against drugs as coercion—government force that stops people from living the way they want.

Because Silk Road didn't use dollars, it was also private, said Ulbricht. "The State is unable to get its thieving murderous mitts on it."

But he was wrong. Ulbricht slipped up, using his real name in an internet forum, and the FBI found him and jailed him.

A jury, looking at his former website, convicted him of things like "conspiracy to traffic narcotics." He was clearly guilty of that.

But then Judge Katherine Forrest said that because "Silk Road was a black market of unprecedented scope" she would sentence Ulbricht to "double life plus 40 years, without parole."

That's a longer sentence than many murderers get.

"We all agree here," he told his TV panel. "Life in prison without parole! Any other wiseguys want to do it, that's what you are gonna get."

Give me a break. Locking some people up forever will not stop sales of drugs.

Americans should have learned that from our last attempt—Prohibition.

Making popular things illegal rarely diminishes their use. People still buy the banned items, but now they buy them from criminals. Violence increases. Sellers, instead of resolving disputes in courts, settle them with violence.

What we saw during alcohol prohibition, we now see in the drug market.

What did government accomplish by closing Silk Road? Nothing lasting. Other illegal sites opened. Today, they offer more contraband than Silk Road ever did. Silk Road had 12,000 listings. Now several sites carry more than 100,000 listings.

"So I guess they weren't scared by Ross's life sentence, as the judge said," says his mother, sarcastically.

But law enforcement still brags about brief successes. "The dark net is not a place to hide!" crowed Attorney General Jeff Sessions after one bust. "We will use every tool we have to stop criminals from exploiting vulnerable people."

"Our critics will say we shutter one site, another site emerges, and they may be right," says Andrew McCabe, who recently stepped down as Deputy Director of the FBI. "But that is the nature of criminal work. It never goes away."

But the criminality would go away if we just legalized drugs. Today, there are no shootouts over alcohol sales.

"Silk Road had some rules at least, like nothing that harmed or defrauded," says Ulbricht's mother. "No child pornography was allowed."

Also, the drugs were high quality. The FBI made more than 100 purchases from Silk Road and concluded that the drugs had "high purity levels."

Still, I find it hard to sympathize with Ulbricht because police also have charged him with hiring a hit man to kill someone.

Ross's mom believes that threat was faked, possibly by law enforcement agents themselves.

No one was actually killed, and the government didn't charge Ulbricht with murder-for-hire in the trial that jailed him for life.

A typical sentence for murder-for-hire when no murder occurs is about 10 years. But Ulbricht got much more than that. Was the sentence for damage Ulbricht allegedly did, or because the State resents its inability to control this sort of online trade?

"He was a libertarian," says his mother. "Believed in free markets and volunteerism. He's not a dangerous person."

No American is safer because Ross Ulbricht is in jail for life. He is just one more casualty of our futile war against drugs.