Rep. Thomas Massie explains why he will vote "hell no" on renewal of FISA if Congress doesn't reform the 702 program. 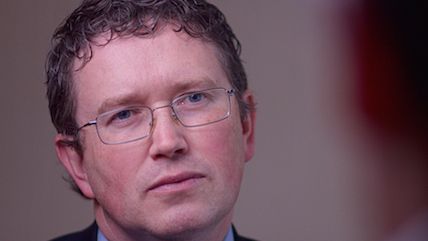 Rep. Thomas Massie (R-Ky.) explains why he is a "Hell NO!" vote on the biggest thing the House of Representatives will be voting on today: the renewal of legislation that will allow federal law enforcement to gain access to a massive database of the emails, phone calls, text messages, and more of U.S. citizens without a warrant. The database warehouses information that law enforcement collects on foreign nationals who are suspected of terrorism and other crimes; under current law, non-citizens are accorded fewer due process rights than citizens.

The underlying bill originated in the Senate and is S.139; the House counterpart is H.R.4478. As Scott Shackford explains, today's vote would

renew Section 702 of the Foreign Intelligence Surveillance Act (FISA) Amendments. This law grants intelligence agencies the authority to snoop on foreign targets on foreign soil without warrants, overseen by a secretive FISA court.

This is done in the name of stopping espionage and terrorism. But the surveillance powers have also been secretly used on Americans to track down evidence of other crimes, without a warrant, circumventing both the Fourth Amendment and the FISA Amendments' stated intent.

In the Facebook video below, Massie, a reliable defender of privacy rights and limited government, talks about the "interesting coalition of the left and the right" that opposes renewing Section 702. The ACLU and FreedomWorks, the Progressive Caucus and the Freedom Caucus, and similar pairings are against 702 because under the guise of spying on suspected foreign terrorists, the program also sucks up "terabytes" of communications involving U.S. citizens. Citing confidential conversations he's had with the attorney general and the FBI director "in a classified setting," Massie says "they believe they have the right to go into that database and search that database for information on you, without a warrant" [emphasis added].

Massie is a co-sponsor of the Amash amendment, which supporters will attempt to pass before the larger bill. The Amash amendment would force law enforcement to do what the Constitution plainly demands—that it get a warrant spelling out exactly what and why it is looking for when investigating U.S. citizens, based on reasonable suspicion of a crime, before accessing this database. "That's the only constitutional way to do it," Massie declares flatly.

If the Amash amendment doesn't pass, Massie vows to pledge "hell no" on the larger bill. For the sake of keeping the government out of our business when it has no reason or right to be involved, let's hope he and other defenders of the Fourth Amendment don't have to.