Whether or Not Trump's Libel Threat Violates the First Amendment, It's Clearly an Assault on Free Speech 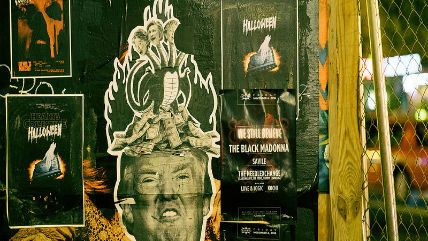 One of the president's lawyers sent a threatening letter last week to author Michael Wolff and to Steve Rubin, Wolff's publisher at Henry Holt. The attorney, Charles Harder, claimed to be "investigating numerous false and/or baseless statements" in Fire and Fury, the hot new book on the Trump administration that Wolff wrote and Rubin published. Harder demanded, on behalf of the president of the United States, that Wolff's book—that is, a work of journalism critical of Trump and his administration—be taken out of circulation.

Donald Trump is as public a figure as can be, so if Harder hopes to get anywhere with a libel suit he has to prove that the book is not just false but written with malice. In his letter he claims that Wolff's malice can be presumed because

the book admits in the Introduction that it contains untrue statements. Moreover, the Book appears to cite to no sources for many of its most damaging statements about Mr. Trump. Also, many of your so-called "sources" have stated publicly that they never spoke to Mr. Wolff and/or never made the statements that are being attributed to them. Other alleged "sources" of statements about Mr. Trump are believed to have no personal knowledge of the facts upon which they are making statements or are known to be unreliable and/or strongly biased against Mr. Trump…

That reference to "untrue statements" is rather misleading. Wolff was noting the fact that some things that sources in the administration told him might not be true, even if his reporting that they said them is. (Other journalists working apparently harder than Harder are compiling likely or confirmed fact errors in Wolff.)

The letter further accuses Wolff and Rubin of tortious interference with Trump's contractual relationship with his former adviser Steve Bannon. The book quotes Bannon seeming to violate agreements he made with Trump to not say bad things about him. (The Volokh Conspiracy's David Post explains the absurd overreach of the non-disclosure agreement our president makes everyone around him sign.)

The rest of the letter is a tediously long list of information that Harder insists Wolff and Rubin must preserve regarding the book in case this threatened but so far non-existent lawsuit moves forward.

In short: The president of the United States is demanding a book critical of him disappear from public view under threat of legal punishment.

This censorious mentality is appalling, but it sadly is not far outside the norms of American politics. Trump's own 2016 Democratic opponent, Hillary Clinton, stated frankly that the real problem with the Supreme Court decision Citizens United was that it allowed documentary filmmakers funded in a certain way to legally criticize her, apparently a nightmare that must not stand. Attempts to crush malcontents who dare criticize the president go back all the way to the Sedition Act of 1798. But that law, thankfully, was rightly critiqued at the time and expired two years later, unlamented—by most, at least.

Trump's supporters could deny that Harder's absurd letter impacts the First Amendment or freedom of speech in a political sense, since Trump is not acting as the chief executive enforcing criminal law; he's just pretending to be an aggrieved citizen suffering a tort. But some things we don't want officials to do—like, say, trying to use legal force to crush criticism—are things we shouldn't want anyone to do if we value a free society. Trump the citizen shouldn't be able to shut up his critics any more than Trump the president should.

Whether it be libel law for Trump or campaign finance law for Clinton (or invasion-of-privacy torts funded by aggrieved billionaires), legal action that squashes free expression—especially political expression, but really expression of any sort—is bad for America.

And yes, that's true even if one has said something untrue. We don't, sensibly, allow people to use the force of law against everyone who upsets or harms their feelings or interests in every case and for every reason. The harms of libel are not harms that one should be able to rectify via the force of law, since they don't directly and physically harm our bodies or justly owned property. The free society's solution to spoken or published untruths is the speaking and publishing of countering truths.

In any case, as Wolff and Rubin's lawyer Elizabeth McNamara points out in her response to Harder, his threatening letter doesn't actually name a single alleged libel in the book.

McNamara further notes that one specific accusation from Harder, regarding "false light invasion of privacy," is not even a legal cause of action in New York, and that his attempt to use an NDA that Bannon might have signed to censor a work of critical journalism is "a perversion of contract law and a gross violation of the First Amendment." She also turns around Harder's tedious list of document-preservation demands back on the president.

The fact that Harder wrote and sent that letter doesn't necessarily presage an actual lawsuit; it was likely more the sort of thing a lawyer felt obliged to do to mollify a tetchy and enraged client. The deeper problem is that Trump, when enraged, had the instinct to demand his lawyer wipe out a work of journalism critiquing his administration. That speaks volumes about his respect for free expression.