Past-month cigarette use by high school seniors has fallen by 73 percent since 1997. 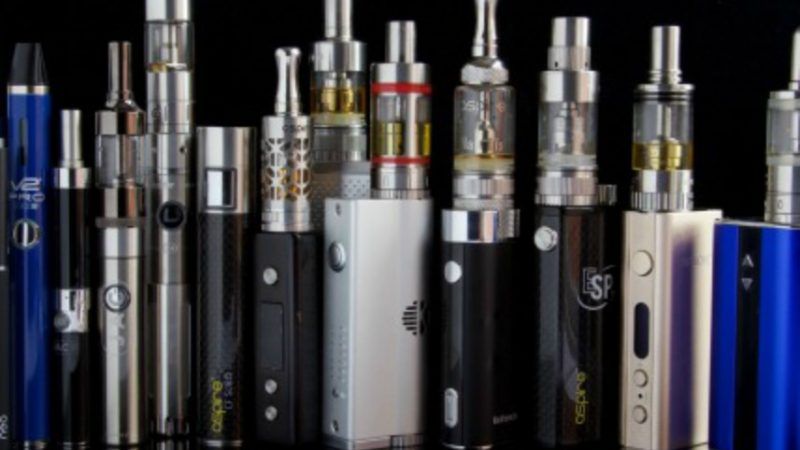 Survey data released today show that cigarette consumption by teenagers has reached "historic lows," nothwithstanding warnings that the rising popularity of vaping would make smoking cool again. In an interview with The New York Times, Thomas Glynn, former cancer science director at the American Cancer Society, called the dramatic decline in adolescent smoking since the late 1990s "an astounding accomplishment in public health." But he added that "I think we have to have alarms out" about adolescent vaping, which may yet lead to a surge in smoking. Don't give up fear!

The survey puts past-month vaping this year at 16.6 percent among 12th-graders, 13.1 percent among 10th-graders, and 6.6 percent among eighth-graders. Those rates are up significantly since last year but about the same as in 2015 and lower than they were in 2014, when the survey first asked about vaping. Earlier data from the CDC's National Youth Tobacco Survey indicate that past-month e-cigarette use by teenagers tripled between 2011 and 2013.

One reason that teenagers who vape have not gotten hooked on nicotine and graduated to combustible cigarettes is that most of them are not consuming nicotine. In the Monitoring the Future Study, 58 percent of 12th-graders who reported vaping in the previous month said their e-liquid contained "just flavoring." Even those who vape nicotine rarely do it often enough to develop a habit. The Monitoring the Future Study does not report numbers for daily vaping. But in the National Youth Tobacco Survey, less than 1 percent of middle school students and less than 3 percent of high school students report vaping on 20 or more days in the previous month.

Another possible reason why adolescent vaping and smoking rates have been moving in opposite directions, of course, is that teenagers who otherwise would be smoking are vaping instead. Since the hazards of vaping pale beside the hazards of smoking, such substitution also should count as an "accomplishment in public health."