Principle and humility are shoved to the margins of the modern GOP.

Matt Welch | From the January 2018 issue 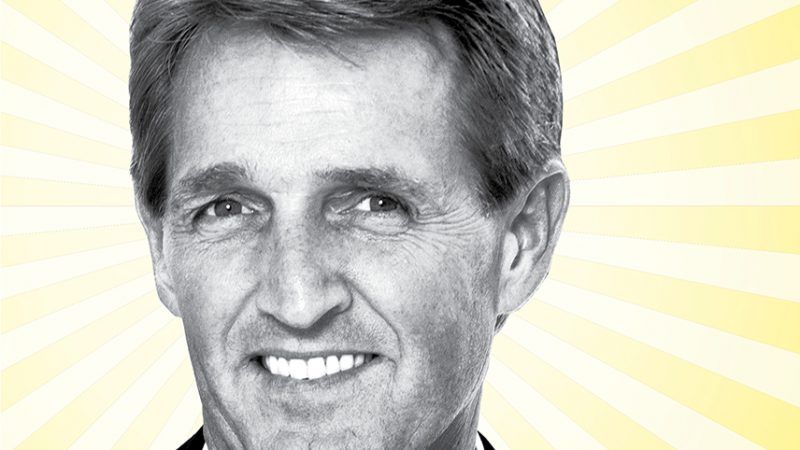 "These are challenging times," Sen. Jeff Flake (R–Ariz.) said with a little self-effacing chuckle. "The definition of what it means to be conservative has shifted dramatically over the last year or so."

We were at that most oxymoronic of Washington, D.C., events—a libertarian fundraiser for a major-party elected official. There are only about five people I'd consider doing this for, I have heard almost verbatim from hosts at two separate such gatherings in the grim political year of 2017. Los cincos amigos: Sens. Rand Paul (R–Ky.) and Mike Lee (R–Utah); Reps. Justin Amash (R–Mich.) and Thomas Massie (R–Ky.); and Flake.

And then there were four.

One week after the fundraiser, Flake made his exit from the world of electoral competition, announcing in an emotional Senate speech that he was no longer seeking re-election in 2018. "I will not be complicit," the shaky-voiced senator declared. "We must never meekly accept the daily sundering of our country—the personal attacks, the threats against principles, freedoms, and institutions; the flagrant disregard for truth or decency, the reckless provocations." The headline on his Washington Post op-ed the next day said it all: "Enough."

In the moment, Flake's gesture was hailed as a "historic" rebuke to the president (Mike Barnicle), "the most important speech of 2017" (CNN's Chris Cillizza), and even "a history lesson for the ages" (Forbes' John Baldoni). Then, predictably, a Donald Trump–related bombshell blotted out all competing political stories, when news broke three days later that Special Investigator Robert Mueller would be handing out his first indictments in the Russia probe.

Even before that, though, the relentless gears of tribal politics had been busy busting apart Flake's stentorian pretensions and spitting out dismissive bile. "Jeff Flake was just fine with broken Washington until he couldn't win his seat," Pete Kasperowicz scoffed in the Washington Examiner. "Jeff Flake is not a hero, despite what he wants you to think," ThinkProgress cautioned its lefty readers.

The critics had some valid points. Flake, like Sen. Bob Corker (R–Tenn.) before him, only turned away from politics in disgust when faced with a stiff challenge in his own primary. (And in increasingly competitive Arizona, the Democrats are putting up a strong Senate candidate in Rep. Kyrsten Sinema.) Flake also declared in his Post piece that "We can no longer remain silent, merely observing this train wreck, passively, as if waiting for someone else to do something"—but what is shying away from a political contest if not passive?

And though the former Goldwater Institute executive director may be libertarian by Capitol Hill standards, he still has taken a number of questionable votes. Flake moved to confirm as attorney general Jeff Sessions and, before that, Loretta Lynch. Both are abysmal on civil asset forfeiture, a form of government theft the senator has long decried. He voted in favor of the authorization for use of military force in Iraq, though he later turned against the war. He advocated missile strikes on Syria in September 2013 and again when President Trump lobbed some in April 2017.

But Flake also embodies the best and arguably most endangered tenets of modern Republicanism. "It is clear at this moment that a traditional conservative who believes in limited government and free markets, who is devoted to free trade, and who is pro-immigration, has a narrower and narrower path to nomination in the Republican Party," he said on the Senate floor, accurately. "It is also clear to me for the moment we have given in or given up on those core principles in favor of the more viscerally satisfying anger and resentment. To be clear, the anger and resentment that the people feel at the royal mess we have created are justified. But anger and resentment are not a governing philosophy."

It seems Flake just wasn't made for these times, and not merely because of his ideological commitments. In comportment he is a bipartisan dealmaker, not an us-vs.-them bombthrower, the most famous sign of which was his work on the "Gang of Eight" immigration reform effort that passed the Senate in 2013 but stalled out in the House.

Flake believes that long-term fiscal reform, including entitlements, must be done in such a way that both parties have skin in the game. "I was in Congress between 2000 and 2006 when we had Republicans controlling both chambers and the White House," he told Reason in 2016. "I can tell you that whenever entitlement spending or Social Security reform came up, you'd hear, 'We've got a midterm election just around the corner, we're not going to take that risk.' And if you look over the past couple of decades, all of the serious budget agreements—Gramm-Rudman-Hollings, the sequester, and others—come when there has been divided government, where both parties have said we'll share the risk and jump."

Not only is Flake eager to seek out deals with the hated opposition, he has long been willing to criticize his own team in real time. In a 2006 interview with Reason, he confessed that "there's nothing we've done as Republicans that ought to make libertarians excited about our record." Asked what the GOP Congress could do to turn that around, he replied: "At this late date? Adjournment."

But arguably the biggest difference between Flake and the main players in both American political tribes these days involves a word certain to make many readers retch: decency. Flake is a milk-drinking nice guy in a chamber better known for its smirking wise-asses (Ted Cruz, Al Franken), barking socialists (Bernie Sanders, Elizabeth Warren), dead-eyed wheeler-dealers (Mitch McConnell), and old men shaking their fists at clouds (John McCain). He winces visibly at both the insult-comedy trolling on the political/media right and the holier-than-thou condescension of the blue-state left.

"All right! Jeff Flake! Way to eventually go," late-night comedian Seth Meyers snarked after the senator's speech. "It took kinda-sorta guts to stand up only 11 months after the election and tell America not to elect Donald Trump."

Actually, Flake urged Republicans not to endorse Trump in June 2016, assessing as "beyond the pale" the then-presumptive GOP nominee's statement that the "Mexican heritage" of federal Judge Gonzalo Curiel is "an inherent conflict of interest." Two months before Election Day, Flake said he thought "Republicans do need to distance themselves from" their own candidate, and when the infamous Access Hollywood tape came out a month later, Flake tweeted simply, "America deserves far better than @realDonaldTrump." This summer, he wrote a bestselling jeremiad against ascendant GOP populism called Conscience of a Conservative: A Rejection of Destructive Politics and a Return to Principle.

In a world where Republican Trump critics are treated to vein-throbbing lectures by figures on the left—MSNBC's Lawrence O'Donnell in August eviscerated Flake for not having done "enough" against birtherism, even though the senator was initiating symbolic legislative action against the pea-brained conspiracy theory as far back as July 2009—it's no surprise that a decent-minded fellow might choose simply to walk away.

The junior Arizona senator's retirement may not prove historic, but it's a watershed moment nonetheless. Nice guys who believe sincerely in limiting the size and scope of government, even when their own political party runs it, are an endangered species. But something tells me that in the shadowy stretch between here and November 2018, they will yet have an important part to play.