Tighter Gun Laws Will Leave Libertarians Better-Armed Than Everybody Else

In a politically polarized America, gun control is destined to be obeyed primarily by its advocates. 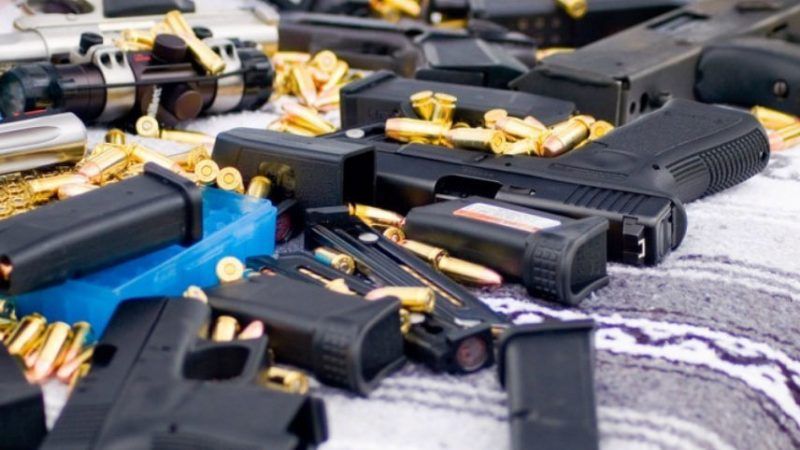 Has it occurred to anybody that when restrictive laws are imposed, they're likely to have the greatest impact on the people most willing to obey them?

The past week saw yet another invocation by the usual suspects of the supposed need for tighter gun controls. This time, we had a special emphasis from lawmakers on such "innovations" as banning people convicted of domestic abuse from owning firearms—which is to say, restrictions that are already on the books and have been in place for years, but which haven't had the wished-for effect. Honestly, so many of gun-controllers' preferred laws have been implemented that they can't be expected to know that their dreams have already come true. But laws aren't magic spells that ward off evil; they're threats of consequences against violators, enforced by imperfect and often incompetent people, and noted or ignored by frequently resistant targets.

Gun controls then, like other restrictions and prohibitions, have their biggest effect on those who agree with them and on the unlucky few scofflaws caught by the powers-that-be, and are otherwise mostly honored in the breach. As a result, gun laws intended to reduce the availability of firearms are likely to leave those who most vigorously disagree with them disproportionately well-armed relative to the rest of society. That raises some interesting prospects in a country as politically polarized and factionalized as the United States.

That gun restrictions are widely disobeyed is a well-documented fact. I've written before that Connecticut's recent "assault weapons" registration law achieved an underwhelming 15 percent compliance rate, and New York's similar requirement resulted in 5 percent compliance. When California imposed restrictions on such weapons in 1990, at the end of the registration period "only about 7,000 weapons of an estimated 300,000 in private hands in the state have been registered," The New York Times reported. When New Jersey went a step further that same year and banned the sale and possession of "assault weapons," disobedience was so widespread that the Times concluded, "More than a year after New Jersey imposed the toughest assault-weapons law in the country, the law is proving difficult if not impossible to enforce." That's in states with comparatively strong public support for restrictions on gun ownership.

Across the Atlantic, despite varying but generally tight laws on gun ownership, "Contrary to widely-accepted national myths, public gun ownership is commonplace in most European states," according to the Geneva-based Small Arms Survey. How can that be? "Public officials readily admit that unlicensed owners and unregistered guns greatly outnumber legal ones," possibly because of "a pervasive culture of non-cooperation with public authorities" in many places.

Just a thought, but existing examples of defiance of gun laws in the United States might be an indication that "a pervasive culture of non-cooperation with public authorities" is exactly what we should expect in response to any future successes gun controllers might achieve legislation-wise.

And restrictions don't affect everybody the same way. Some people embrace them, while others reject them. And no issue is as politically divisive as the gun debate.

In the United States, gun ownership and opinions on gun laws tend to divide rather starkly along tribal political lines. In last year's presidential election, gun-owning households voted overwhelmingly for Trump, while non-gun households went for Clinton. When polled, Republicans tend to be much more supportive of concealed carry, and Democrats much more supportive of restrictions, even in polling conducted after highly publicized and emotionally wrenching shootings. Unsurprisingly, surveys find that Republicans are more than twice as likely to own firearms as Democrats (49 percent vs. 22 percent), and conservatives almost twice as likely as liberals to own guns (41 percent vs. 23 percent). Less data is available for libertarians, but as you might expect the available results put us among the most overwhelmingly supportive political factions for the right to bear arms, and the most opposed to restrictions—to the point that the Public Religion Research Institute uses such opposition as part of its definition of libertarianism (along with opposition to domestic spying, support for noninterventionism overseas, low-tax and free-market views, advocacy for marijuana and pornography legalization, and more). As Harry Enten of FiveThirtyEight puts it, "The U.S. Has Never Been So Polarized on Guns."

That has strong implications for a country in which political factions now view each other with undisguised contempt. "Democratic and Republican voters… despise each other, and to a degree that political scientists and pollsters say has gotten significantly worse over the last 50 years," fret Emily Badger and Niraj Chokshi at the New York Times. "Democrats and Republicans hate each other more than they hate the Russians," marvels Reihan Salam at Slate. "More than half of Democrats (55%) say the Republican Party makes them 'afraid,' while 49 percent of Republicans say the same about the Democratic Party," according to Pew Research.

So, in an America that has an established history of widely defied firearms restrictions, how likely is it that people will voluntarily comply with laws that are intended to disarm them, and that are primarily sponsored by politicians they fear and despise?

It's worth noting here that, of all the political factions in the country, libertarians would seem to be the most naturally disinclined to knuckle under to gun laws—or any others, for that matter. In examining the moral foundations of the world views of conservatives, liberals, and libertarians, social psychologist Jonathan Haidt and his colleagues found that the first two groups view liberty as a means to an end. By contrast, "libertarians may not see liberty as a means, but rather as an end, in and of itself." Libertarians also tend to be dispassionate—except when faced with constraints on the liberty they hold as the highest moral value. "The only emotional reaction on which libertarians were not lowest was reactance—the angry reaction to infringements upon one's autonomy—for which libertarians scored higher than both liberals and conservatives."

Notably, it's not unusual in libertarian circles to call for disobedience in response to authoritarian laws. Charles Murray wrote an entire book to that effect, saying, "I want to put sugar in the government's gas tank." Philosopher Jason Brennan explicitly endorses civil disobedience as well as refusing to submit to punishment for defiance. Cody Wilson famously developed the first 3D-printed pistol and now sells the Ghost Gunner CNC mill—sort of an arsenal in a box—with the specific goal of making gun laws unenforceable. And I've explained why I'm passing disdain for the law on to the next generation, arguing that "making the world freer is always right, especially when the law is wrong."

It's not a huge step to assume that people who experience an "angry reaction to infringements upon one's autonomy" and who frequently endorse breaking the law aren't going to offer up a high compliance rate with policies that restrict liberty and that, polling shows, they oppose in large numbers. Would compliance be even lower among libertarians than it has already been in California, Connecticut, New Jersey, New York, and elsewhere among the general population of gun owners? We can't know for sure, but if any group is poised to take that as a challenge, it's libertarians.

It should go without saying that a regime of restrictive laws that ensnare only the willing and the unlucky and are otherwise widely ignored is a less than ideal situation. It sets the stage for confrontation and, like Prohibition and the War on Drugs before it, could potentially fuel forms of illegality besides civil disobedience. But there's little room for doubt that millions of Americans will continue to exercise their liberty no matter what the law says. That will leave supporters of gun controls increasingly disarmed relative to their opponents in a politically factionalized country, with libertarians probably sitting on the biggest armories.

Gun control advocates might want to give this whole matter a little more thought.