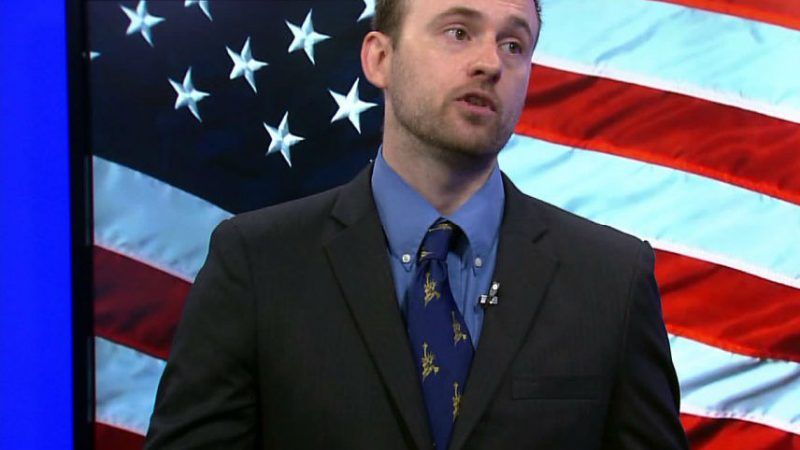 Though there is officially Too Much News happening at once right now (did you hear the one about Bono using a Maltese tax shelter to buy a shopping center in Lithuania, NTTAWWT?), you can bet that the hardcore electoral-politics junkies in your Twitter feed are finding time to obsess over tomorrow's gubernatorial election in Virginia, where former Republican National Committee chair Ed Gillespie is gaining on Democratic front-runner Ralph Northam, currently the commonwealth's lieutenant governor. Widely seen as a referendum on culture-war Trumpism, and a possible harbinger of the 2018 congressional midterms, the tightening race (with its mutual accusations of race-baiting) has Democrats and Republicans on knife's edge.

Which can mean only one thing for Libertarians. Spoiler alert!

L.P. nominee Cliff Hyra, an intellectual property lawyer with a degree in aerospace engineering (see A. Barton Hinkle's profile of him here), is polling consistently (if somewhat down since summer) between 2 and 3 percent, tantalizingly close to the average 3-point lead Northam has held over Gillespie across the past 10 state polls. The self-described "grown-up in the room" despite his mere 35 years, Hyra sounds a lot like Gary Johnson and Bill Weld in decrying the incivility of two-party politics in 2017. "I fear for the future of our commonwealth and of our nation, when even the most staid candidates feel that they have to descend to this level of discourse to win an election, and are willing to do so," he said at a press conference Thursday. He likes criminal justice reform, dislikes President Donald Trump's "divisive" rhetoric, and promises to treat every Virginian (including his political opponents) with "respect."

So will Hyra beat the spread between Northam and Gillespie? There are a couple of reasons to be skeptical. The first is that third-party candidates almost always fade down the stretch, particularly in close elections. My rule of thumb is that you can generally shave off one-third of a third-party candidate's last polling average, and you'll get much closer to the end result. Gary Johnson's final poll numbers, for example were 4.8 percent nationwide, 4.4 in Virginia; he ended up with 3.3 and 3.0, respectively. Applying that formula to Hyra's 2.5 percent average in his last 10 polls gives you a downwardly adjusted expectation of 1.7 percent. And as those numbers for Johnson also indicate, the commonwealth hasn't exactly been a stronghold for national L.P. candidates.

But locally the story is much different. The last time Virginia elected a governor, Libertarian Robert Sarvis received 6.5 percent of the vote, well over the 2.6-point margin between winning Democrat Terry McAuliffe and losing Republican Ken Cuccinelli (both of whom were widely despised, and with reason). It was, as Brian Doherty wrote at the time, "the third largest vote percentage any Libertarian has ever won for any governor's race," and "the best third party result for any party in the South for a gubernatorial candidate in 40 years." While embittered Republicans were quick to make the "spoiler" charge, "an exit poll of Sarvis voters showed that they would have voted for McAuliffe by a two-to-one margin over Cucinelli," Nick Gillespie noted then.

Then just one year later, Sarvis was back at it, drawing 2.43 percent of the vote in a U.S. Senate race won by incumbent Democrat Mark Warner by just 0.81 percentage points over—you guessed it!—Ed Gillespie. (There the Libertarian's impact on the major-party race was much more disputed.) At any rate, there is some muscle memory among the Virginia electorate and political class to take Libertarians at least somewhat seriously. This is also the case among pollsters, who have been including Hyra in most every survey, making it difficult to tease out what the "Hyra effect" might be on the two-party race.

So are there any lessons about Hyra's candidacy we can glean here on Election Eve? I would suggest three exceedingly modest ones: 1) The Libertarian Party keeps reinforcing its place as the third party in American politics (no other party has a gubernatorial candidate in Virginia). 2) At least in this one race, we have a candidate cut more from the Johnson/Weld cloth of being comparatively normal and strategically nice, as opposed to blue-faced or stridently nationalist. And 3) Like Johnson/Weld and in fact Sarvis before him, Hyra was shut out from the debates and seems destined for those all-too-familiar single digits.