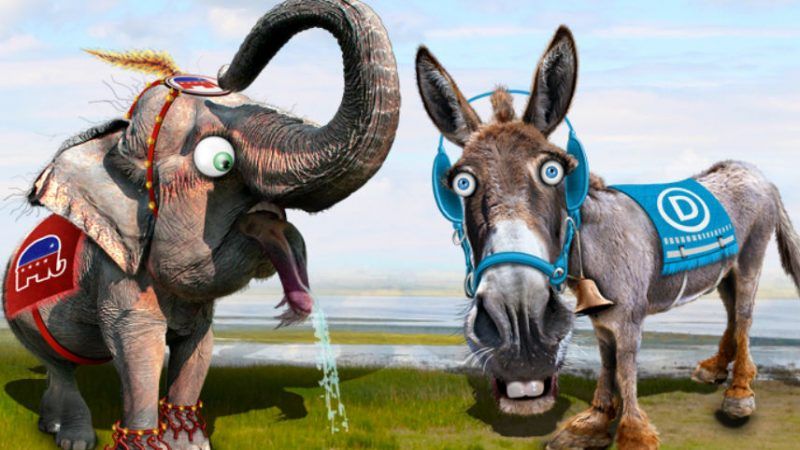 "The state of the Republicans is particularly parlous," The Economist noted last year, before our country's political fissures further deepened and widened, "But the contradictions among Democrats, though less obvious, also run deep."

How much deeper and wider those fissures now run was demonstrated last week with Sen. Jeff Flake's (R-Ariz.) announcement that he won't seek reelection. It was the latest evidence that American electoral politics are fracturing in ways that offer less and less to people who reject tribal contests and think live-and-let-live is an attractive philosophy. Actually, it's a big problem for anybody who just wants clear choices.

With his poll numbers tanking after his outspoken attacks on President Trump's protectionism, saber-rattling, and xenophobia, the junior senator from Arizona publically conceded that "a traditional conservative who believes in limited government and free markets, who is devoted to free trade, and who is pro-immigration, has a narrower and narrower path to nomination in the Republican party." It was time for him to try his luck at something else.

In another country, that might mean switching to another political label. But America's political system has never been good at fulfilling one of the premises of a democracy: that when you pick your poison at the ballot box, you at least have some idea of the flavor of the toxin you've chosen. Our two institutionalized political parties long muddied those choices, with a mushy center-right party facing a mushy center-left party, whatever the characteristics of individual candidates. These days, the Republican and Democratic Parties remain dominant—by design–even as Americans become more starkly divergent in their political positions. But while Flake and his friends obviously no longer feel welcome in the GOP, it's less apparent than ever what that party does embrace—and it's only slightly clearer what the opposition Democrats represent.

"Nearly a year after Donald Trump was elected president, the Republican coalition is deeply divided on such major issues as immigration, America's role in the world and the fundamental fairness of the U.S. economic system," the Pew Research Center announced the same day that Jeff Flake said he'd had enough. How deeply divided? Of the four parts into which Pew divides the Republican coalition, one (Market Skeptic Republicans) doesn't really believe in the free market and supports higher taxes—although they're not as dubious about free trade as Country First Conservatives. Core Conservatives and New Era Enterprisers, on the other hand, favor the market, but the second group is also better-disposed than the other factions toward larger, interventionist government.

The groups vary widely on social issues, with Country First Conservatives opposed to same-sex marriage, while the other three factions are generally comfortable with the practice. Market Skeptics are the only majority pro-choice faction when it comes to abortion, although New Era Enterprisers aren't too far behind. New Era type are the only one of the Republican factions within which a majority believe that immigrants "strengthen U.S. with hard work and talents"—zero percent of Country Firsters support that position.

The sheer incoherence of the Republican coalition raises questions about whether the GOP is a political party in any meaningful sense of the term. What does it stand for? It's clear that Republicans do in fact have strong beliefs, but they have enough of them that are incompatible to make for two or three competing organizations. Given that candidates generally work with their colleagues to achieve their party's general agenda, to what particular poison is any given GOP voter committing when filling in a ballot?

But let's not let the dog's breakfast that is the Republican Party conceal the messiness across the aisle. Democrats are for the moment in better shape than their official rivals, but they also have to reconcile Opportunity Democrats who overwhelmingly believe people can get ahead through hard work with Solid Liberals who overwhelmingly believe nothing of the sort. If Solid Liberals have little faith in the work ethic, they do believe that government does a better job than it is given credit for—a conceit that Disaffected Dems find laughable. That's probably why Disaffected Dems along with the Devout and Diverse don't share the positive opinion of government economic regulation held by the other factions in the Democratic coalition.

The Devout and Diverse are the most religious of Democratic groups and the most split of the coalition on the abortion issue, with just a slight plurality favoring pro-choice views. They're equally divided about the contributions of immigrants. Where the Democratic factions generally agree—the issues arguably holding them together—are those involving race and the welfare state. Overwhelmingly, they say the government should do more. (Interestingly, the traditional backbones of both parties—Core Conservatives and Solid Liberals—are the two groups least likely to agree to sacrifice privacy for promises of safety from terrorism.)

So a voter picking a Democratic candidate is most likely marking the ballot for more government services. But otherwise, that voter buys a mystery package just as if they'd marked a Republican ballot—especially when it comes to the sort of economy that's going to pay for the goodies.

Pew's categories are, frankly, confusing—the organization has taken some pains to explain (not convincingly, to me) why it doesn't use more commonly accepted terms. In particular, Pew has repeatedly written about why its categories don't use "libertarian" even though it has found reasonably consistent supporters of freedom to make up between 5 percent and 10 percent of the population. The organization's current set of questions for determining typologies are intensely frustrating in their phrasing and underlying premises (I gave up halfway through). That said, there's plenty of evidence here that to the extent the major political parties offer a choice at the ballot box, it's among surprise gifts with the contents to be revealed only after the votes are counted.

That still leaves us choice between political tribes, I guess. But to make any sort of an informed selection beyond tribal affiliation—to pick our poison from between our traditional major party selections, we can't even begin to decide whether one or another of those partisan toxins suits us until we have a better handle on what they are.