Trump, Pelosi, and Schumer Are Besties: The Case Against Bad Bipartisanship

The president and congressional Democrats just worked together on a bad debt ceiling and budget deal. 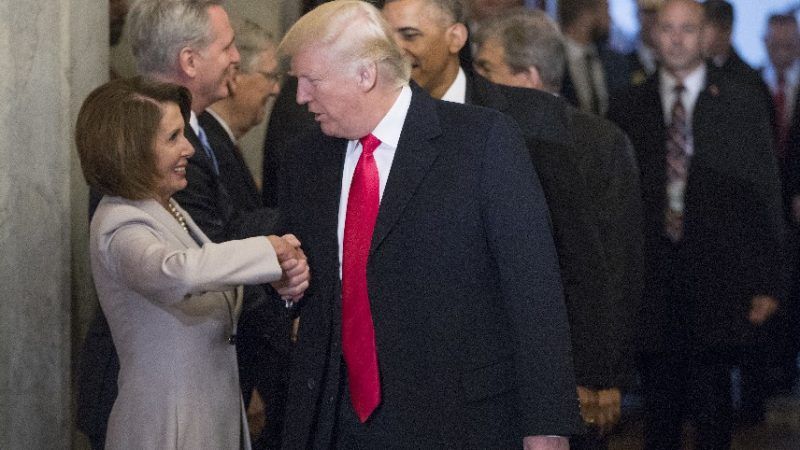 This morning the House voted to pass a package that granted $15 billion in Hurricane Harvey aid, raised the debt ceiling, and funded the federal government for the next three months. It was a blow to fiscal restraint and hurls the can down the freeway yet again on important long-term questions about borrowing and spending. The deal was the product of an unlikely collaboration between House Minority Leader Nancy Pelosi (D–Calif.), Rep. Chuck Schumer (D–N.Y.), and President Donald Trump. The vote was 316-90.

On Wednesday, in a speech at a refinery in North Dakota, Trump has this to say about the meetings where the deal was hammered out:

I had a great bipartisan meeting with Democrat and Republican leaders in Congress, and I'm committed to working with both parties to deliver for our wonderful, wonderful citizens. It's about time. We had a great meeting with Chuck Schumer, Nancy Pelosi, and the whole Republican leadership group. And I'll tell you what, we walked out of there—Mitch and Paul, and everybody, Kevin—and we walked out and everybody was happy. Not too happy—because you can never be too happy—but they were happy enough.

There's a misconception that bipartisanship is a good in and of itself—that hands joined across the aisle are a sign that better natures have prevailed, that common sense policy is being implemented, or that petty grievances have been set aside.

That's virtually never true and this week's bizarre new BFFs are a perfect illustration of why.

Much of the motivation for this particular deal seems to have been spite, not harmony: Trump's desire to root the troublesome remnants of fiscal conservatism on the Hill—the Tea Party/Freedom Caucus types who still hold a bit of Speaker Paul Ryan's heart and attention. Trump's comments notwithstanding Ryan (R–Wisc.) and other GOP congressional leaders were unceremoniously cut out of the negotiations, after offering a plan that made at least some nod to fiscal discipline, however small.

What's worse: To the extent that today's deal was driven by a common understanding between parties, it's a wrongheaded, economically illiterate populist one—the belief that ever-increasing debt-funded spending on both a permanent and emergency basis can solve America's fiscal and economic problems.

This everybody-gets-everything strategy for dealing with partisan conflict is common, and appears all levels of government. You get money for your stuff, I get money for my stuff, and we'll worry about where the money is coming from later. This is just as true in city council meetings where bike paths are exchanged for zoning exceptions, as it is on Capitol Hill.

Listen, good bipartisanship is good. I like it as much as the next guy when politicians work together to do things I like. But the arc of bipartisanship is long and it bends toward more spending. As I've said before: If everyone on the Hill is happy, you probably shouldn't be. This goes double if everyone on the Hill except the people to committed to fiscal discipline are happy.

Perhaps people of both major parties can come together and agree on this point: There's something deeply unnatural about the idea of Donald Trump, Nancy Pelosi, and Chuck Schumer getting along, and it's not going to end well.