What Korean sex workers "were doing could not be called consensual because they were being paid," Val Richey tells The Seattle Times. 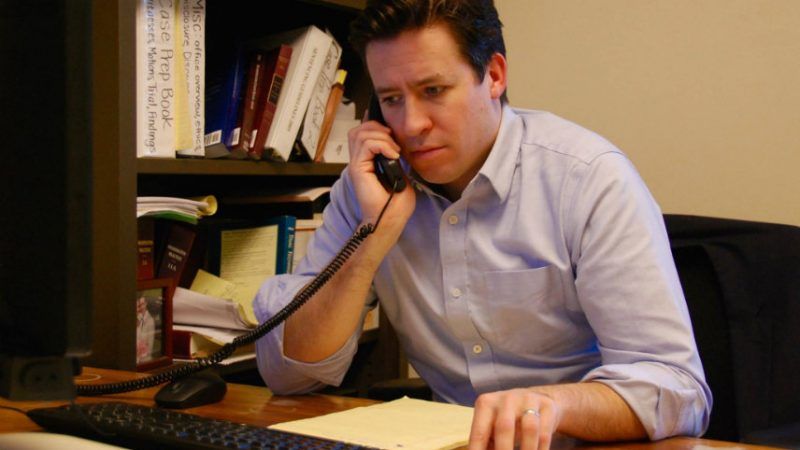 In Seattle, sex must be a "leisure activity" for both parties or it's nonconsensual, according to one area prosecutor. In a splashy Seattle Times feature in which local law enforcement play hero protagonists, Val Richey—a senior deputy prosecuting attorney for King County, Washington, and one of the driving forces behind the area's anti-prostitution efforts—lays out his tortuous framework for treating all sex workers as victims of rape and, in this case, human trafficking.

"What you have is someone paying this person essentially to turn a 'no' into a 'yes,'" Richey told the paper. "Because as several of the buyers…observed, these women, as a leisure activity, are not looking to have sex with 10 guys in a day. They're doing it for the money."

By that logic, anyone who wouldn't perform their job without remuneration is a victim of labor trafficking!

But Richey is "adamant," as the Times tells it, that what Korean sex workers in the area "were doing could not be called consensual because they were being paid."

Alas, this is one of the folks who decide what offenses the county decides to prosecute and how those cases proceed. Richey was integral to the 2016 shutdown of a Seattle sex work forum called The Review Board, and along with it several "brothels" that primarily employed Korean women.

The Review Board case started out as an investigation into human trafficking. Finding no evidence of such, it then turned into a witchhunt against people who posted online prostitution reviews. At this point, more than two dozen men have been charged with promoting prostitution—a felony offense generally reserved for pimps, madams, and others intimately involved with the trade—for writing about alleged sexual escapades on a members-only website.

I've been following this story for over a year now, I've combed through copious court documents related to the case, and I've talked to many of the principal people involved. (See my feature from last fall for an expansive look at the case.) I can say confidently that the Seattle Times' telling of the story gets at least as much wrong as it gets right.

To her credit, writer Lynn Thompson does include perspectives from local sex workers, and she doesn't overdramatize the basic facts of the case. She accurately describes The Review Board as a place where sex workers advertised and their customers—or "hobbyists," as they called themselves—posted reviews and interacted with each other. Much of the initial coverage of the case erroneously identified it as a forum where men knowingly shopped for and evaluated "sex trafficking victims." But numerous independent Seattle sex workers considered it a valuable resource both for marketing and for personal safety.

The article also accurately portrays the Korean sex workers involved as women who flew into town independently, worked out of upscale apartments where they were not confined, and were well-paid. Most would stay in town for a few weeks, working as a sort of temp contractor for one of the area's "K Girl" agencies or renting a room from fellow Korean sex workers who had put down roots in the area, before heading to similar setups in other cities or back to where they regularly resided.

These women had mostly come to the U.S. on tourist or student visas, police say; they were not smuggled in illegally or brought here against their will. Officers from the King County Sheriff's Office and the Bellevue Police Department made months' worth of undercover visits to them before raiding the K-Girl "brothels" in January. If these were really "true victims of human trafficking" (as King County Prosecutor Dan Satterberg described them at a press conference) who were being raped multiple times per day (as Richey asserts), how do police justify just letting it happen for months and months as they continued to build a case against the men who posted to The Review Board?

Of the 12 women police discovered during the raid, none elected to testify against any of the defendants or stay in contact with police. "Our approach was to allow the women who we recovered from these places to go, without requiring their testimony or requiring them to stay here," Richey told me last summer. "Many of them I think just wanted to leave."

But King County was determined to make a case, victims or no victims. Three people were arrested on human trafficking charges—charges later reduced to permitting and promoting prostitution. The worst that could be pinned on one of these so-called "human traffickers" was that "occasionally another woman would come and work" from her apartment, Richey told me. (The alleged trafficker in question was a Korean immigrant and sex worker herself.) As for the other two "traffickers," ultimately "the evidence was more that [they were] providing a place" and "promoting the prostitution of numerous foreign nationals."

The Times article reports that one these defendants, Donald Mueller, told the cops the women he employed were typically forced to work in prostitution to pay off debts they or their family owed to corrupt Korean money lenders. In fact, police claim Mueller told them that he likes to employ young Korean women because he found that many had racked up high amounts of credit-card debt. Mueller may not come across as sympathetic either way, but there's a big difference between selling sexual services to pay off credit-card bills and selling sexual services because a nefarious loan shark is threatening to kill you otherwise. (It should also be noted that almost all of the more damning statements attributed to defendants are presented as paraphrased snippets of conversation, and are not backed up by any textual or recorded evidence.)

Similarly, Thompson's article mischaracterizes The Review Board owner Sigurd Zitars as limiting ads from Asian women because Zitars was "alert to the possibility that the women were trafficking victims" and might thereby attract police attention.

Zitars did tell an undercover detective that he limited ads from Asian sex workers, according to the charging documents. But he explicitly stated that this was because cops think these women are trafficking victims, even though "that isn't the case." In the same conversation, Zitars allegedly lamented that all the money Barack Obama and "the feds" were funneling toward fighting human trafficking was actually being used to target consenting activity between adults.

Zitars fatally shot himself last summer, after having his name slandered across national media as a calculating sexual slaver who helped smuggle Korean women around the country.

The above are just a few of the details the Times gets wrong—small details, sure, but taken together they significantly shape the story in a certain direction and negate any neutrality the writer may have been striving toward.

Bottom line: King County law enforcement ruined dozens of people's lives with this prosecution and put countless women at risk; a lot of Seattle sex workers complain that clients are now less willing to cooperate with screening measures, leaving those who can't afford to be picky to take their chances. And all with nothing to show for it in terms of saving victims of sexual exploitation, stopping abusive predators, or discovering deeper criminal networks. The cops are the villains of this story, not the heroes.