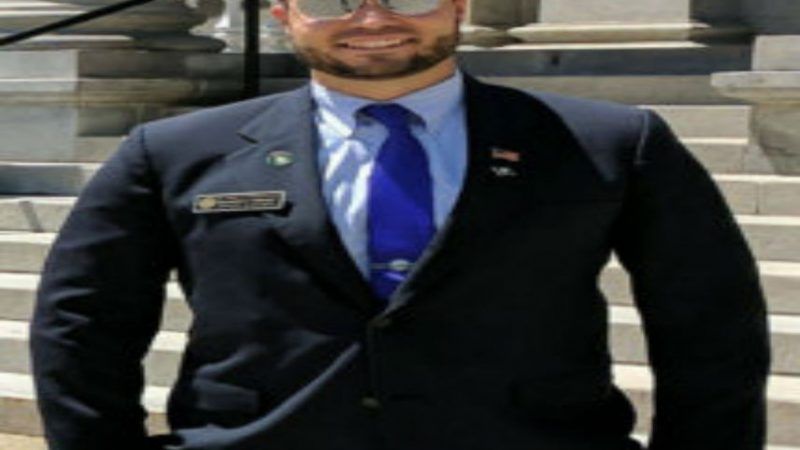 "The Libertarian Party platform gives us, as legislators, the best possible framework to expand social freedoms, support a free-market economy, and ensure the checks and balances on government power are enforced," Phinney said in the Libertarian Party's press release announcing the switch.

Phinney works for the Carroll County Department of Corrections. (Being one of the 400 members of the New Hampshire House is a part-time job.) "We do what we can to rehabilitate offenders, implement new programming in the county to help addicts get treatment, and we manage inmate behavior," he described his day job in a phone interview this week after he announced his move to the Libertarian Party.

His work in corrections "has given me inspiration as far as government's role in policing" and led him to realize "we need to be ending the drug war. I know the system is broken. I know there are people in jail who don't need to be there."

Before running for office last year, Phinney had been deployed for a year to the United Arab Emirates with the New Hampshire Army National Guard working as a construction engineer.

He has also been slightly famous in atheist circles for being a rare out-and-proud atheist politician. Phinney himself doesn't like to make too much of that, and points out that it isn't his atheism per se but his atheism combined with his previous GOP membership that made it seem like news, since Republicans "have a tradition of being faith-based." (He even once sang for a metal band named Godcrusher.)

Phinney says his initial attraction toward government work came from "issues in the past with the family court system" and a desire to reform such policies in a more father-friendly direction, though he doesn't want to discuss his personal specifics and says they are not currently an active problem in his life.

The issues he likes to front and center as a legislator that he discussed in our phone interview include some that fit well with the Libertarian Party platform—such as marijuana legalization—and some that don't—like increasing state programs for veterans. But he describes his overarching way of judging proposed legislation as having "three criteria, which are, will [a bill] expand government growth? Will it have a burden on taxpayers? And is it in the interest of freedom?"

Like fellow L.P. convert Stallcop, the former Democrat, Phinney at first considered running as an independent but found the ballot access issues too troublesome and thought the Republicans were the major party that were "closest to what I felt." He has since realized that the Republican platform didn't "actually represent what I thought should be the role of government in our lives."

He quickly found caucusing with the GOP wearying and "stopped going" to the meetings; "every time something controversial came up they wanted the Party to vote united." Phinney didn't always want to go along with their desires but "they didn't want to hear" any dissent from the Party line.

He says his friend Dyer helped him see the way clear to the L.P. switch. He'd been thinking about it since February and knew for weeks before the official announcement he intended to do it. The only Republican he informed beforehand was Gov. Chris Sununu, during a conversation over why he, Phinney, was not going to be able to vote for the budget the Republicans proposed since it raised spending too much. The $11.7 billion budget will put state spending on an "unsustainable" course, Phinney believes. (He found Sununu "nonjudgmental, understanding of why I felt that way" about the Party switch.)

Like Dyer, Phinney is also confident many other New Hampshire House members are philosophically more compatible with the L.P. than the two major parties, but are afraid to make the switch out of fear of losing re-election, a fear he hopes he and Dyer can prove groundless in 2018. His own town of Rochester, he says, tends to "lean purple" and he hopes name recognition from retail politicking and his incumbency will make the L.P. switch irrelevant to his constituents. Even running as a Republican he says his constituents "knew I have these philosophies, they get it, no problem."

Although he has a tendency to stutter and thus found door-to-door contact with voters sometimes nerve-wracking, Phinney says it's essential to winning in New Hampshire's small districts. He won his first race with 2,323 votes, only 117 votes more than a Democrat who Phinney says didn't even campaign. He does not yet know who, if anyone, he'll be running against next year from the two major parties. He advises would-be voters to look beyond Party labels and "see how I voted. That's what actually matters. If I voted in your best interest, keep me in. If I haven't, vote me out."

Fear of a Libertarian New Hampshire

Phinney has lived in New Hampshire since the late 1990s, predating the Free State Project, which advocates the libertarian-minded moving to New Hampshire to sway its politics in a liberty direction. While Phinney thinks it's a "great idea to get people who want to minimize the scope and power of government to come to this state" he has no specific opinion about anything any given Free Stater has said or done. He is aware that some New Hampshire residents "view them in a not-so-favorable light. I personally don't have an opinion as long as they are not hurting anyone."

The FSP's existence helps draw out concerns that make political progressives unhappy with the thought of libertarians in their midst. The folks at FreeKeene, not institutionally affiliated with the FSP, recently summed up a 90-minute anti-libertarian presentation by Zandra Rice Hawkins of the group Granite State Progress.

Hawkins is trying to get her fellow citizens of New Hampshire to believe the FSP's mission involves attempted secession from the U.S. (it does not), to worry that the FSP's internal communal self-help and attempts to help their communities' food needs are just sinister cover for their radical mission of dismantling government, and to condemn them for their alleged connection to the national website CopBlock which encourages keeping an eye on and curbing the power of police to harass citizens.

Compare those fears with how Phinney expects to guide his future as a state representative, believing that all he and his fellow Libertarians are "trying to do is minimize government interference in lives and businesses and just try to keep as much money in people's pockets" as possible.

To many Americans, that sounds like common sense. To those living in quivering fear of a Libertarian New Hampshire in which people might just, to sum up some of Hawkins' worries, keep a watchful eye on police, act undignified in court, pay other people's parking meters, or advocate for legalization of drugs and prostitution, it sounds like something that requires organized opposition, including trying to keep a public record of Free State Project associates involved in New Hampshire politics. She is especially worried that some of them even fly under the Democratic Party's banner.

As the recent moves of Phinney, Dyer, and Stallcop to the Libertarian Party show, the libertarian-minded certainly can keep using major party labels if they wish. But in New Hampshire, they may not have to. The electoral success or failure of Dyer and Phinney in 2018 will tell.