In Major Free Speech Victory, SCOTUS Rules for 'The Slants' and Strikes Down Federal Trademark Restriction

"Speech may not be banned on the ground that it expresses ideas that offend." 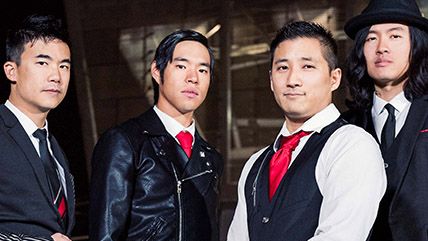 Today the U.S. Supreme Court ruled 8-0 in favor of the Asian-American dance-rock band The Slants, holding that the First Amendment protects the rights of the band's members to register a trademark in their band's "offensive" name.

At issue in Matal v. Tam was a federal law prohibiting the registration of any trademark that may "disparage…or bring…into contemp[t] or disrepute" any "persons, living or dead." The Patent and Trademark Office cited this provision in 2011 when it refused to register a trademark in the name of The Slants, thereby denying the band the same protections that federal law extends to countless other musical acts. Justice Samuel Alito led the Court in striking down the censorious rule. "We now hold that this provision violates the Free Speech Clause of the First Amendment," Alito wrote. "It offends a bedrock First Amendment principle: Speech may not be banned on the ground that it expresses ideas that offend."

Justice Alito demonstrated little patience for the federal government's position. The government's arguments, Alito observed, boiled down to this: "The Government has an interest in preventing speech expressing ideas that offend." As Alito noted in response, "that idea strikes at the heart of the First Amendment. Speech that demeans on the basis of race, ethnicity, gender, religion, age, disability, or any other similar ground is hateful; but the proudest boast of our free speech jurisprudence is that we protect the freedom to express 'the thought that we hate.'"

In this case, there was nothing hateful about the band name. As Slants bassist Simon Tam told Reason.tv's Meredith Bragg, the whole point of the band's provocative name was to challenge anti-Asian stereotypes. "For me, this whole fight has not been just about the band name and our right to access the trademark registration," Tam said. "When I found out what the government was doing and how they were doing it, how they were using it to suppress speech and how they were trying to take rights away from my own community, I decided that was not right. So all of a sudden it became about principle. When I believe they are violating the values of our country and violating my own values, I decided that had to be stopped, no matter the cost."

Today Tam prevailed in his fight for principle. Thanks to his efforts, the First Amendment stands on stronger footing.