Trump's New Line on NATO: Expensive, But Worth It! 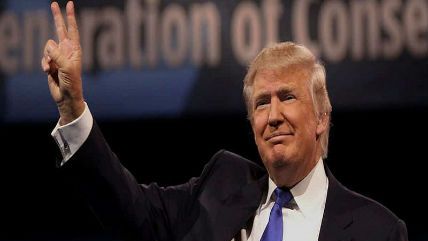 Candidate Donald Trump delighted some and depressed others with a seeming willingness to rethink the necessity of our NATO alliance. He worried out loud about how much it cost us versus how little it cost our allies, most of whom are not living up to their commitment to spend 2 percent of their GDP on their military. He even called NATO straight-up "obsolete" in the post–Cold War, war on terror age.

Today Trump gratified NATO fans by saying out loud that of course we will always live up to our obligations under its Article 5, the most dangerous part, requiring us to come to the defense of any ally in case of attack (even, say, countries like recent entrant Montenegro, a corrupt nation, home to illegal arms smuggling and dealings and on the edge of many potential conflicts with neighbors).

In keeping with Trump's general fecklessness about spending, he uses NATO—in his eyes that once-obsolete alliance in which our fellow members took advantage of us—as an excuse for more U.S. spending.

As Huffington Post reports today, Trump said at a Rose Garden press conference this morning that our need to go to war in defense of our NATO allies is "one of the reasons that I want people to make sure that we have a very, very strong force by paying the kind of money necessary to have that force."

Our NATO commitments and expenses of billions and over 60,000 troops may reasonably seem less than relevant to actual U.S. security concerns in the age of the war on terror. But when it comes to keeping the military spending ball rolling to crushing debt and beyond, Trump will go along, any earlier rhetoric questioning spending or commitments ignored.