The TSA Turns Harassing Travelers Into a Fine—and Pointless—Art

Security officials who fail every test thrown their way, plan to inflict the punishment for those shortcomings on airline passengers. 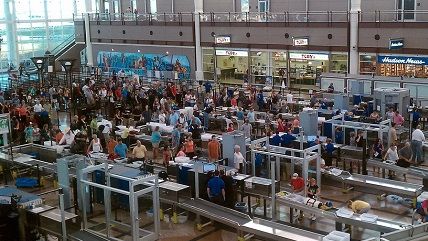 "Food can trigger lots of false alarms because of the density of some items," the Wall Street Journal recently reported about the Transportation Security Administration's justifications for imposing yet another round of tighter and more-intrusive airport carry-on baggage restrictions. "Chocolate, for example, can look like some types of explosives to X-ray machines."

As a result, some airline passengers around the country—soon to be all of us—are being asked to remove such items as books, electronic devices, and food from carry-on luggage for separate screening.

This makes an odd sort of sense (not really). An internal investigation of the TSA, leaked in 2015, found that many types of explosives apparently look to agents quite a bit like chocolate. Guns seem to closely resemble Tom Clancy novels in their eyes. Knives may be easily mistaken by the thin uniformed line against especially dim terrorists for those fuzzy troll dolls, though that part is a bit unclear. Well, maybe that's not all true. But such confusion would explain why "TSA agents failed 67 out of 70 tests, with Red Team members repeatedly able to get potential weapons through checkpoints."

"In one test an undercover agent was stopped after setting off an alarm at a magnetometer," ABC News noted, "but TSA screeners failed to detect a fake explosive device that was taped to his back during a follow-on pat down."

Well, they should obviously have used chocolate in the test. Maybe a few of those suspicious-looking Toblerone bars kids sell door to door would have set their spidey-senses tingling.

After that embarrassing failure, the TSA's working theory seems to be, if you make everybody dump their sandwiches, tablets, and paperbacks into separate bins at the security checkpoint, we vastly increase the chance of intercepting backpack nukes and rocket-propelled grenades, which themselves could be mistaken for sandwiches, tablets, and paperbacks. Sure, the guards may still need some guidance as to which confiscated items are safe for noshing, but the security measures will be covering all bases.

The TSA has been quietly implementing the new rules at airports around the country, resulting in predictable screams when security guards at Kansas City International Airport forced passengers to dump paper products, even including documents and Post-It notes, out of their carry-ons. The TSA initially blamed the incident on the local security contractor and made appropriate apologetic noises. Weeks later, the feds admitted that the scrap-paper limitation was part of a test program already in place at airports including Boise, Colorado Springs, Detroit, Fort Lauderdale, LAX, Boston, Lubbock, Munoz Marin in Puerto Rico, Las Vegas, and Phoenix. Full implementation of the finalized rules is expected after the summer travel rush.

Well, you can't be too safe. You can get the nastiest paper cuts from Post-It notes. And don't get me started on playing cards. In the wrong hands, there's nothing more dangerous than a full house.

It could be worse. Flights from 10 Middle Eastern airports to the United States are subject to new rules "requiring that all personal electronic devices larger than a cell phone or smart phone be placed in checked baggage." The restrictions will likely expand further, since "Secretary Kelly affirmed he will implement any and all measures necessary to secure commercial aircraft flying to the United States – including prohibiting large electronic devices from the passenger cabin – if the intelligence and threat level warrant it."

Those rules are still discussed only in the context of international flights, though the new separate screening rules for books, electronics, and food point to a serious convergence of hassle factors for anybody setting foot in an airport no matter the destination. And it may be only a matter of time before we all fly unplugged. Security expert Bruce Schneier doesn't believe the laptop ban makes any sense, since such a device is no safer in the cargo hold than the cabin, and can be more easily screened at a checkpoint than in luggage. But if it's going to be imposed, "why aren't domestic flights included in this ban?… [A]nyone who could detonate a laptop bomb on his international flight could do it on his domestic connection."

Oh, please don't give them ideas.

While it's understandable that the TSA might want to reduce its 95 percent failure rate when detecting bombs and weapons, it's not so clear why it has chosen to do so by targeting passengers' lunches and reading materials for special scrutiny. There might be an easier way. Maybe the screening devices just need a good thump on the top to get them working properly (maybe the operators do too, but that's a different issue). After all, the DHS Inspector General warned just two years ago that "Because TSA does not adequately oversee equipment maintenance, it cannot be assured that routine preventive maintenance is performed or that equipment is repaired and ready for operational use."

"If the equipment is not fully operational," the report added, "TSA may have to use other screening measures, which could result in longer wait times and delays in passenger and baggage screening."

"Other screening measures" like making everybody sort their possessions into separate trays? Huh.

Don't count on TSA getting around to that equipment maintenance anytime soon—or to seriously addressing its employees' inability to identify forbidden stuff mixed in with passengers' belongings. The agency tasked with travel security, or just with hassling travelers, has a lousy history when it comes to dealing with its shortcomings.

In 2012, the DHS Inspector General assessed the TSA's handle on controlling access to the sensitive areas at airports—you know, all the areas the checkpoints and locked doors are supposed to protect. It "identified access control vulnerabilities at the domestic airports where we conducted testing," though the details were classified.

Last October, a little insistently, the IG put out a more detailed report covering the TSA's handling of ID badges that allow people access to terminals, cargo areas, and airfields. It turned out that "some airport operators and TSA personnel were misinterpreting its guidance on how to determine the acceptable percentage of lost, stolen, or unaccounted for badges," and referred to a report that "an official from the Hartsfield-Jackson Atlanta International Airport said that, over 2 years, more than 1,400 badges were lost or stolen."

So the screws get tighter and tighter at the security gauntlets suffered by passengers, while actual bad guys could bypass all of that by availing themselves of potentially thousands of lost and stolen ID badges allowing relatively easy airport access.

Keep that in mind when you line up to sort your possessions into appropriate trays at the security checkpoint. As the hassle factor rises, the only way to make your flight without suffering an outrageous degree of pointless harassment might be to get your hands on one of those missing ID badges.

Especially if you're carrying chocolate.