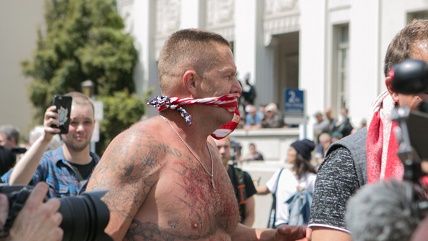 "Political life and discourse in the United States is at a boiling point," Middlebury College Professor Allison Stanger wrote after she and political scientist Charles Murray were assaulted, and she injured, by protesters violently opposed to granting Murray any forum to discuss his research and opinions.

Stanger largely laid the blame for escalating tensions at the (tiny?) feet of President Trump and his confrontational manner. The implication is that dumping the current White House tenant would calm national disagreements. But Trump didn't elect himself to office—millions of Americans did the deed in a political environment that was already fraught with tension. So don't look for easy fixes; tempers are unlikely to simmer down when political tribes see each other as enemies in a high-stakes struggle for control of a government they venerate for its power to fulfill wishes and crush enemies.

Since Stanger penned her words, and certainly since I last wrote just months ago about lefty thugs living out Weimar fantasies, political violence has escalated and, inevitably, involved more participants as demonstrated in a litany of grim news stories. For the moment, the lethal stabbings of two people by a white supremacist on a Portland, Oregon train have overshadowed the election to Congress of Republican Greg Gianforte, who prevailed despite or because of a criminal charge for body-slamming a reporter the day before the vote. Almost lost in the mix was the near-simultaneous arrest of a sometimes college professor on four counts of assault with a deadly weapon for his attacks on Trump supporters during a political rally in Berkeley, California.

"As political passions and political polarization continue to rise, intimidation and physical violence seem to be becoming more common as a part of our political life," writes social psychologist Jonathan Haidt. He referred primarily to the conflict on college campuses, but also referenced the growing strife between ideological tribes in the world outside among "extremists on the right, as well as the left."

That strife now includes violent street clashes in places like Berkeley and Portland between ideological groups out to stomp each other.

"The metro area has witnessed at least six rallies or marches where some segment of the extreme right and militant leftists have confronted each other in public spaces," the Willamette Weekly reported last week.

A Boston protest earlier this month also turned nasty, with at least one violent incident between what the Boston Herald described as "conservative protesters" and "counter-demonstrators from local socialist and anti-fascist groups."

The political polarization to which Haidt refers plays a growing role in American life and politics, and lies at the heart of the nastiness. Lifestyle increasingly correlates to political views, meaning where we live and how we live are, for many Americans, closely connected to our policy preferences.

"Conservatives want to live overwhelmingly where houses are farther apart even if you have to drive to schools or stores," according to Bill Bishop, author of the The Big Sort: Why the Clustering of Like-Minded America Is Tearing Us Apart. "And liberals want to live in a place that's walkable even if the houses are smaller and you have a smaller lot."

"The separation here seeps into the micro level, down to the particular neighborhoods, schools, churches, restaurants and clubs that tend to attract one brand of partisan and repel the other," The Washington Post found last year. And, as people congregate with the like-minded, they reinforce their shared views "producing a stereotypical world of 'latte liberals' and 'bird-hunting conservatives'" according to a 2015 study.

That growing association between lifestyle and ideology even points to the possibility, according to recent research, that when people date and marry partners with whom they share common interests, they're likely to pick people with similar political beliefs. "This result suggests a pathway by which long-term couples come to share political preferences, which in turn could be fueling the widening ideological gap in the United States."

Distinctive associations between lifestyle and politics create a situation in which ideological opponents can be punished through the use of laws that aren't overtly partisan, but target values and activities favored more by one tribe than another. Is that proposed gun control law a public safety effort or a screw-you to conservatives? Does that bathroom bill represent real concerns about child-predation or a legislative middle finger to liberals?

It may not matter when polling finds that majorities of Americans actively dislike their countrymen who hold opposing political views. It's political combat no matter what, and every move is hostile.

Even when policy proposals aren't explicit exercises in political punishment, they're extremely high-stakes as government seeps into every facet of life. Laws, licenses, bans, and mandates can make or break careers, create or destroy fortunes, and send people to prison. That raises the temperature on political debates in which many people want very different, and incompatible, outcomes.

Do you want the state heavily involved in managing, mandating, and regulating healthcare? That's a deeply personal area of life, not to mention one on its way toward representing 20 percent of the economy. No wonder the debate over Obamacare turned nasty both before it was passed and when repeal was proposed. When government action has such wide-reaching and inescapable effects you can't afford to lose.

Can America's political tribes learn to live with each other? Perhaps. But it will take more than dumping one controversial political figure and replacing him with another who just infuriates a different set of people. To reduce political conflict and to head off violence, politics have to become lower-stakes. We have to stop treating policy choices as weapons against the opposition and zero-sum, I-win-you-lose contests.

As a libertarian, my preferred solution is always to defer to individual preferences—to make participation in various programs voluntary, and to minimize bans, restrictions, and mandates. People are unlikely to fight over politics when political contests matter much less.

But we could also breathe life back into the federalism that motivated the country's founding Constitution. If we can't devolve decision-making to individuals (and we should), at least do so to the state and local level. Impose policy choices on as few unwilling people as possible to keep conflict to a minimum. Localized decision-making also empowers dissenters to easily move to jurisdictions they find more amenable. People are highly unlikely to fight over laws that affect the lives of people only in the next state, or another town. They're even less likely to get upset when they can make their own choices without regard to the preferences of political opponents or government officials.

If we want to bring political life and discourse in the United States back from the boiling point, we have to make politics less important. When politics and policy matter less, the silly opinions of other Americans, or the rough conduct of a politician, will be far less likely to set us against each other in the streets.

But if we continue to pretend that the battle is only over putting "the right people" in charge, you should count on disagreements remaining very hot for a long time to come.