County Spends $58 Million on a Jail, Never Uses It, Sells it for $10 Million

The Oregon jail has sat empty since it opened in 2004. 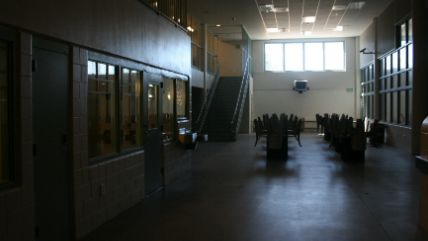 The government of Multnomah County, Oregon, is selling a jail in Wapato to a private developer for $10 million. That's much less than it paid to build the place back in 2004—the facility cost $58 million—but you can't blame the county for wanting to unload it. In the 13 years since it was opened, the jail has never held a single prisoner.

In the meantime, the authorities spent $300,000 annually to maintain the empty structure, plus $3.5 million a year to service the debt undertaken to build the thing.

Jeff Reynolds, a Multnomah County homeowner since 2009, calls the county's management of the facility "absurd." Not only did the county fail "to use the property for its intended purpose," Reynolds complains, but it "compounded the problem by refusing to use it for anything else."

Predictably, the county's chief financial officer has blamed the mess on insufficient tax revenue. But lack of funds did not stop the county from spending $600,000 on public art projects at the jail site, including such memorable works as a $180,000 sculpture intended to represent a shipwreck. A train wreck might have been more appropriate.

The fact is that the facility was finished just as crime in the area was falling, so there wasn't an obvious need for the place. Attempts were periodically made to find a niche for it, but none of them succeeded. When a county commissioner proposed to bring in 150 inmates eligible for drug and alcohol treatment, he was blocked by the corrections deputies union, which stood to lose funding if the prisoners were shifted from where they were being held before. There were several attempts to have the state Department of Corrections take over the facility, perhaps turning it into a women's prison, but that path was abandoned when the county would only agree to lease, and not sell, the unused jail.

In 2014, the county solicited ideas for what to do with the property. Seven submissions were received, including proposals to turn the facility into a community college or a garden. All were rejected. In a 2016 housing emergency, the government considered making the place a homeless shelter. That notion was dropped too, partly because of the jail's isolated location and partly because officials didn't like the optics of storing the homeless behind bars.

So far the only people to make use of the empty jail are film crews, who have used it to shoot potato chip commercials and episodes of the TV show Grimm.

After this long odyssey of failure, the Wapato saga is finally coming to an end. On Tuesday, County Chair Deborah Kafour signed a Memorandum of Understanding to sell the facility to the California-based Pacific Development Partners LLC. So far the company has been cagy about its plans for the site, but at least it won't be a drain on taxpayers like Reynolds anymore.