The Wizard of Lies starts too late in the scam and misses much. 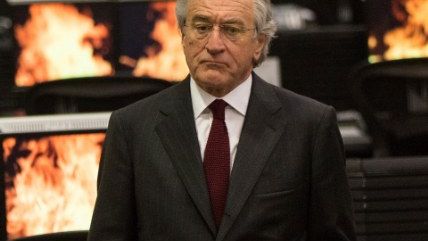 Sorry, guys. Showtime has decided not to offer advance screenings of its reboot of the milestone of television weirdness, Twin Peaks, which premieres this weekend. This is either a canny make-'em-beg marketing strategy or a desperate effort to conceal an epic bomb.

So instead of an incisive analysis of boogalooing and backwards-talking midgets, I can offer only the observation that every criminal breeds his own cult. Just as there are women who want to marry Charles Manson, there are people anxious to buy Bernie Madoff's underwear. And Madoffian salirophiliacs compose much of the audience for The Wizard of Lies, HBO's windy new docudrama on the decline and fall of the all-time Ponzi champ.

The $65 billion collapse of Madoff's smoke-and-mirrors trading empire in 2008 would seem to offer great dramatic potential. Unlike the largely faceless, institutional banking collapse around the same time that triggered the Great Recession, the Madoff scandal had an easily identifiable villain driven by evil intention rather than carelessness. And his betrayal was breathtakingly personal; the thousands of victims included most of his friends and even his in-laws. There was even a potential hero: Harry Markopolis, an investment officer at a rival firm who for a decade fruitlessly warned that Madoff's returns were too good to be true.

All these elements are present in Wizard, not to mention a marquee cast headed by Robert De Niro and Michelle Pfeiffer, with frequent Oscar nominee Barry Levinson producing and directing. Yet it all comes together with much more fizzle than sizzle.

Much of what's wrong with Wizard can be traced to Levinson's decision to go with a script by three relatively inexperienced writers (including his son Sam) that begins relatively late in the story—the day before Madoff's chicanery was exposed—and concentrates mainly on the damage he did to his own family. That precludes any real examination of any of the characters on their way to the top; all we see is their precipitous fall.

Madoff's fraud is believed to have begun in the 1970s. His sons Mark and Andrew were both traders for the company, and his wife Ruth its bookkeeper in the early days. But they all denied any knowledge of his scheming, a claim grudgingly accepted by investigators (who never charged any of the three with anything), if not the public.

Wizard follows Mark (Alessandro Nivola, American Hustle) and Andrew (Nathan Darrow, House of Cards) as they're bullied to the line of sanity and ultimately beyond it,

alternately by their parents for disloyalty—the boys were the ones who revealed the fraud to federal authorities, then refused to help raise bail money for their father—and by friends who were wiped out.

More fascinating, in a bug-under-the-magnifying-glass sort of way, is the case of Ruth (crisply played by Pfeiffer), cagey enough to give away a small fortune in jewelry before the cops can seize it, but utterly oblivious to the cracks in her cocoon of wealth and social standing until the mounting rage of her friends-turned-victims gets her kicked out of her regular beauty salon. Despite the mounting toll, she can't break away from her husband of more than five decades. As they lie in bed, awaiting for the effects of what will turn out to be a botched mutual attempt at a suicidal overdose of sleeping pills to take effect, Bernie murmurs a poignant goodbye: "We had a wonderful life." Without even a glance, she replies: "Yeah … until you ruined it."

This is all well and good, and might have made a good episode of Showtime's barbarous Wall Street drama Billions. But, having expressed every cogent thought in its head in the first 50 minutes, Wizard drags along for another tortuously repetitive hour and half, a long day's journey into utter banality. De Niro's strangely mannered turn as Madoff does not help. Long stretches of phlegmatic resignation punctuated by seemingly random bursts of sociopathic rage ("They didn't want to look too hard," he snaps of his victims at one point, "they're accomplices in some way, too") offer little in the way of illumination about how and why a seemingly talented trader started down a road he must have known would end in disaster. About the only thing that can be said for De Niro's performance is that it's more convincing than that of New York Times reporter Diana B. Henriques, the author of the book upon which Wizard is based, who somehow manages to be utterly unconvincing as herself. Don't quit your day job, ma'am