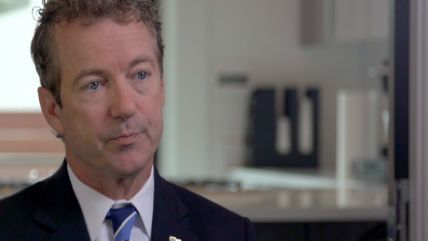 Paul expanded on those comments in a CNN op-ed yesterday:

Mandatory minimum sentences have unfairly and disproportionately incarcerated a generation of minorities. Eric Holder, the attorney general under President Obama, issued guidelines to U.S. Attorneys that they should refrain from seeking long sentences for nonviolent drug offenders.

I agreed with him then and still do. In fact, I'm the author of a bipartisan bill with Senator Leahy to change the law on this matter. Until we pass that bill, though, the discretion on enforcement—and the lives of many young drug offenders—lies with the current attorney general. […]

I urge the attorney general to reconsider his recent action. But even more importantly, I urge my colleagues to consider bipartisan legislation to fix this problem in the law where it should be handled. Congress can end this injustice, and I look forward to leading this fight for justice.

Important words. But the first response to Paul's original tweet is worth considering as well, summing up as it did what many libertarians were feeling:

@RandPaul you knew who he was and what he would do when you voted to confirm him. You didn't care.

Paul's answer to such criticism at the time was fourfold: 1) Sessions affirmed to him that the president has no right to drone non-combative Americans to death on U.S. soil; 2) the A.G. "agrees with the president" on law-enforcement issues, and therefore so would any potential replacement nomination; and anyways 3) "Democrats made it much more certain that I would vote for him by trying to destroy his character," so therefore 4) "if people want to apply a purity test to me they're more than welcome, but I would suggest that maybe they spend some of their time on the other 99 less libertarian senators."

But in an interview at Rare yesterday with his former employee and co-author Jack Hunter, Paul unveiled another reason for his vote:

"I spoke with Sessions last when he was up for nomination, which makes this move by him even more disappointing now, because it was different from what I was led to believe," Paul said via phone, indicating that at Sessions' confirmation, the senator walked away believing the new attorney general would not be pursuing this issue.

Seeing as how Sessions' drug-related punishment notions were of primary concern to Paul's fellow civil libertarians (here's just a sampling of Reason writing on the issue: 1, 2, 3, 4, 5, 6, 7, 8, 9, 10, 11), it would have been nice to know then what he had been misled to believe. One hopes that the skeptical senator will now cease granting the benefit of the doubt to Trump nominees for, say, FBI director. At any rate this paraphrase from the Rare interview sounds preliminarily positive:

Paul said that in addition to the legislation he has sponsored with Sen. Leahy, he has been talking with Republican Senator Mike Lee and also Democratic Senators Corey Booker and Kamala Harris on other ways to diminish the damage done by these federal laws.

Listen to Nick Gillespie's December interview with Rand Paul at this link.