It's only doing what it *has* to do, by Congress' mandate, which is to investigate *all* complaints. BTW, f*ck the FCC! 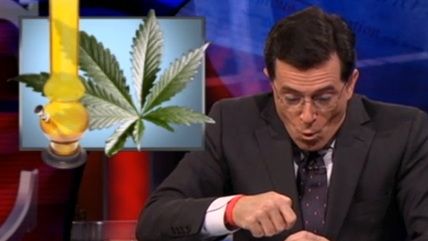 As Elizabeth Nolan Brown showed in her thorough debunking of the widespread claim that congressional Republicans had passed legislation defining rape as a pre-existing condition no longer covered under federal health-care law, the American press is characterized by groupthink and agenda-setting. The speed with which the absolutely false statement about the American Healtch Care Act (AHCA) and rape showed up in all sorts of outlets is testament to media credulity, or maybe just plain old-fashioned media bias.

Something similar has happened with one of the other big stories of last week. In an anti-Donald Trump monologue, The Late Show's Stephen Colbert said, among many other things:

"You talk like a sign-language gorilla who got hit in the head. In fact, the only thing your mouth is good for is being Vladimir Putin's cock holster."

You can watch the whole monologue below (the cock-holster line, which was bleeped both during the broadcast and remains bleeped even at the Late Show's official YouTube feed, appears around 11.10 minutes).

In the wake of the comments, a "Fire Colbert" hashtag is making the rounds on Twitter, arguing that his comments are homophobic. Given Colbert's public support for marriage equality and his obvious comfort level not only with gays and lesbians but affectionately parodying them in shows such as Strangers with Candy (in which he played a closeted teacher who was having an affair with a male colleague) and "The Ambiguously Gay Duo," a Saturday Night Live animated series about superheroes who may or may not be gay, the attacks on Colbert are nothing more than right-wing concern trolling.

Folks have also complained to the Federal Communications Commission (FCC), which is charged with maintaining content regulation for broadcast radio and television programming (for a variety of reasons, the FCC doesn't have the same mandate for cable and internet content). By law, the FCC must investigate claims that networks have aired "indecent" material (like obscenity, indecency is an utterly made-up, extra-constitutional definition of supposedly illegal speech). The agency, which is headed up Ajit Pai, a vocal and principled opponent of Net Neutrality and government regulation of speech, is doing nothing out of the ordinary here. As Pai's chief of staff, Matthew Berry, tweeted on Saturday:

But like the "Republican reclassified rape as a pre-existing condition and dropped coverage of it" meme, the FCC's requaction is being taken as prima facie evidence that the Trump administration is cracking down on critics via the very administrative state that adviser Steve Bannon promised to deconstruct. From New York magazine (which published and then corrected one of the most breathless and incorrect early stories on the AHCA) comes this from the head of the Writers Guild of America (WGA):

"As presidents of the Writers Guilds of America, East and West, we were appalled to read recent remarks by Federal Communications Commission chair Ajit Pai," WGA East boss Michael Winship and WGA West chief Howard Rodman told Deadline. "He said the FCC would investigate a joke about Donald Trump by Writers Guild member Stephen Colbert, 'apply the law' and 'take appropriate action' if the joke were found to be 'obscene.'"

"Pai's remarks are just the latest in a series of statements by the current administration indicating a willful disregard of the First Amendment. Colbert was poking fun at authority, a time-honored American tradition and an essential principle of democracy."

Well, sure, whatevs. Except for the fact that the FCC is simply following its standard-operating procedure.

So we arrive at a place where right-wingers are concern-trolling a liberal comedian as homophobic and where progressives are trolling a government bureaucracy for doing its job (double-plus-good irony: The FCC is the very agency which left-leaners believe should have the right to control all ISPs and thus the Internet via expansive Net Neutrality rules).

The solution from a libertarian perspective is pretty clear, simple, elegant—and in this case at least, hopelessly utopian: Abolish the FCC or, at the very least, decommission its role in any form of content regulation.

Indeed, it's far from clear that we've ever needed any sort of FCC to hash out technical issues and interference claims, the least-objectionable rationale for its existence. As longtime Reason contributor, Clemson professor, and former chief economist at the FCC Thomas W. Hazlett shows in his brilliant new history, The Political Spectrum: The Tumultuous Liberation of Technology, from Herbert Hoover To the Smartphone, the basic story used to justify the FCC's predecessor (the Federal Radio Comission) in the 1920s is bullshit. Legend has it that larger stations were drowning out and interfering with smaller stations' signals, ushering in period of chaos that only federal control could sort out. All sorts of ad hoc and legal redress "Regulators," contends Hazlett convincingly, "blocked competition at the behest of incumbent interests and, for nearly a century, have suppressed innovation while quashing out-of-the-mainstream viewpoints."

Beyond technical questions of spectrum allocation and related issues, it should be clear to all but the most censorious and backward-looking that there is simply no role for government to be in a position to police speech simply because it is sent via broadcast signals rather than cable, print, or the Internet. As former FCC head Michael Powell said nearly 20 years ago, "The time has come to move forward toward a single standard of First Amendment analysis that recognizes the reality of the media marketplace and respects the intelligence of American consumers." Powell was confident that if Americans were forced to choose between the First Amendment and free expression on the one hand and censorship and nanny-statism on the other, they'd push to have all media protected by the Constitution.

You can like or dislike Stephen Colbert (I'm a liker) and you can like or dislike the "cock holster" gag (I don't think it's funny and the bleeping is just sad). But in a world that is blessed with hot and cold running culture—from free porn to free Proust—the last thing any of us should give a shit about is granting the government the right to police speech. But that would require a change in law, which would require Congress to do something worth a damn. And it would help if we had a press that was capable of reality-based reporting, rather than glomming on to whatever faux outrage of the moment slides past journos' social-media feeds.

I sat down recently with Ajit Pai to talk about Net Neutrality, innovation, and freedom of expression. Here's the video of our conversation. Go here for full transcript of same.