A Matter of Steel Industry Security

Steel imports are no more a threat to U.S. national security than imported sugar or lumber or tulips. 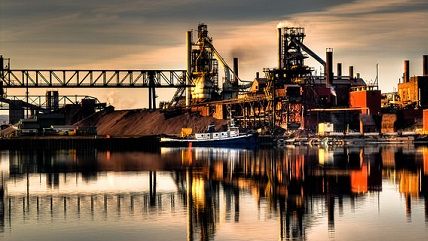 President Trump activated a seldom-used provision in U.S. trade law last week that could result in sweeping tariffs on imported steel, all in the name of U.S. "national security." The initiative only proves that the argument for industry protection has become as bankrupt as an abandoned steel mill.

The law invoked by the president is Section 232 of the Trade Expansion Act of 1962. It allows the U.S. Secretary of Commerce to investigate whether certain imported goods "threaten to impair the national security." How would they do that? By becoming so dominant in America that they drive out indigenous producers, thereby forcing the American military to rely on precarious foreign sources rather than reliable indigenous ones for its needs. If the conclusion is "yes," the president then decides whether to accept the recommendation, and if so, what actions to take, including import restrictions, to remove the threat.

Steel imports are no more a threat to U.S. national security than imported sugar or lumber or tulips. While it's true that steel imports have risen to about a quarter of U.S. consumption, domestic steel output remains robust. During the past decade, according to the World Steel Association, annual output at U.S. steel mills has been trending slowly downward but it was still an impressive 78 million tons in 2016. That ranks the United States as the world's fourth largest steel producer.

Domestic steel production far exceeds any foreseeable need by the U.S. military, which is a relatively small customer for domestic steel. The American Iron and Steel Institute reports that, in 2015, national defense and homeland security accounted for only 3 percent of domestic steel consumption. The Pentagon still needs steel for ships, tanks, and warplanes, but the demand has been flat or trending down for years.

A Section 232 investigation was last undertaken in October 2001. In its final report, the Commerce Department determined that "there is no probative evidence that imports of iron ore or semi-finished steel threaten to impair U.S. national security. There is neither evidence showing that the United States is dependent on imports of iron ore or semi-finished steel, nor evidence showing that such imports fundamentally threaten the ability of domestic producers to satisfy national security requirements."

The 2001 report found that the Department of Defense's annual requirements for steel "comprise less than 0.3 percent of the industry's output by weight (i.e., 325,000 net tons of finished steel per year)." It also found that the steel that was imported came mostly from a diverse and "safe" list of foreign suppliers, such as Canada, Mexico, and Brazil.

Fifteen years later, nothing fundamental has changed. China, one of the big trade bogeymen for this administration, accounts for only a small share of U.S. steel imports, largely because the domestic steel industry has already made effective use of anti-dumping and anti-subsidy duties to curb its imports to the United States.

The biggest threat to U.S. national security is not steel imports, but new steel protectionism. The other 97 percent of domestic steel production is consumed by a broad swath of U.S. industry, including construction, and such manufacturing sectors as automobiles, machinery & equipment, energy, and appliances.

If the Trump administration imposes new barriers to imported steel, it will drive up the domestic price of steel, imposing higher production costs on those other sectors of the economy and making their products less competitive in global markets. Economists estimate that for every U.S. worker in the steel industry, there are 60 workers in steel-consuming industries whose jobs will be made less secure by any new steel tariffs. Those tariffs will weaken, not strengthen, America's industrial base.

President Trump's Section 232 investigation is all about domestic politics, not national security. The impetus for the investigation was not from the U.S. military or defense experts, but from executives and union leaders in the domestic steel industry, who were standing at the president's side in the Oval office last week during the ceremony launching the investigation. Their overriding interest is to protect their bottom line and to pad their union membership by crippling their foreign competitors and driving up domestic steel prices, whatever damaging effect it will have on their fellow Americans.

Daniel Griswold is director of the Program on the American Economy and Globalization at the Mercatus Center.