Judge OK's DHS Tracking Plane Because It Left L.A., a 'Source City' for Drugs, Going to Philly, a 'Destination City'

Another judge rules that behaving legally is no protection from being targeted by law enforcement. 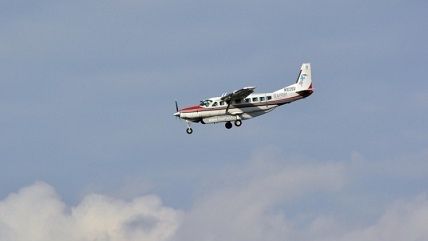 Police may have reasonable suspicion to track individuals if they are behaving strangely while traveling or using unusual means of travel, even if the behavior or means of travel are legal, Chief Judge David Brooks Smith ruled (pdf) in a case in the Third Circuit Court of Appeals involving the Department of Homeland Security (DHS) tracking a plane from Los Angeles to Philadelphia because the former was a "source city" for drugs and the latter a "destination city,"—demonstrating the vagueness of the concept of reasonable suspicion and the problem with criminalizing actions and products that are inherently non-violent.

In 2015 the pilot and passenger Raul Rosales, who brought the challenge to the court, were apprehended in Pennsylvania, where authorities found them in possession of several duffle bags' worth of cocaine. Rosales was sentenced to five years in prison and was appealing a lower court's ruling that evidence obtained based on DHS's tracking of the plane because of perfectly legal behavior ought to be suppressed

"Unusual means of travel or strange behavior while traveling, even if legal, may give rise to reasonable suspicion," Smith wrote in his disposition. "While Rosales is correct that the flight could have been that of a hobbyist and that some of the details observed… could be attributed to inexperience rather than criminal activity, an alternative innocent explanation does not undermine our conclusion."

DHS also pointed to the plane making too many stops and to a police informant who claimed to see a duffel bag on board and noticed and noticed the pilot locking the aircraft despite only exiting briefly for refueling in Albuquerque. In Oklahoma, another informant told DHS the plane had taxied backward down the runway, indicating an inexperienced pilot. DHS also said the plane's transponder had been shut off for three minutes over Kentucky. Judge Smith ruled that in combination, these legal activites were all enough to warrant reasonable suspicion.

The ruling, which was nonprecedential, meaning it doesn't add "significantly to the body of law," as Federal Circuit Rule 32.1 explains (pdf), nevertheless adds to a long list of what law enforcement can consider reasonable suspicion—from driving too slow to driving too fast, from being too relaxed to being too nervous.

"Articulating precisely what 'reasonable suspicion' and 'probable cause' mean is not possible," the Supreme Court ruled in the 1996 case Ornelas v. U.S. "They are commonsense, non-technical conceptions that deal with the factual and practical considerations of everyday life on which reasonable and prudent men, not legal technicians, act. As such, the standards are not readily, or even usefully, reduced to a neat set of legal rules."

Neat! The vague nature of reasonable suspicion highlights the importance of limiting criminal laws to actions that are violent, and not to all behaviors and products that make the right amount of the right people uncomfortable, to safeguard our freedoms, such as they are.