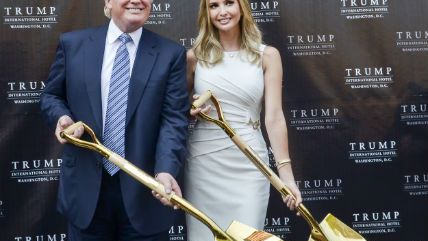 Long before Friday's Ryancare implosion, Donald Trump saw his audacious $1 trillion infrastructure plan as a way to work with Democrats and provide Keynesian stimulus to the economy. "We're…going to prime the pump," Trump told New York Times Magazine reporter Robert Draper earlier this year. "You know what I mean by 'prime the pump'? In order to get this going, and going big league, and having the jobs coming in and the taxes that will be cut very substantially and the regulations that'll be going, we're going to have to prime the pump to some extent. In other words: Spend money to make a lot more money in the future. And that'll happen." After the health care wipeout, the White House even suggested that the infrastructure bill and tax reform be packaged together, to maximize Democratic support.

Well, about that. Today Time magazine peeked under the hood of Trump's tentative infrastructure plan, and found some parts in there that will make most libertarians shudder:

The strategy, aides say, is to shell out between $100 billion to $200 billion in federal dollars, while overhauling the regulatory process, cutting regulations and offering tax credits to private companies. The White House argues the total package will propel the effective spending total well above Trump's target.

Italics mine, to emphasize the not-in-my-name stuff. Infrastructure companies do NOT need tax credits, thank you very much, they need barriers to their own investments removed. Do you want to see the kind of projects that private capital would be happy to invest in? Click on this link from our transportation brethren at the Reason Foundation, and imagine for a fleeting second a government run by sane people.

And yet arguably more remarkable than Trump's big-government opening bid on infrastructure is the hostility to which it's being greeted by the very party that's supposed to swoon: Democrats. Ladling out $200 billion in taxpayer-extracted money just isn't enough, it seems—it all has to come from government:

The approach would almost certainly foreclose any chances of winning the support of Democrats, who favor direct federal spending for infrastructure projects. Senate Democratic Leader Chuck Schumer and several colleagues have proposed $1 trillion in direct spending to repair the country's roads, bridges and ports. Trump's public-private partnership plan falls far short of that, which is one reason why Democratic Sen. Ron Wyden of Oregon calls it a "nonstarter."

The Reason Foundation took a close look at the Democrats' counter-proposal, such as it can be examined, and concluded that "this plan is nothing but a marketing piece." One important reason why:

[T]his proposal has no funding source, so it represents new deficit spending. The plan claims to be fiscally responsible by closing tax loopholes used by corporations and super wealthy individuals. However, an earlier analysis shows closing such loopholes would account for only $100 million, about 10 percent of the funding. The only point of making such an absurd claim is to play politics.

This, this, and more this. Bad enough that a Republican president wants to "prime the pump" with economically bogus government stimulus, but his would-be partners in the opposition party are pretending that that $20 trillion thingie over there just doesn't exist. Denial is not just a river in Washington.

Both Trump and the worse-on-this-issue Democrats are politicking in a way that acts as if the last eight years didn't happen. The federal government spent a whopping $105 billion on infrastructure vis the Recovery Act alone, an undertaking that the White House touted at the time as "the largest new investment in our nation's infrastructure since Eisenhower built an Interstate Highway System in the 1950s." So where's our shiny new interstate? What on earth makes anyone believe that this time we'll spend the money wisely?

There are some people smarter than Trump's stated infrastructure priorities at or near the Department of Transportation, including Secretary Elaine Chao. Here's hoping when the deal gets out of the brainstorming phase it'll at least shed the tax-credit baggage (we are supposed to be doing tax reform right now, no?).

But the Democratic fantasia about this stuff is depressing, and makes even curiouser President Trump's battle against the House Freedom Caucus. If infrastructure is this administration's big hook to reel in those elusive centrist Democrats, what does it say that even an overly government-centered framework in an era of colossal debt is a "nonstarter" among the target audience? How lefty will Trump have to go to make up for the Tea Party conservatives he plans on kicking to the curb? And as Rich Lowry points out in Politico, the conditions for Trumpian cross-partisanship are considerably worse now than even three months ago:

His path not taken in January would have been to give an eye-openingly unifying Inaugural Address with less carnage and more kumbaya. Immediately invite Chuck Schumer to the White House and tell him, "Chuck, you're not leaving this building until we agree on an infrastructure package." Take the resulting big-spending proposal and dare the GOP leadership to defy him. Pass it with a bipartisan coalition. And invite as many Democratic public works-supporting mayors as possible to the White House signing ceremony. […]

Now that the initial health-care bill has gone down, there's loose talk from the White House of wooing Democrats, but a lot has transpired in the course of the past few months that makes this much harder. Most importantly, the left-wing "resistance" to Trump is fully activated and prepared to exact punishment on any quislings.

The Trump resistance, judging anecdotally by my protracted exposure to it, is inextricably linked with an anti-corporate animus and Bernie/Elizabeth Warren-style economics. My Brooklyn neighborhood, for example, was a helluva lot more exercised by Betsy DeVos's fondness for non-public schools than Jeff Sessions's old-timey views on drugs.

Is there a silver lining to all these bad policies and worse politics? Why, yes! Congress's inability to get big things done suggests, tautologically, that Congress will get fewer big things done. Sadly, that also extends to what should be small things, like passing basic appropriations bills. No matter what, as predicted here, April is shaping up to be one of the most deeply stupid political months in modern Washington history. At least we'll always have baseball!