DEA Seized $4 Billion From People Since 2007. Most Were Never Charged with a Crime 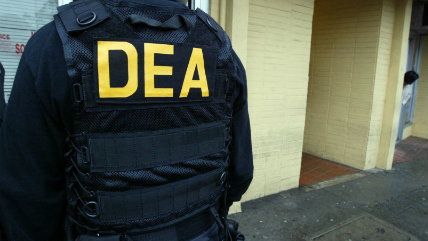 The Drug Enforcement Administration seized more than $4 billion in cash from people suspected of drug activity over the last decade, but $3.2 billion of those seizures were never connected to any criminal charges.

A report by the Justice Department Inspector General released Wednesday found that the DEA's gargantuan amount of cash seizures often didn't relate to any ongoing criminal investigations, and 82 percent of seizures it reviewed ended up being settled administratively—that is, without any judicial review—raising civil liberties concerns.

In total, the Inspector General reports the DEA seized $4.15 billion in cash since 2007, accounting for 80 percent of all Justice Department cash seizures. Those figures do not include other property, such as cars and electronics, which are favorite targets for seizure by law enforcement.

Darpana Sheth, an attorney for the libertarian-leaning nonprofit law firm Institute for Justice, said in a statement that the report's findings "fundamentally undercut law enforcement's claim that civil forfeiture is a vital crime-fighting tool."

"Americans are already outraged at the Justice Department's aggressive use of civil forfeiture, which has mushroomed into a multibillion dollar program in the last decade," she continued. "This report only further confirms what we have been saying all along: Forfeiture laws create perverse financial incentives to seize property without judicial oversight and violate due process."

More than a dozen states have passed reforms to civil asset forfeiture in recent years in response to civil liberties concerns, but the practice remains robust in part because of joint federal and state drug task forces, which share forfeiture proceeds through the Justice Department's Equitable Sharing Fund. According to the report, the Justice Department's Asset Forfeiture program participants have collected $28 billion over the last decade.

Only 44 of the 100 seizures were connected to or advanced a criminal investigation. The majority of seizures occurred in airports, train stations, and bus terminals, where the DEA regularly snoops on travel records and maintains a network of travel industry employees who act as confidential informants.

DEA agents then detain and question travelers with large amounts of cash, and, if they determine the money is linked to drug activity, seize it, even if there is no hard evidence that it is connected to illegal activity. As the Inspector General notes, these agents "rely on their immediate, on-the-spot judgment." The passenger is then released, bereft of money but otherwise free to go.

The report highlights one case where DEA agents detained a man at the airport and, after searching his duffel bag, found several rubber-banded bundles of hundred-dollar bills:

When a task force officer explained that the U.S. currency in the bag was going to be seized pending further investigation, the passenger asked whether he could keep some of the currency to travel home. The passenger asserted that all of the currency in the bag was his, and the task force officers allowed him to retain $1,000. This seizure resulted in an administrative forfeiture of $27,000 to the U.S. government, and the DEA explained to the OIG that, other than the events surrounding the seizure, there was no subsequent investigative activity or additional law enforcement benefit.

If the DEA task force agents thought that man's cash was connected to drug activity, why allow him to keep some of it? If they weren't sure, why take it in the first place? The answer, of course, is there is no logical or legal rationale for this sequence of events.

"We found that different task force officers made different decisions in similar situations when deciding whether to seize all of the cash discovered," the Inspector General wrote. "These differences demonstrate how seizure decisions can appear arbitrary, which should be a concern for the Department, both because of potentially improper conduct and because even the appearance of arbitrary decision-making in asset seizure can fuel public perception that law enforcement is not using this authority legitimately, thereby undermining public confidence in law enforcement."

Most of these types of seizures are never challenged. The Inspector General found petitions were filed in only 20 percent of DEA cash seizures, but of those, 40 percent saw money fully or partially returned to the owner, indicating that there may be a significant amount of unfounded seizures that go unchallenged.

The Inspector General recommended the Justice Department collect data to evaluate whether asset forfeitures and seizures advance criminal investigations, which it currently does not do.

In a written response to the Inspector General included in the report, the Justice Department's Criminal Division disputed both the report's findings and methodology. It maintains that civil asset forfeiture is "a critical tool to fight the current heroin and opioid epidemic that is raging in the United States."