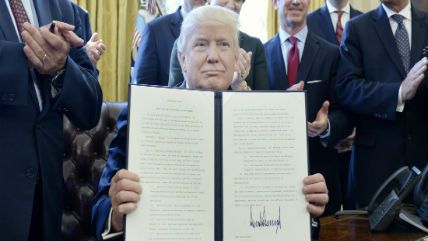 President Donald Trump's big moves today on energy/climate policy, assessed in detail by Science Correspondent Ronald Bailey below, are far from his only deregulatory heaves this week. On Monday, for example, the president signed into law four regulatory rollbacks presented to him via the Congressional Review Act (CRA), or three more than were enacted between 1996-2016 combined.

The previously obscure CRA, which Scott Shackford wrote about at length in January 2015, gives Congress 60 working days to reverse any new regulation added to the Federal Register. (That's congressional working days, so in fact the 115th Congress has had the ability to pick off any unwanted Obama-administration reg enacted after mid-June of last year.) The only successful deployment of the CRA prior to Trump came in March 2001, when President George W. Bush signed out of existence a controversial November 2000 Clinton administration rule requiring employers to prevent ergonomic injuries in the workplace. The unified Republican Congress of 2015–2016 presented five CRA rollbacks to President Barack Obama, and he vetoed each one.

President Trump now has seven CRA notches on his belt, and more coming his way. The latest, as summarized by USA Today:

* The "Fair Pay and Safe Workplaces" rule, which barred companies from receiving federal contracts if they had a history of violating wage, labor or workplace safety laws. That regulation, derided by critics as the "blacklisting" rule, was already held up in court. […]

* A Bureau of Land Management rule known as "Planning 2.0," that gave the federal government a bigger role in land use decisions. The rule was opposed by the energy industry.

* Two regulations on measuring school performance and teacher training under the Every Student Succeeds Act, a law Obama signed in 2015 with bipartisan support.

The other three CRA reversals so far have been a Security and Exchange Commission rule requiring publicly traded resource-extraction companies to disclose payments made to foreign governments, a Department of Interior framework governing stream runoff of coal mining operations, and a Social Security Administration policy (covered by Scott Shackford here) to share the names of people it classifies as having a mental illness with the federal gun database in order to deny them access to weapons.

Other Trump deregulatory activity has included:

* His January 30 executive order requiring agencies to identify two existing regulations to kill each time they promulgate a new one.

* His February 24 executive order instructing each agency to appoint a Regulatory Reform Officer, who will head up a task force that suggests regulations to euthanize.

* His appointment to the Supreme Court of Neil Gorsuch, a judge most famous for his criticism of excessive deference to regulators.

* His appointments to the Cabinet critics of and reformers to the departments they now head, including Education's Betsy DeVos, Energy's Rick Perry, Transportation's Elaine Chao, and Health and Human Service's Tom Price.

* His nomination of drug-approval-process critic Scott Gottlieb to head up the Food and Drug Administration (FDA), and his three paragraphs in the State of the Union Address talking up FDA reform.

* His appointment to head up the Federal Communications Commission regulation skeptic Ajit Pai.

There is no doubt that the early Trump presidency has made deregulation a priority. It remains to be seen how much Congress will share that appetite, and how much the administration's efforts will be constrained or counterbalanced by Trump's own meddlesome proclivities into other areas of individual and corporate behavior.