A story about a teenager who was bullied by the president for creating a website that mocked him was not true, but it was sadly plausible. 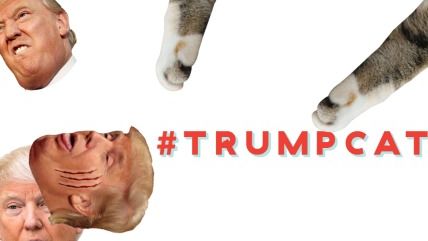 Yesterday I decided not to write a post about a San Francisco teenager who supposedly received cease-and-desist letters from the Trump Organization in response to her website mocking the president. Although the widely repeated story was sadly plausible in light of Donald Trump's legendary touchiness and litigiousness, the teenager, identified only as "Lucy," was interviewed by just two outlets, neither of which posted copies of the letters, which the Trump Organization unequivocally denied sending. I contacted the reporters who had communicated with Lucy to see whether and how they had verified the existence of the letters but did not hear back from them. For a good reason, it turns out: The story was a hoax, and the reasons so many writers fell for it are instructive.

On Tuesday morning, under the headline "Exclusive: Trump Sics Lawyers on Teen for Making Silly Site Where Kittens Punch Him," the New York Observer's Sage Lazzaro reported that Lucy originally located her website, which enables visitors to swipe images of Trump's face with virtual cat paws, at TrumpScratch.com. Lazzaro said Lucy switched to KittenFeed.com after receiving "a cease and desist letter from Trump's general counsel stationed in Trump Tower on Fifth Avenue in NYC." The letter complained that Lucy was sullying the Trump brand. Lazzaro said the letter, which was "confirmed by the Observer," "begins [by] touting [Trump] as a 'well-known businessman' and television star and boasts, 'As I'm sure you're aware, the Trump name is internationally known and famous.'" Lucy told Lazzaro the move to KittenFeed.com did not placate the Trump Organization, which "still came at me."

According to a Hollywood Reporter story by Ashley Cullins that was published on Tuesday evening, Trump was irked by a KittenFeed link to "an anti-Trump shirt that is available for purchase on Amazon." Cullins reported that "Lucy removed that link, and hasn't heard anything from the [Trump Organization] since." The lesson, according to Lucy: "This is a president who's clearly more concerned about what people think of him than doing things of substance….The fact that as president he still has teams going around bothering to shut down silly sites like mine is outrageous." Similarly, Lucy told Lazzaro, "It's so sad that his administration is focused more on being liked, burying real news and taking down sites like mine as they supposedly make him look bad."

In a statement published yesterday afternoon, The Hollywood Reporter says it "now has significant doubts about the authenticity of the letter that was initially provided to media outlets by Lucy, who says she is a 17-year-old based in San Francisco and the proprietor of Kittenfeed.com." The letter, dated March 1, appears below the statement. "It's a fake," Alan Garten, the Trump Organization's general counsel, told The Hollywood Reporter. "This letter did not come from us." Garten gave the Observer a similar denial: "This is completely false. No such letter was ever sent by us." So far the Observer has not published a correction or retraction.

As Bryan Menegus points out at Gizmodo (which initially repeated the story, along with Fox News, the New York Daily News, The Daily Telegraph, The Independent, Raw Story, New York, and various other outlets), the timing of the letter is problematic, since it supposedly was sent "three weeks after the site went live," and "trumpscratch.com was first registered on March 22″—the day after the Observer story. (The Washington Free Beacon's Alex Griswold made the same point on Wednesday.) Furthermore, Menegus says, KittenFeed.com "was registered before trumpscratch.com" and acquired by its current owner "around March 2," which contradicts Lucy's story. Yesterday Snopes noted the same clues that Lucy, or whoever played that character, was not on the level.

Menegus also notes that "the site auto-plays Rick Astley's 'Never Gonna Give You Up,'" which is "a classic internet bait-and-switch: deceptive text or a disguised link would lead credulous people to the forgettable '80s jam instead of whatever they were looking for." Although "it's hard to say what's really going on," he concludes, "it sure looks like an opportunist who wanted their site to go viral managed to troll the Observer, the Reporter, and, in the end, us."

Anti-Trump bias is not the only reason this hoax succeeded. The story was accepted because it was consistent with what we know about Trump's character from his behavior before and after he took office. He is an amazingly vain, petty, and thin-skinned man, the sort who publicly brags about the size of his penis and the size of his inauguration audience, who files frivolous lawsuits against people who insult, mock, or diminish him, and who has never hesitated to bully critics with threatening letters from his lawyers.

Given Trump's long history of bullying people who make him look bad, the idea that he would threaten to sue a teenager over a silly website is entirely within the realm of possibility. And given his long history of flagrantly misrepresenting reality, the fact that a spokesman denied the story might almost be considered a confirmation.

None of this is meant to excuse the reporters and editors who thought this story was too good to check. To the contrary, the episode provides a much-needed lesson in how easily journalists can be led astray by their preconceptions, even when those preconceptions are well-grounded in fact.

When Trump suggested that bomb threats against Jewish institutions, which had been cited as evidence that his election had fostered a rise in anti-Semitism, might not be what they seemed, he was widely mocked, because we have come to assume the president is making shit up, especially when his ego is at stake. But yesterday the Israeli police announced that they had arrested the person they believe was behind the vast majority of those threats, and it turned out he was an Israeli Jew. Trump has discredited himself to the point that his statements are automatically dismissed even when he happens to be right. That is a problem for him, but it is also a problem for us.